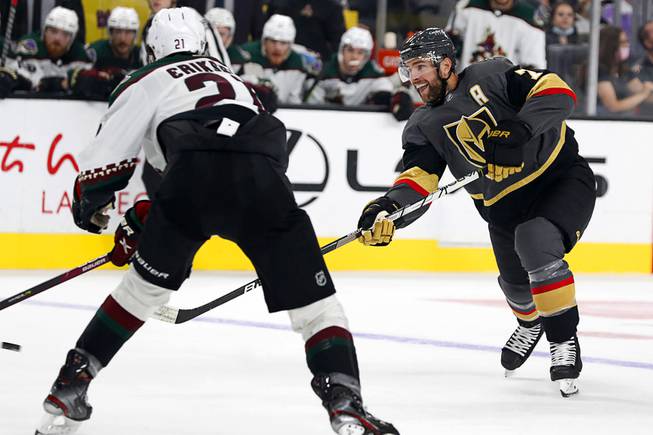 Vegas Golden Knights defenseman Alex Pietrangelo (7) takes a shot on goal during the first period of a NHL preseason hockey game against the Arizona Coyotes at T-Mobile Arena Tuesday, Oct. 5, 2021.

Vegas dropped its final home exhibition game, 3-1, to the Arizona Coyotes on Thursday night, but the Golden Knights didn’t seem to be sweating the result.

After the game the Knights focused not on the scoreboard but on their performance, which is getting closer and closer to being regular-season ready.

“Tonight, that was a preseason game,” Knights coach Pete DoBoer said, “good, bad and ugly. A little bit of everything. It’s obviously not where we want it to be, but I’m not sure anybody is yet in preseason. I’m confident we’ll get there.”

Arizona took the lead on a power play goal by Christian Fischer late in the first period. After William Karlsson was sent to the box for tripping, Fischer parked himself in the crease and swatted his own rebound out of mid-air and past Vegas goaltender Robin Lehner.

The Coyotes extended their lead early in the second period when Andrew Ladd chased down a loose puck in the corner and whipped a pass in front of the net. Travis Boyd was there to redirect it by Lehner to make it 2-0.

The Knights had trouble turning possession into scoring chances, especially in the opening period. They registered just five shots in the first 20 minutes and 26 total for the game.

Vegas’ best even-strength scoring chance came one minute into the contest, when Mark Stone connected on a long pass that led Max Pacioretty ahead of the Arizona defense for a breakaway. Pacioretty carried it deep and deked Coyotes goaltender Karel Vejelka to the ice, but lost the angle in the process; Pacioretty’s shot hit the side of the net.

Vegas finally got on the board with 1:26 left in the second period. Ten seconds into a power play, Chandler Stephenson fed Karlsson with a cross-ice pass and Karlsson fired a close-range shot past Vejelka to cut the deficit to 2-1.

Arizona put it away midway through the third period when Ladd gained control of a loose puck, cut across the crease and slipped a backhand shot under Lehner’s pad to make it 3-1.

Lehner played the entire game for the first time this preseason and finished with 26 saves. After the game, the 13-year veteran said he feels ready for the start of the season, with some minor work to be done over the next week.

There was a scare midway through the second period when top prospect Peyton Krebs went into the boards hard while racing to break up an icing call. Krebs lost his balance and went airborne before crashing into the wall at an awkward angle, but he popped up apparently no worse for wear.

Karlsson wasn’t particularly happy with the way the Knights played, but acknowledged there is still time for some fine-tuning before the games really count.

“We could have been better today,” Karlsson said. “I feel like they outworked us. I think we had some problems breaking out. So a little bit to work on.”

The Golden Knights will wrap up the preseason on Saturday at San Jose, then return to T-Mobile Arena to host the expansion Seattle Kraken on Tuesday in the regular season opener.