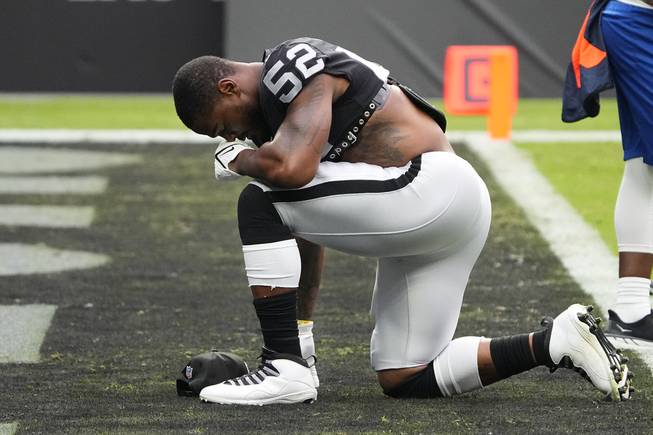 When he’s not on the practice field, Raiders linebacker Denzel Perryman often has a coffee cup in his hands while at the team facility in Henderson.

It’s a curious choice because if there are any players on the team who need an energy boost, Perryman wouldn’t seem to be among them. Since Las Vegas traded for Perryman at the end of training camp, he’s been one of the most galvanizing forces on the team with a penchant for aggressive play, hard hits and a fiery demeanor.

Perryman, a seventh-year veteran acquired via trade with Carolina in exchange for a sixth- and seventh-round pick, has been among the most impressive players on the Raiders’ rebuilt defense and leads the team with 48 tackles through four games. He’s known as a first-rate run-stuffer and will have a chance to show as much in a Week 5 game at 1:05 p.m. Sunday at Allegiant Stadium against the Chicago Bears, one of the run-heaviest offenses in the NFL.

Fair or not, there’s a microscope on the Raiders’ current defense, specifically their front seven, going into the game because of who’s on the other side. Former Raider captain Khalil Mack leads the Bears into Las Vegas for the first time.

Raiders defensive end Khalil Mack (52) and quarterback Derek Carr (4) before a game against the Colts in Oakland, Calif., Saturday, Dec. 24, 2016.

Many fans, and even quarterback Derek Carr, counted on Mack leading the Raiders’ defense for years to come and still rue the day he was traded in 2018 for a package of draft picks that included a pair of first rounders. But the Raiders appear to have a better defense now than they ever did with Mack, even in his Defensive Player of the Year season in 2016.

They rank ninth in the NFL in giving up 5.2 yards per play. First-year captain Maxx Crosby, who’s tied for second in the NFL with 16 pressures this season, is regarded as the closest equivalent to Mack as a homegrown edge-rusher who’s turned into a star with the organization.

But Perryman could also be seen as a surprising spiritual successor to Mack given his current role with the Raiders. He doesn’t have the pass-rushing ability of Mack or Crosby, but he’s using the same mixture of veteran leadership and tone-setting tackling at linebacker as the former is currently employing in Chicago — the same mixture that Mack would be utilizing in Las Vegas if the Raiders had kept him beyond his first four seasons in the league.

“He’s an alpha — a-l-p-h-a,” Raiders coach Jon Gruden said of Perryman shortly after the trade became final last month. “I like those guys. He’s a fiery, alpha presence and I think we need that on our defense.”

The biggest concern Gruden mentioned with Perryman was his ability to stay healthy. The former second-round pick out of Miami has never played a full season, and his absence throughout most of training camp was reportedly why Carolina was open to dealing him.

But staying on the field hasn’t been a problem so far in Las Vegas. He’s started every game and logged 230 total snaps, sixth-most among the defense and second-most among non-defensive backs.

Perryman impressed teammates and coaches by stepping in without any adjustment period after practicing less than two weeks with the Raiders, though he did have the advantage of previously playing under Bradley with the Chargers.

“I was in the same system for four years and it’s almost like picking up an old book again and just going through the notes,” Perryman said earlier this season.

Las Vegas’ defense kept it in the game in Los Angeles last week, forcing four straight three-and-outs in the first half after the Chargers scored on their opening drive. Perryman put it all into motion, twice filling a gap on first-down to level running back Austin Ekeler.

They were two examples of the kinds of plays he’s made all year.

“It looks good on paper but me personally, there’s a lot of little small things like missed tackles, close calls, small things people don’t see,” Perryman said of his season so far before the game.

Perryman, and the Raiders’ defense, did eventually wear down. Ekeler went off for 117 rush yards on 15 carries, and Chargers quarterback Justin Herbert targeted Perryman on a key 4th-and-2 play at midfield late in the fourth quarter.

Cook leapt for a one-handed catch over Perryman to extend a drive that ended with a touchdown to all but lock up a Chargers’ victory. But Perryman was in good position and has played well in pass coverage all year.

He hasn’t made every play, but he’s made as many as anyone on the Raiders’ defense. He’s played a major role in implementing the type of defense that fans years ago hoped Mack would eventually build in Las Vegas.

“We got some swag,” Perryman said of the Raiders’ defense. “I feel like every game day everyone shows their personality in some way, some form, but we all do it together.”