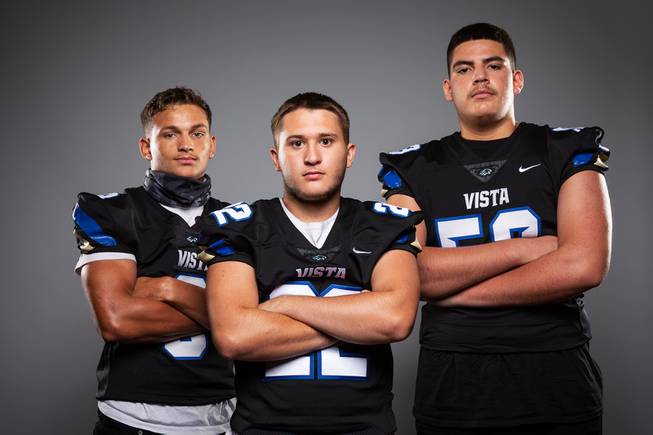 Members of the Sierra Vista High School football team are pictured during the Las Vegas Sun’s high school football media day at the Red Rock Resort on August 3rd, 2021. They include, from left, Malachi Green, Dax Dietz and Lawrence Vigil.

That’s what happens when you rely on younger players, have a new coaching staff and are playing quality opponents. In fact, the Mountain Lions didn’t play an opponent with a loss until their fifth game.

But, Goodell stresses, “we were staying close in games and getting better.” And those improvements have been obvious in winning their past two games, including a 39-12 victory Friday against Mojave.

Quarterback Tarrance Masnica had a pair of 1-yard touchdown runs to pace the offense, and Dax Dietz and Jeremiah Eveni Sili also scored on the ground. Defensively, Ramil Williams had an interception return for a score.

“When you have a new defensive coordinator, new offensive coordinator and new head coach, it takes time to gel,” Goodell said. “The biggest thing is our kids really like each other. We are young and we are starting to learn.”