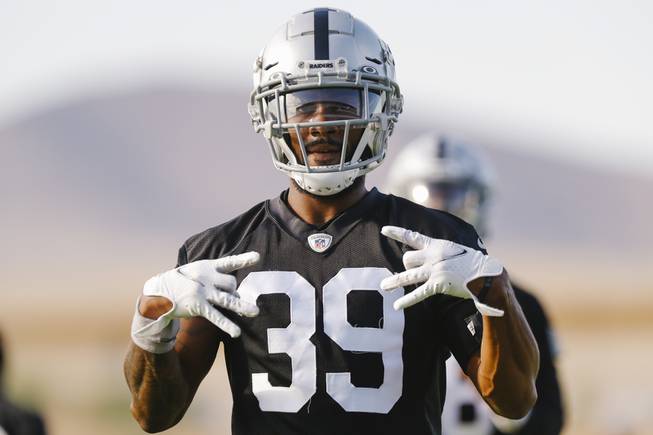 How will Raiders’ cornerback corps look going forward with Mullen, Arnette out?

Raiders rookie Nate Hobbs bounced between outside cornerback and nickelback spots throughout the team’s Week 4 loss against the Chargers.

The standout fifth-round pick out of Illinois made plays at both positions and seemed comfortable at either spot, at least outwardly. Internally, Hobbs said it took some mental wherewithal to adjust to the shifting responsibilities.

Hobbs may need to be prepared to keep hitting the switch in the Raiders’ game hosting the Bears at 1:05 p.m. Sunday, if not indefinitely going forward. Las Vegas lost its second and third outside cornerbacks to injury, Trayvon Mullen (toe) and Damon Arnette (groin), last week in Los Angeles to throw the defensive backfield into a state of flux.

Both setbacks could be serious and result in injured-reserve designations, according to coach Jon Gruden, though the team has neither decided for sure nor announced exactly how it will rearrange the depth chart.

The only certainty among the cornerback corps is that Casey Hayward will remain as the top coverage option. Hobbs could play either in the slot or on the outside next to Hayward, though Gruden seemed to hint at the latter, which would make sense from a quality standpoint.

Hobbs had been the Raiders’ second-best cornerback this season even with Mullen and Arnette healthy, and playing him in the second starting spot on the outside would keep him on the field more.

“I think I got off to a good start but honestly I could have played better and I’m just trying to improve every day,” said Hobbs, whom Pro Football Focus recently rated as the eighth-best defensive rookie in the league so far.

“I just feel like I can get better recognizing things quicker and just being more patient and things like that.”

Hobbs has played 213 snaps, which translates to a near starter’s share of 75%, but there will be competition for his workload going forward even without Mullen and Arnette.

Las Vegas got cornerback reinforcements this week by signing Brandon Facyson off the Chargers’ practice squad and designating Keisean Nixon for return off injured reserve.

“A quick study,” Gruden said of Facyson. “We expect to have him up and ready and available.”

Also factoring into the situation and likely to see the field in some form are second-year cornerback Amik Robertson and safety Roderic Teamer. They both played bigger roles against the Chargers when Mullen and Arnette went down.

Robertson was the primary fill-in on the outside, while Teamer shifted down to nickelback when Hobbs moved inside.

“(Defensive backs coach Ron) Milus does a great job in that room making sure that everybody knows what everybody is doing,” Bradley said. “The drill work: Corners will do drill work as a flat defender and just for situations like that. So we weren’t perfect, but guys could go in there and it looked like football.”

Robertson notably held up well when pressed into action, a welcome change from last season when he looked overwhelmed as a rookie. He said he was down on himself going into the offseason, but encouraged by a meeting with Gruden when the coach told him to keep working and that more opportunities would come.

Those opportunities are here now. The Raiders’ cornerback rotation is going to change significantly with playing time up for grabs for players like Robertson, Teamer, Nixon and Facyson.

“You got to adapt, and you got to keep rolling,” Gruden said. “So, guys step up. A lot of people step up when given the opportunity and I’m really proud of those guys.”