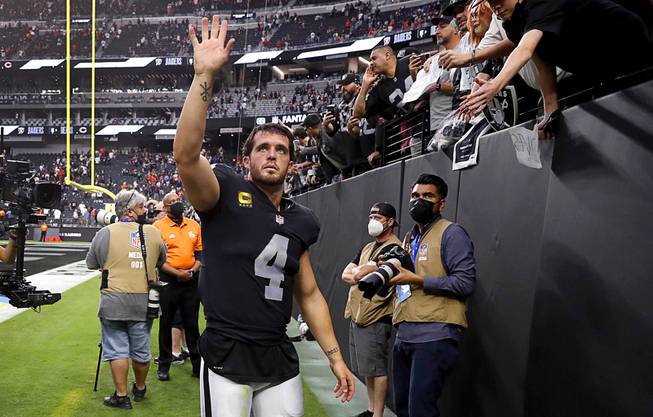 A final chance at a game-tying drive came up short, as Derek Carr overthrew Bryan Edwards on 4th-and-5 to seal the Raiders’ fate in a demoralizing 20-9 loss to the Chicago Bears.

The nine points represents the fewest scored by Las Vegas since they only managed two field goals in a 43-6 loss to the Atlanta Falcons in Week 11 of last season. How did things go so wrong for the Raiders, who have quickly gone from undefeated to 3-2 on the year?

It’s difficult to say how much of an impact Jon Gruden’s racist comment and the subsequent controversy had on the Raiders’ preparation for this game, considering the story broke less than 48 hours before kickoff. But there’s no denying the team came out flat in the first half, with a litany of penalties, dropped passes, miscommunications and other mental lapses allowing Chicago to jump out to an early 14-3 lead.

Even by Raiders’ standards, the flags were flying at a furious pace. The first quarter featured two plays in which the Las Vegas offense committed two holding penalties on the same play, and after Chicago’s second drive—in which Las Vegas was called twice for roughing the passer—the Raiders had been flagged six times for 48 yards. They finished with 10 penalties for 82 yards. Their heads simply weren’t in the game.

The second half opened with a similar thud. On a key third-down play, Carr scrambled out of the pocket and lofted a pass to wide-open Bryan Edwards, who had gotten behind the defense for a potential game-changing play. But Edwards let the 40-yard bomb clank off his hands, incomplete. On the Raiders’ next possession, Carr tossed an interception. For the game, Carr completed 22-of-35 for 206 yards, with no touchdowns and the INT.

Sloppy, disinterested, distracted—take your pick. Whichever word you choose to describe the Raiders’ performance on Sunday, it applies. And some, if not all of it, can probably be attributed directly to the current firestorm at the top of the organization. The revelation of Gruden’s comment has created a mess, and if this game showed anything, it’s that it has to be cleaned up or it will continue to leak onto the field.

The Raiders made a decision during the week to reformat their already rebuilt offensive line, shuffling some players to new positions in an attempt to find the best five-man mix. It did not work.

Rookie Alex Leatherwood moved from starting right tackle to starting right guard and struggled just as much inside, allowing several pressures and getting flagged for a holding penalty (which was declined by Chicago). Brandon Parker took over at right tackle and similarly got pushed around by former Raider Khalil Mack, who recorded a sack and four solo tackles.

Carr was sacked three times, officially, and once unofficially—Mack dropped him again on a crucial 2-point conversion attempt in the fourth quarter. And the line did not open many holes on the ground, either, as Las Vegas running backs gained just 59 yards on 17 carries (3.5 yards per attempt).

Might the linemen settle into their new roles in the coming weeks and execute better? Maybe—just because it didn’t pay immediate dividends on Sunday doesn’t mean it won’t work in the future. But Las Vegas unquestionably has a blocking problem, and despite the moves made this week, it’s not trending in the right direction.

For all their sloppiness and undisciplined play early in the game, the Las Vegas defense turned in a second half that was worthy of a victory—until the Bears’ final drive.

After the Raiders trimmed Chicago’s lead to 14-9, Chicago took possession at its own 15 yard line with nine minutes to play. Another stop would have given Carr and the offense a chance to drive for the lead, but ten plays and 6:16 later Cairo Santos kicked a 46-yard field goal to give the Bears an eight-point advantage.

The key play on the clock-killing possession was a 3rd-and-12 conversion at midfield on which defensive coordinator Gus Bradley called for five defenders to play zone coverage just beyond the line to gain. Bears receiver Darnell Mooney released down the middle of the field, turned between two defenders and caught a pass from Justin Fields for an easy 13 yards to extend the drive.

It wouldn’t be fair to pin much blame on the defense. After the bad start, that unit kept Chicago off the board for the entirety of the second half while the offense tried to get its act in gear. But on the most important play of the game, they went conservative and allowed a long conversion that Bradley will be second-guessing all week.