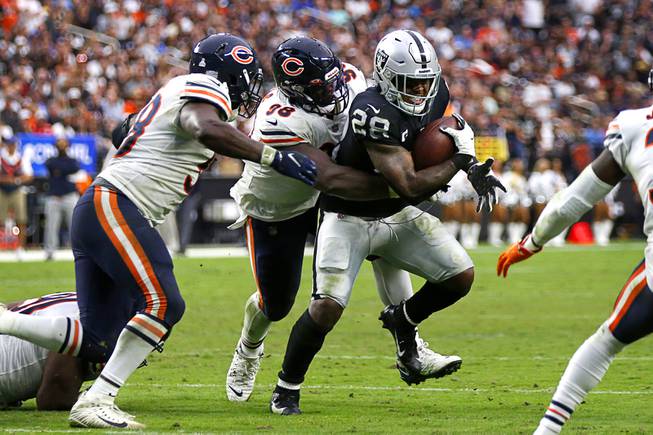 Jon Gruden told them everything.

When the Las Vegas Raiders’ players arrived at their Henderson team headquarters Friday morning, several hours before news broke of racist comments the coach had sent via e-mail in 2011, Gruden called a meeting and detailed his mistakes. He apologized and asked his team to learn from his mistakes and for their forgiveness, which several players said they granted.

“I’ve been around this guy for three years now and I’ve never felt a certain type of way about him,” running back Josh Jacobs said. “He’s never rubbed me a certain way, that type of way. What he said was what he said at the end of the day, but I definitely trust him. It was 10 years ago, people grow.”

The fallout from Gruden’s comments, which were directed towards NFL Players Association Executive Director DeMaurice Smith, continued into Sunday’s game against the Bears as analysts widely condemned Gruden’s words. The topic may have felt inescapable, but the Raiders’ players said they were able to ignore it.

They said the controversy played no role in Las Vegas’ 20-9 loss to Chicago that dropped it to 3-2 on the year.

The surest way to prove all the chatter wasn’t a distraction would have been to go out and put on the type of performance that led the Raiders to their first 3-0 start in nearly 20 years. That didn’t happen.

Coming off a sloppy Monday Night Football loss in Los Angeles to the Chargers, the Raiders one-upped the errors and were somehow even worse. Offensively, it was one of the worst performances since Gruden’s first year back on the sidelines in 2018 — only the fourth time the Raiders had been held to single digits in the span.

For the second straight week, Las Vegas’ defense kept it in the game, forcing four three-and-outs and two other drives where it allowed only one first down. But, in a role reversal from previous seasons where the Raiders could score but not stop opponents, the offense rarely capitalized.

“We just haven’t played at the standard we expect,” quarterback Derek Carr said. “Not even close.”

Carr had his worst game of the season so far, throwing for less than 6 yards per attempt, barely eclipsing 200 yards and committing one interception to no touchdowns. He had a few overthrows, including one to Bryan Edwards on a 4th-and-5 play from the Raiders’ own 30-yard line with less than two minutes remaining that all but ended the game.

The receivers didn’t help him out, either. Top target Darren Waller dropped two passes including one potentially big play over the middle in the third quarter with the Raiders trailing 14-3.

Las Vegas’ defense bailed the team out again afterwards by quickly forcing a punt – with young cornerbacks Nate Hobbs and Amik Robertson continuing to play well in expanded roles — and the offense came alive for one of the only stretches of the game. Second-year receiver Henry Ruggs caught a long pass and a pair of personal foul penalties on the Bears set up Jacobs for the Raiders’ lone touchdown — a leap over the middle of the line from 1-yard out to make the score 14-9.

Chicago sacked Carr on the ensuing two-point conversion attempt. The Bears sacked Carr three other times, including one by the quarteback’s close friend and former Raider Khalil Mack.

Jacobs had only 48 yards on 15 carries in his second game back from toe and ankle injuries.

“I watch the film and I’m like, ‘(expletive), I don’t know what y’all want me to do honestly,’” Jacobs said of the offensive line struggles not leaving any room to run. “But I’m very optimistic about the guys getting better and I believe in the guys. I see the way they work every day. I think it’s just an amount of time before we start putting the pieces together.”

Jacobs scored earlier in the game, on the Raiders’ second drive, but a holding penalty on Parker erased the points. The Raiders settled for a 31-yard field goal from Daniel Carlson after a drive where they were flagged four times for holding, albeit two times apiece on two of the same plays.

The flags went beyond the offensive line as a pair of defensive personal fouls also led the way to the Bears’ first touchdown, a two-yard pass from Justin Fields to Jesper Horsted. The Raiders totaled 10 infractions for 82 yards.

“Way too many penalties,” Gruden said. “I think when you have eight holding penalties and you struggle in short-yardage situation and field position is hard to come by, it’s going to be a fist fight and they won this one today.”

Gruden tired of the fight for his own reputation. He publicly answered a couple questions on his comments for the first time before saying he would no longer address the matter.

“I can’t tell you how sick I am,” Gruden said. “I apologize again to De Smith, but I feel good about who I am and what I’ve done my entire life. I apologize for my insensitive remarks. I had no racial intentions with those remarks at all. I’m not like that at all.”

Gruden said he had not been in contact with the NFL but expected to hear from them in the next couple days. It remains unclear if the league could punish him for the e-mail considering he wasn’t employed as a coach, but rather as an ESPN commentator at the time.

One of the biggest immediate risks for Gruden was losing his team over the scandal, but the four players who spoke after the Bears’ loss were unanimous that hasn’t happened. In their words, the poor performance in the second straight loss was merely a matter of bad timing amid everything else going on.

“I don’t think it had anything to do with (Gruden),” Jacobs said. “All the guys kind of talked about how we felt about it and how he treats players. He’s a player’s coach so everybody was kind of not like over-analyzing it. I don’t think it’s going to affect (the locker room) because our guys are led by each other.”