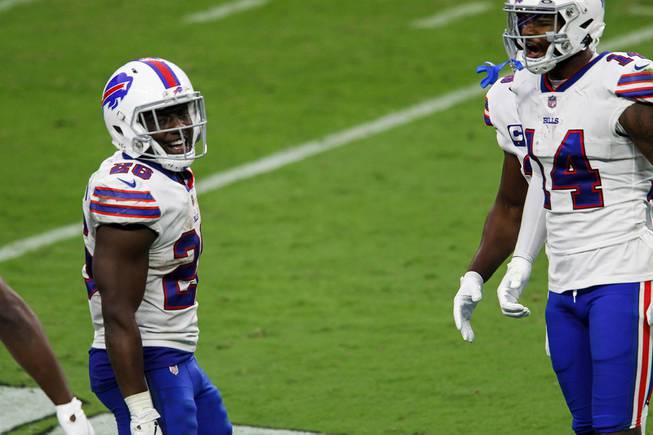 Buffalo Bills running back Devin Singletary (26) smiles after scoring a touchdown against the Las Vegas Raiders in the 4th quarter of their game at Allegiant Stadium Sunday, Oct. 4, 2020.

Unders are surging to start the NFL season.

Through four weeks of play (and one game), unders have gone 38-27 overall on totals. It’s a 180 from last season, when overs were rolling in at an unprecedented pace to start the season.

Bettors have credited several factors for the lower-scoring start including fans being fully back in stands, a higher rate of penalties being called and just sheer randomness.

What’s the real reason? Probably a combination of all the aforementioned causes — and many more.

I hit an under in the Sunday Sweats column last week as part of a nice 4-2 showing and I’m going back to another one involving one of the same teams today.

Both games between these two teams went under by double digits a year ago, and this one may follow the same pattern. They’re divisional opponents that know each other well, which traditionally makes for a profitable under angle, but this goes beyond that. Arizona’s offense has thrived against for four straight weeks against mediocre defenses (yes, even the Rams’ stop unit is relatively struggling to start the season at No. 20 by Football Outsiders’ DVOA). San Francisco has the best defense its seen so far. The 49ers have some injuries, but they managed them well despite a 28-21 loss to the Seahawks. Seattle managed only 4.3 yards per play in the contest. Arizona’s defense has been even better and an underrated part of its success. This looks like a 24-21 type of game. Everyone likes more bets so I’m including the pick’em suggestion on the over 49 in Lions-Vikings from earlier in this week in the grading here as well. But, with the preamble about the early superiority of unders, I felt obligated to share a lower-scoring wager as well.

Like I called for last week, I still believe the basic teaser strategy of going through the 3 and the 7 is going to backfire sometime soon. It just hasn’t yet and, mathematically, it’s the best way to play these so let’s keep going. Browns at Chargers looks like the closest game of the week, and getting more than a touchdown with either team is a great deal. I’m more worried about the Patriots as a road favorite, though their roster is too much better than the Texans’ to expect them to lose. I certainly wouldn’t lay the 8 points, but getting New England down below a field goal feels relatively safe. I also considered going through the 7 and 10 with the 49ers here at +11.5. I still think that’s a decent option, but it’s a little more volatile with the wild card of how San Francisco quarterback Trey Lance will perform in his first start.

After hitting a two-teamer last week, I intended to gamble and bump this category up to a three-teamer this week. But I couldn’t do it because I love this pairing of two sides entirely too much. These are the two moneylines I like the most on the board, and Boyd has better-than-average prices on both. New Orleans is finally getting an opponent with as much injury attrition as it in Washington. The Saints are also a lot better than the market is currently implying coming off of their inexcusable collapse to the Giants last week. Injuries should also help the Eagles, as the Panthers’ defense is no longer what it was at the start of the season.

I honestly thought this number might be a mistake when I first saw it. Then I checked other sports books and saw it was in the same range — 27.5 or 28.5. So it’s not a wrong line; it’s just a bad line. Kansas City is absolutely terrible against the run, and until sports books start pricing opposing running backs accordingly, it’s worth betting against it on the ground every week. Yes, Buffalo is (wisely) not a run-first team but it should stick to the ground game more than normal here. The Bills will likely want to keep Patrick Mahomes off the field and attack the Chiefs’ weakness on the ground. Singletary might go over this number in the first half. Reminder to check tomorrow’s Raiders’ preview for another prop bet that will be graded here.

This appears to be the best price in the world on the Rays right now. It’s not a huge edge, but I’d make the Rays slightly above 50% probability to win Game 3 so I’m grabbing the plus price. Nathan Eovaldi pitched well for the Red Sox in the play-in game against the Yankees at Fenway Park earlier in the week, but even in one of his best seasons this year, he’s been volatile. He might be great again, or he might be pedestrian. Tampa Bay is also the best team in the playoffs at managing its pitching staff and bullpen. The Rays may not stay the underdog for long.