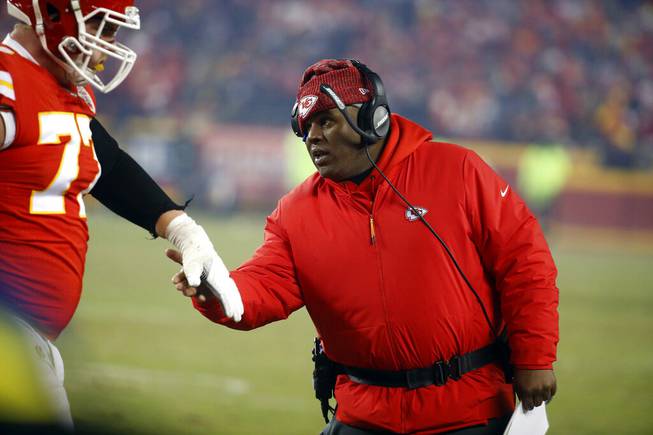 In this Jan. 20, 2019, file photo, Kansas City Chiefs offensive coordinator Eric Bieniemy greets a player during the second half of the team’s AFC championship NFL football game against the New England Patriots in Kansas City, Mo. One year ago, Bieniemy and San Francisco 49ers defensive coordinator Robert Saleh missed out on the coaching carousel despite being coordinators of the two Super Bowl teams. The two figure to be near the top of many of the lists of possible head coaching candidates again this offseason when the NFL is hoping some new rules lead to more opportunities for minority coaches.

That reality may still be sinking in for fans of the Las Vegas Raiders a day after the coach resigned amid the revelation of his racist and derogatory emails, but the situation is very real for the organization itself and has required swift action.

The first order of business was appointing an interim coach, which happened shortly after Gruden’s ouster with the naming of Rich Bisaccia as the stand-in for the rest of the season. Bisaccia has been a special teams coordinator in the NFL for 19 years, including the last four with the Raiders, and he’s stepping into an unusual spot, to say the least.

While most interims take over teams later in the season after the head coach has been fired and all hope has been lost, Bisaccia is taking the reins of a 3-2 team that would currently be the No. 6 seed in the AFC playoffs if the season ended today. And there are 12 games remaining on the schedule, an eternity in NFL time.

So when it comes time to name a permanent head coach, the 61-year-old Bisaccia may have a head start. If he can somehow get the Raiders back on track and steer them into the postseason against all odds, he’d have to be strongly considered to keep the job.

Oddsmakers, meanwhile, have already put out their favorites to be named full-time coach, and the names vary in their degree of familiarity.

Atop most lists is Kansas City offensive coordinator Eric Bieniemy. The 52-year-old has been a hot name during the coaching cycle the past two offseasons but has failed to land a head job, possibly because he is viewed by some as a caretaker to an offense built and maintained by Andy Reid. Bieniemy also has a checkered past that includes several run-ins with police during his time as a college and NFL player, which may not be what the Raiders are looking for after the Gruden fiasco.

If Davis values previous head coaching experience, there is an interesting pool of candidates from which to choose. Tampa Bay defensive coordinator Todd Bowles is coming off a Super Bowl win in which his unit held the explosive Chiefs offense to nine points, and prior to that, he was the head coach of the New York Jets for four years (though that stint wasn’t impressive, as he went 24-40).

Doug Pederson won a Super Bowl as head coach of the Philadelphia Eagles and is not employed after getting fired last year. He posted a 42-37 record in five years with the Eagles and made the playoffs three times, and his quarterback-friendly system should intrigue the Raiders.

Somewhat interestingly, the Raiders have several former head coaches already on staff. The problem is, they all have really bad track records as head coaches. Defensive line coach Rod Marinelli guided the Detroit Lions to an 0-16 record in 2008 and went 10-38 in his three years as head coach there. Defensive coordinator Gus Bradley went 14-48 in four years with the Jacksonville Jaguars (giving him the lowest winning percentage among head coaches all-time). Offensive line coach Tom Cable took over as an interim head coach for the Raiders in 2008 after Lane Kiffin was fired and earned the full-time nod for the next two years; during that time, Cable posted a 17-27 record and allegedly punched an assistant coach. So yeah, there’s a reason Bisaccia was given the interim job ahead of the more experienced internal options.

If experience is not an issue and Davis wants to hone in on a young, up-and-coming coordinator type, there are several enticing names, starting with Carolina offensive coordinator Joe Brady. A former assistant under Sean Payton in New Orleans, Brady was responsible for supercharging the LSU offense in his one season in Baton Rouge, then he was hand-picked to be the Panthers’ OC under Matt Ruhle. Just 32 years old, Brady has Carolina ranked 16th in scoring this season (23.0 points per game).

Former Boise State quarterback Kellen Moore is another head coach in waiting. The 33-year-old has been the Dallas Cowboys’ offensive coordinator since 2019, and his attack is second in the NFL at 34.0 points per game. Byron Leftwich has been the OC in Tampa Bay since 2019, and last year he helped the Buccaneers score 30-plus points in four straight playoff games en route to winning the Super Bowl. Buffalo OC Brian Daboll has the Bills’ offense ranked No. 1 in the league at 34.3 points per game, and he gets credit for developing Josh Allen into a full-fledged NFL superstar.