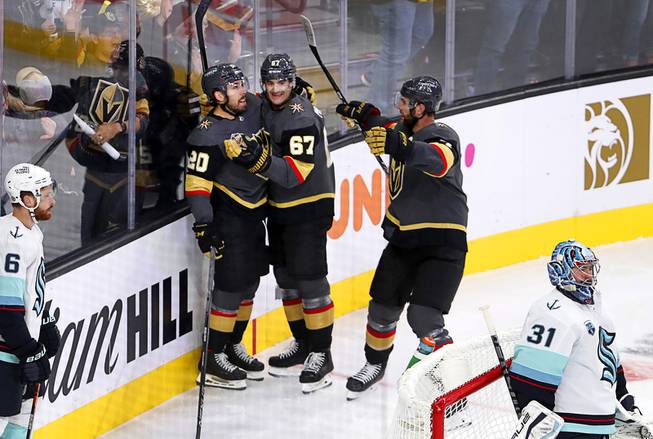 Vegas Golden Knights center Chandler Stephenson (20) celebrates with Max Pacioretty (67) and Alex Pietrangelo (7) after scoring during the third period of an NHL hockey game at T-Mobile Arena Tuesday, Oct. 12, 2021. Stephenson deflected a puck off his skate, a goal that held up as the winner in a 4-3 Golden Knights victory.

The ESPN broadcast of the game flashed up during the second intermission that the Golden Knights are 90-0-1 all-time in the regular season when holding a three-goal lead. Considering their 3-0 lead had turned to 3-2 by that time, and Seattle had evened the game not much later, it was pertinent.

The Golden Knights though, made sure to pick up all-time victory No. 91 in those situations while denying the Kraken win No. 1 ever. Chandler Stephenson deflected a puck off his skate 35 seconds after Seattle tied the game, a goal that held up as the winner in a 4-3 Golden Knights victory at T-Mobile Arena on Tuesday.

Vegas withstood a ferocious start to the first game in franchise history by the visitors, surviving a dangerous scoring chance and a penalty 33 seconds after the puck drop. The Golden Knights answered with two goals on their first three shots, one each by Max Pacioretty and Jonathan Marchessault. Pacioretty added another on a tip from a Nicolas Hague shot in the second, and Vegas led 3-0 at the 6:43 mark of the second.

Seattle though, wasn’t prepared to get shut out in its first game. Ryan Donato and Jared McCann scored about a minute apart from close to the net to cut the lead to 3-2 heading to intermission. Morgan Geekie fired a missile into the net early in the third, and just like that the Kraken climbed all the way back.

Then Stephenson ensured Seattle would not receive the storybook ending it fought so hard for. His play was reviewed, but replay determined there was no “distinct kicking motion” that would have overturned the goal. It stood, and the Golden Knights improved to 1-0-0 for the fourth time in five years.

Seattle finished with a 4-3 edge in shots on goal.

The Seattle Kraken had no intention of going down quietly.

Vegas scored to increase its lead to three goals in the second period, but the Kraken responded with two quick strikes, and trimmed the score to 3-2 heading to the second intermission at T-Mobile Arena on Tuesday.

Mark Stone picked up right where he left off a season after leading the Golden Knights with 40 assists and 61 points. He had the main helper on Max Pacioretty’s goal in the first, then caught a pinching Nicolas Hague and fed him for a nifty wrister that Pacioretty deflected for his second goal of the game to put the Golden Knights up 3-0 at the 6:43 mark of the period.

Vegas, buoyed by a pair of power plays, controlled the first half of the period including 11 of the first 13 shots. The Kraken though seemed to make getting to the net a point of emphasis at intermission, and turned the contest back into a close one with two goals from in close.

The first came from Ryan Donato, picking up a rebound off a Vince Dunn shot and depositing it into the net on the backhand, the first goal in Kraken franchise history. The next was the result of a sea of bodies causing havoc in front of the net and allowing Jared McCann’s centering pass to pinball off a Vegas defender and into the net.

Both goals were listed by the official stat sheet as coming from 8 feet away from the net, an area in which Seattle had a decisive advantage over the Golden Knights.

The first shift in Kraken history was about as dangerous to Vegas as it could be without scoring a goal. They had two shots and drew a penalty in 27 seconds. It didn’t matter at all once Max Pacioretty scored on the Golden Knights’ first shot of the game.

Seattle controlled much of the early-goings Tuesday, but the Golden Knights scored twice on their first three shots of the game and led 2-0 after the first period of the season-opener at T-Mobile Arena, the first game in the expansion Kraken’s history.

The Kraken outplayed Vegas for large stretches, including taking an 8-3 shots advantage into the halfway mark of the period, They were relentless on the forecheck, hustling to pucks and winning plenty of 50-50 battles. When the Golden Knights generated a few chances though, the made them count.

The first was Max Pacioretty, collecting the puck from Mark Stone at the left circle and lasering it by Phillip Grubauer at 3:10 to put the Golden Knights on top.

Next up was Jonathan Marchessault, beating Grubauer 1-on-1 on a slick piece of stickwork and tucking the puck behind him at 6:36.

All the momentum gained by Seattle’s hot start had evaporated, and Vegas was firmly in control. Even on a power play that was ineffective and led to a short-handed chance, Robin Lehner poked away Brandon Tanev’s offering at Seattle’s record book.

The Kraken led 9-6 in shots on goal, but Vegas made sure Seattles’s quality wasn’t there if the quantity was: high-danger chances registered at 1-1 by stats site Natural Stat Trick.

Zach Whitecloud, always one of the most energetic Golden Knights, couldn’t contain his smile in the interview room this morning, offering a cheery greeting to the assembled media and sharing the opinion of plenty of hockey fans around the valley.

“I don’t think there’s anyplace, anywhere anyone would rather be than Vegas on opening night, and that includes the players,” the defenseman said.

Adding to the excitement is the opponent: the Seattle Kraken, the expansion franchise playing its inaugural game, the same way Vegas did five seasons ago in Dallas. Puck drop is scheduled for 7 p.m. at T-Mobile Arena.

The game, which will be televised on ESPN, is the first of an 82-game marathon Vegas hopes will culminate in its first Stanley Cup after two straight years ending in the league’s final four.

“You don’t get to start, unfortunately, where you finished and get another crack at it,” Vegas coach Pete DeBoer said. “You’ve got to go through the whole process again, and that’s part of the journey, and that’s part of having a different group every year. This group gets to write their chapter in the book and you have to start from Day 1, and it’s not going to be easy.”

The Golden Knights won their first-ever game in 2017, kicking off a magical season that made it all the way to the Stanley Cup Final. This year’s version of the squad is expecting the Kraken to look for the same, playing their own first-ever game after a six-game exhibition slate.

There’s no Marc-Andre Fleury-level superstar on this expansion team, but the Kraken have some big names of their own, including goaltender Philipp Grubauer, the Vezina Trophy finalist from the Avalanche last season.

The Golden Knights’ projected opening night lineup comes with a few surprises. Dylan Coghlan, a defenseman who played at times as a forward last season, wore a white forward jersey at morning skate. DeBoer said he expects him to take some shifts on defense as well tonight.

The biggest surprise, though, was the inclusion of rookie Pavel Dorofeyev. The 20-year-old winger was added to the season-opening roster, which was assumed to be a cap-related move to help Vegas reach its full long-term injured reserve pool with Alex Tuch out for much of the season. But there he was at morning skate, and DeBoer said it’s looking like he will play.

Of all the Golden Knights’ forward prospects, Dorofeyev would not have been the pick for many. Drafted in the third round in 2018, Dorofeyev struggled in his native Russia before signing with the Silver Knights last season. He played 24 games with AHL Henderson, amassing 13 points in 24 games.

“Obviously he didn’t play an exhibition game, so you’re not sitting there going, ‘Well why is he up and somebody else isn’t?’ There’s a reason for that and it’s in the math department upstairs,” DeBoer said. “However a young guy gets in the lineup, it’s an opportunity for him to make a statement.”

The Golden Knights are not at full strength. In addition to missing Tuch after an offseason shoulder surgery, William Carrier and Nicolas Roy were injured in the preseason, and Mattias Janmark is in COVID-19 protocol.

It’s something the Kraken have in common with tonight’s hosts. Four regulars are in COVID-19 protocol, including forwards Jared McCann and Joonas Donskoi, who were expected to be two of their top scoring threats. Another player, Yanni Gourde, was injured in the offseason and is unavailable for the game.

“We’re pretty excited,” Vegas captain Mark Stone said. “We got a little nicked up in training camp, but guys are fired up and ready to go.”

With Golden Knights win, hockey returns to Las Vegas in full force and feels so right