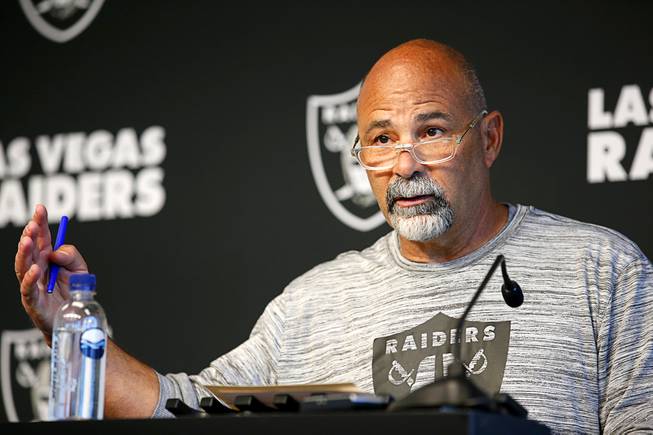 Rich Bisaccia, who has taken over the Raiders’ coaching duties on an interim basis after the sudden departure of Jon Gruden earlier this week, speaks with reporters Wednesday, Oct. 13, 2021, after practice at the Intermountain Healthcare Performance Center in Henderson.

Raiders owner Mark Davis spoke to the players first, detailing the sequence of events that led to coach Jon Gruden’s resignation after a series of disparaging and offensive emails leaked Monday night.

General manager Mike Mayock followed, laying out resources the team planned to make available to help with the ensuing emotions and ease the transition to interim coach Rich Bisaccia, who had the final word. Bisaccia shared his expectations and vision for the team going forward, steering the conversation back to football.

On Wednesday at the Raiders’ headquarters in Henderson, an extended team meeting dominated the schedule on the first day back to work and practice since Gruden’s humiliating exit. The most powerful words of all, however, were shared by the players themselves as several team captains spoke up throughout the session.

“And boy were they eloquent,” Mayock said. “The common denominator from the players has been focus and professionalism. That’s what I’ve gotten back from them. It’s, ‘We’ve worked too hard. We’ve put too much into this. We believe in Rich and we’re going forward.’”

That’s the way it must be if Las Vegas plans to salvage a once-promising season starting with a road game Sunday at Denver amid virtually unprecedented circumstances. Much of the immediate focus falls on Bisaccia, the 61-year-old who’s spent 10 years at two different spots as an assistant head coach and special teams coordinator on Gruden’s staff.

He’s dreamed of an NFL head-coaching opportunity and got choked up looking back on his career at the conclusion of a 20-minute introductory news conference, but he knows it will be short-lived and unpleasant if his players aren’t right mentally. He said his priority was keeping them as comfortable as possible given the circumstances.

Bisaccia tried to keep things familiar throughout practice. During the individual-drill portion open to media, he stayed in his usual spot on the far north field with the kickers and punters while giving position coaches and coordinators their usual space to operate.

He praised the team for blocking everything out and having a successful first day preparing for the Broncos. Quarterback Derek Carr went as far as to say there were “no mistakes today,” before correcting himself and commenting that there are always areas to improve.

But the eight-year captain was impressed with his teammates’ resolve and realization that with a current 3-2 record, “everything is out in front of us that we wanted from the beginning.”

Waller was one of the captains to speak up in the morning meeting and summarized his message as a call to embrace uncertainty and adversity as an opportunity for growth. He emphasized to his teammates that it was alright to be stressed and confused.

No matter how hard Mayock and Bisaccia tried to start installing a sense of normalcy, Wednesday had nothing of the sort. The Raiders hosted an uncharacteristic crowd of 25 media members — the limit capacity under the NFL’s continued COVID-19 protocols.

Nervous tension was so palpable at the start of practice that linebacker Denzel Perryman waved to the media and yelled to try to lighten the mood. Carr instinctually expected to hear from Gruden when he first finished stretching and threw on his helmet.

“I was waiting for him to click in the headset and start talking to me, make a joke, make me laugh, get me going, fire me up and it was (offensive coordinator Greg Olson’s) voice today,” Carr said. “Don’t get me wrong: I love (Gruden), you hate the sin. For me, no one is perfect. … I’ve grown to love him so much. We spent so much time together. We’ve been through so many battles. We’ve been through so many things together. He’s always had my back. He’s always been there for me.”

That was pretty close to the consensus on Gruden from everyone who spoke Monday — a respect of the man during their time together but a condemnation of his words behind closed doors.

“It’s disappointing but I’m somebody who comes from the space of I want to offer somebody grace and allow them to learn from what they did,” Waller said. “That’s what I’m trying to do right now for Coach, because a lot of people want to cancel him, and I understand that. What he said was inexcusable but at the same time, where do we offer grace for him to learn and grow?”

There was one notable absence Wednesday, as defensive end Carl Nassib, the first openly gay player in NFL history on an active roster, requested a personal day to process the fallout of Gruden’s emails, which reportedly included widespread use of homophobic language. Mayock granted the time off without a second thought, emphasizing that Nassib is “a community of one.”

Nassib’s teammates also stood behind him.

Mayock planned to meet with Nassib on Wednesday but Bisaccia also stressed that his office door was open to all of his players, now and forever. Outside of practice, he spends most of his days “mingling” around the facility to form a connection with as many players as possible, and that routine isn’t going to change.

The only way the Raiders can get through the upheaval of the Gruden situation thrust upon them will be by supporting their players, meaning Bisaccia just might be the right person for the job.

“I’d like to think they feel like they can come to us on a personal level,” Bisaccia said. “I have a thing I do with the players: When we grade them, when I grade them on special teams, I grade the jersey number, I don’t grade the person. When they come up to our office, I’m talking to the person.”