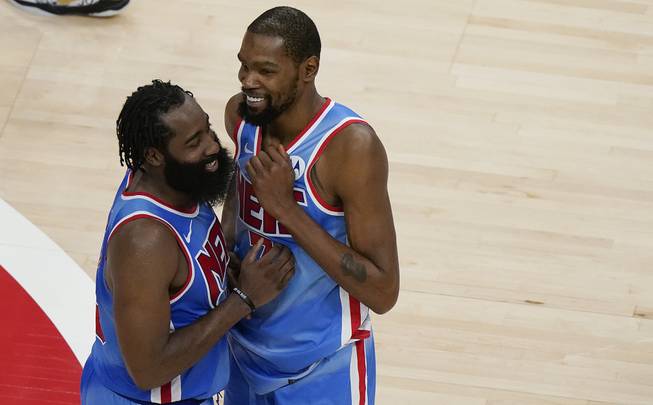 Three different champions and three different runners-up have emerged in each of the past three NBA seasons, making for only the second time in the past 40 years so many different franchises have been represented at the sport’s pinnacle.

It’s been a near-unprecedented run of parity, largely because of the league’s shifting power landscape in the wake of superstars switching teams. With player movement via trades and free agency exploding in frequency and basketball’s global popularity growing to unearth more talent, many have proclaimed this will be the new normal.

Not so fast. History has shown that the NBA, more than all the other major American sports leagues, is ultimately dominated by the best players, especially when a collection of them band together.

The Brooklyn Nets have the best collection of players entering the upcoming season—and it’s not even close, not even with Kyrie Irving starting the season away because of his failure to comply with New York’s COVID-19 vaccination laws. Kevin Durant and James Harden still give the Nets more than enough frontline star power while Irving’s situation continues to play out.

The talent level on the Nets’ roster, which includes three other multi-time All-Stars in addition to the aforementioned Big Three, is every bit as overwhelming as the Miami Heat and Golden State Warriors teams of the 2010s. And yet, Brooklyn comes into the season priced significantly higher to win the title than any of those teams ever did, giving gamblers a can’t-miss betting opportunity ahead of the 2021-22 season, which tips off October 19.

William Hill sportsbooks list the Nets at 3-to-1 to win the NBA Championship, denoting less than a 25% chance after adjusting for the house’s hold percentage.

Yeah, right. That’s a good bet to make regardless but Irving returns or the Nets trade him and get anyone comparable in return, they might be worth playing at any plus-price.

A sliver of Durant’s shoe on the three-point line at the end of regulation in Game 7 of the Eastern Conference semifinals against the Milwaukee Bucks was all that held off the Nets last season—despite everything conspiring against them. Neither Harden nor Irving were healthy for the series between the NBA’s two best teams, and it still took overtime in the final game for eventual champion Milwaukee to prevail. Had both those players been healthy, the Bucks would have been lucky to last five games.

There was supposed to be an adjustment period when Brooklyn traded for Harden in the middle of last season, but that never happened. With him on board, the Nets instantly became one of the most efficient offensive teams in NBA history, even though their Big Three played less than 10 games together due to injuries and COVID-19 diagnoses. It would take extraordinarily bad luck for Harden and Durant to spend so little time on the floor together again this season, but even if it does, the Nets may still have enough talent to remain the favorite to win the title.

It’s been a welcome change of pace to see teams like last year’s Bucks (as high as 12-to-1 in the middle of last season) and the 2018-19 Toronto Raptors (who opened at 60-to-1) prevail in the NBA Finals recently. But those titles remain novelties by NBA standards.

The Nets’ reign is coming, and bettors should get in while they can.

What about the West?

Minus the Nets and Bucks, the Western Conference is seen as a more wide-open race. That’s fair, but don’t discount the chances of the defending West champion Phoenix Suns the way the betting market appears to be doing.

The Suns are 10-to-1 to win the West at Circa Sports and might be worth playing at anything above 5-to-1. Some are characterizing the Suns’ rise as a one-year oddity, but that’s a mistake. With a young roster—aside from future Hall of Fame point guard Chris Paul—they still have room to grow.

Phoenix, unlike Milwaukee, did benefit from minimal missed time to injuries, but that has become the norm with the Suns and doesn’t appear to be coincidence. Phoenix has one of the most renowned training staffs in all of sports dating back more than 10 years.

A proven basketball projection model, DARKO, tabs the Suns to win the most games in the West by a relatively comfortable 4.5-victory margin this season.

They won’t be as popular as the new-look Los Angeles Lakers or now-healthy Warriors, but the Suns will be every bit as good, if not better.

Forget splitting the votes; if the Nets are as strong as expected, one of their stars has the best chance to win the Most Valuable Player award.

Throw out Irving. He’s talented enough, but a clear third option to Durant and Harden with a damaged reputation among voters.

Durant recently came in first in ESPN’s annual NBA Rank series rating the best players, but that was largely because of his exceptional play last postseason. Brooklyn rested him liberally throughout the regular season in preparation for the playoffs and will likely take the same approach this year.

Harden is the most durable of the three and the most likely to pace the Nets on a nightly basis. MVP is a regular-season award, and few players in the regular season are as consistent at Harden.

Thx: ESPN to use VGK instead of VGS for Golden Knights