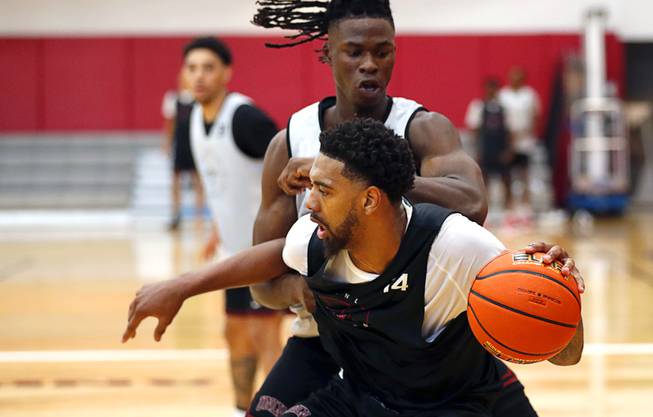 As Kevin Kruger reassembled the UNLV roster this offseason, he and his staff put particular thought into the kind of frontcourt they wanted to build. The tenets they seemed to settle on were athleticism and versatility, with an eye toward the defensive end of the court.

At the midway point of preseason practice, Kruger believes they’ve accomplished that goal.

UNLV brought in four transfers at the power forward and center positions, and together they should give Kruger plenty of options when it comes time to mix and match against opposing frontcourts.

Fifth-year Texas transfer Royce Hamm was the first big man to commit to UNLV. Hamm only logged more than 10 minutes per game once in his four years at Texas, maxing out at 12.3 minutes in 2019-20, but Kruger and his staff are enamored by his physical attributes.

At 6-foot-9, Hamm can defend multiple positions, which Kruger values.

“I think Royce is somebody that could guard all five positions,” Kruger said. “He can go get a rebound with anybody in the country. He’s fast and mobile at that quote-unquote ‘big’ spot.”

Oklahoma transfer Victor Iwuakor committed a few days after Hamm. The junior played 8.7 minutes as a freshman at Oklahoma and 10.8 last year as a sophomore, but like Hamm he has intriguing tangibles.

An explosive athlete at 6-foot-7, Iwuakor has impressed the coaching staff with his motor.

“With Vic and Royce especially you’ve got two guys who are elite-level athletes,” Kruger said. “They play at a very high level competitively. They’re versatile.”

Though perhaps less versatile than Hamm and Iwuakor, center David Muoka brings another athletic element to the frontcourt. The 6-foot-10 junior earned Southland Conference Defensive Player of the Year honors in 2020-21 by virtue of blocking 2.9 shots per game.

Kruger’s final addition to the big-man rotation was Pacific transfer James Hampshire, a 7-foot-1 fifth-year senior who plays a more traditional game under the basket.

Hamm displayed his athleticism during Tuesday’s practice. In 5-on-5 play, he set a screen on the wing, rolled to the basket, caught a bounce pass and elevated high above the rim to throw down a loud two-handed dunk. It was an athletic, authoritative finish that no one on last year’s UNLV team could have replicated.

Hamm vouched for the new collection of big men.

How Kruger eventually decides to deploy his big chess pieces remains to be seen. Whether he wants to play one traditional center, a smaller switchable center or roll will multiple big men at the same time, UNLV is going to have options.

“I think it gives us a lot of flexibility,” Kruger said. “I think we could play Vic and Royce together. We could play Vic and James, or Royce and David, and you’ve got a big-time rim protector back there but then you’ve also got elite-level athlete at one of those ‘big’ spots. You could also go small and play them at the traditional 5-spot and really do some fun things defensively.”