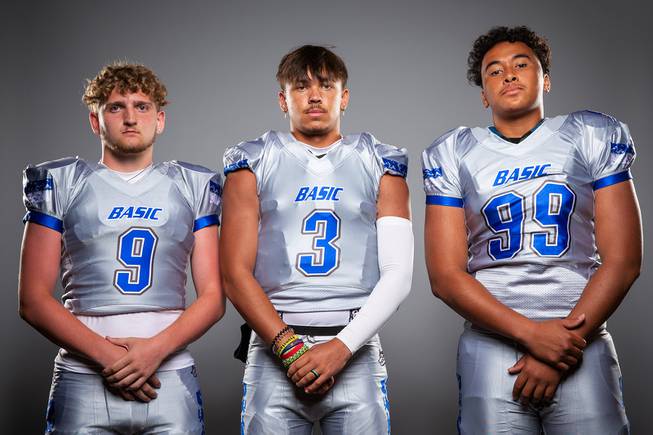 Members of the Basic High School football team are pictured during the Las Vegas Sun’s high school football media day at the Red Rock Resort on August 3rd, 2021. They include, from left, Levi Fulton, Damian Gramajo and Allen Danielson.

The Basic football team blocked two punts and had an interception return for a touchdown in a 38-0 victory today over visiting Del Sol.

After narrow defeats in the past two weeks, Maddox Bradley blocked a punt on Del Sol’s initial possession to give Basic the ball inside the 5-yard line. Robert Wren did the rest with a rushing touchdown.

Thomas Toia returned the second blocked punt for a touchdown, and Levi Fulton had the interception return for a score.

Treyson Redd contributed a receiving touchdown on a pass from Damian Gramajo, who returned after missing last week’s double overtime loss at Durango. And two weeks ago, Basic was defeated by one point on a missed kick.

“We are trying to put it all together and hopefully be playing our best for a playoff run,” Basic coach Jeff Cahill said.