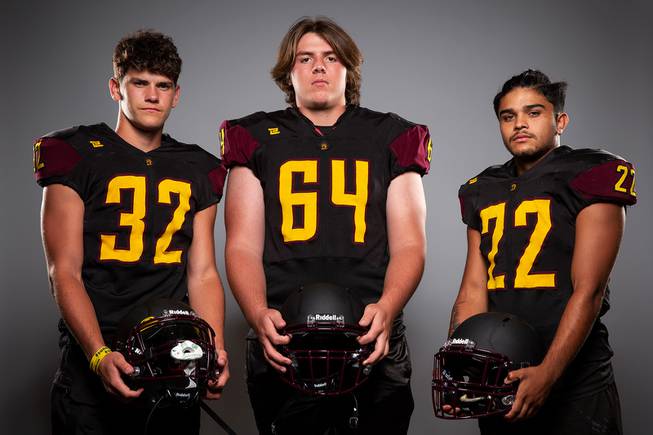 Members of the Pahrump Valley High School football team are pictured during the Las Vegas Sun’s high school football media day at the Red Rock Resort on August 3rd, 2021. They include, from left, Zack Cuellar, Dylan Severt and Jay Amaya.

Hunter Otteson had an interception return for a touchdown on defense and a rushing score on offense tonight for the Pahrump Valley football team in a 40-0 win at Eldorado.

After having its initial two games canceled because of the pandemic and then facing class 3A powers Virgin Valley and Moapa Valley, Pahrump has settled into the season by winning three straight games. The win over Eldorado likely gives it the league title and a first round playoff bye.

“Not only are we peaking, we are playing our best ball of the season,” Pahrump coach Joe Clayton said.

Zack Cuellar had 126 yards rushing and four touchdowns to pace the offense, and Brennen Benedict contributed a rushing score.