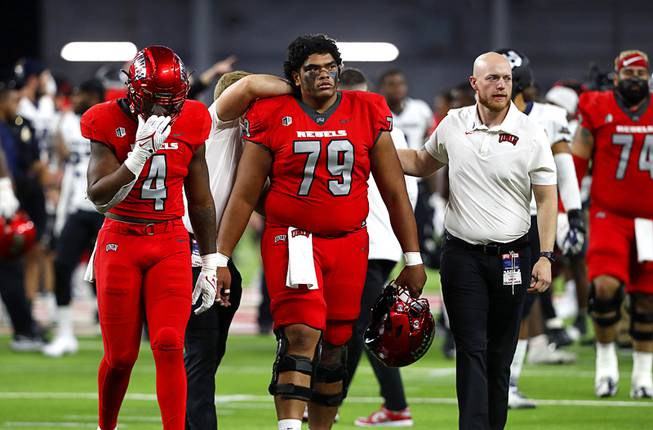 UNLV Rebels leave the field after a 28-24 loss to the Utah State Aggies at Allegiant Stadium Saturday, Oct. 16, 2021.

UNLV dropped to 0-6 with Saturday’s home loss to Utah State, and in a season that is starting to be defined by close defeats, this one may have been the most painful.

So much went right for Marcus Arroyo’s squad. They got off to a fast start, taking a 17-7 lead in the first quarter. The defense made plays, including a couple fourth-down stops to swing momentum. And senior running back Charles Williams had a career night, racking up 221 yards and three touchdowns.

And it wasn’t enough, because four crucial plays went against UNLV.

UNLV took a 17-14 lead into halftime, and the defense had played well to that point (seven of Utah State’s first-half points came on a kickoff return). So when the Aggies found themselves faced with a 3rd-and-16 at the UNLV 24-yard line on the opening drive of the second half, it looked like the scarlet and gray were in the driver’s seat.

Utah State caught the defense by surprise with a draw play, however, and running back Calvin Tyler slipped through the right side for an improbable 18-yard gain. And instead of settling for a field goal—on a night in which their kicker ended up going 0-of-3—the Aggies scored a touchdown on the very next play, as Logan Bonner hooked up with Deven Thompkins for a 6-yard TD.

The difference between three points on that drive (or possibly zero, if the kicker had missed) and seven points ended up making a major impact on the scoreboard.

Williams ran wild against Utah State, setting a career high in yards, but after piling up 212 yards on 22 carries through the first three quarters, the senior workhorse was held to just nine yards on five carries in the final quarter.

The most pivotal of Williams’ carries came on a 3rd-and-3 with 11 minutes on the clock. UNLV was nursing a 24-21 lead at that point, and with the ball in their own territory a first down would have been huge in burning clock and flipping field position. Arroyo called a toss play that had worked earlier in the game, but Utah State sniffed it out the second time around, cutting down Williams for a gain of one yard.

UNLV did not score in the fourth quarter, and after the game Williams didn’t hide how much the loss hurt.

If UNLV has been snakebitten anywhere this season, it has been at the quarterback position. At the midway point of the schedule the scarlet and gray have not had one game in which the starting quarterback made it all the way through to the final whistle, and that trend continued on Saturday, with devastating results.

Friel turned in a workmanlike performance against Utah State, completing 11 of his first 19 passes for 107 yards, and that was fine because Williams was carrying the offense. But with UNLV nursing a 24-21 lead with nine minutes left, Arroyo decided to try to take advantage of Utah State’s over-commitment to the line of scrimmage by calling back-to-back pass plays on first and second down.

Friel’s first pass went incomplete. On 2nd-and-10, Friel appeared to have an open receiver directly in front of him for a first down at midfield, but he scrambled out of the pocket and was tackled from behind as he forced a pass into traffic. The throw was intercepted, and more damaging was the fact that Friel came up limping after the play. The freshman had to be helped off the field and did not return.

With Friel out for the game, UNLV had to turn to third-stringer Justin Rogers when they got the ball back, still leading 24-21 with four minutes to play. The offense went 3-and-out on that possession, setting up Utah State’s go-ahead drive in the final minute.

If Friel hadn’t gotten injured, the outcome might have been very different for UNLV.

Arroyo conceded that changing quarterbacks at such a crucial point in the game messed with the flow of the offense.

“It was hard to get [Rogers] into a rhythm and think what we could do,” Arroyo said. “It’s unfortunate. It sucks losing a quarterback, but next guy’s up. We’ve got to make it work.”

Utah State converts when it counts

The UNLV defense had a really good day. Through the first 58 minutes they had allowed just 14 points (again, the special teams unit was responsible for seven), and they came through twice in especially big spots.

Early in the second quarter, the Aggies had a 4th-and-goal from the UNLV 1. Bonner fumbled the snap and was swallowed up by the UNLV defense as he tried to scoop the ball and advance it. On USU’s next drive, they went for it on 4th-and-2 from the UNLV 33 and got stuffed by Jacoby Windmon, who tackled Carson Terrell for a 1-yard gain on a swing pass. UNLV celebrated both plays, and rightly so—they took seven, possibly even 10 or 14 points off the board for Utah State.

Utah State handed to Elelyon Noa, and Noa pounded through the middle of the line for two yards to keep the chains moving. Bonner hit a couple passes to move inside the red zone, and with 35 seconds left Noa scurried in for an 11-yard touchdown to give Utah State a 28-24 lead.

The UNLV defense had recorded stops on Utah State’s previous three possessions before Noa picked up that fourth down, which somehow only made the final score hurt more.

Arroyo summed up his team’s mood after coming up short in another winnable game.

“The expectations we have right now are really high,” Arroyo said. “I’m heartbroken, mad, humbled, pissed. All the stuff that we’re all feeling in that locker room right now is really rough.”

Live coverage: Raiders get back on track by cruising to victory in Denver