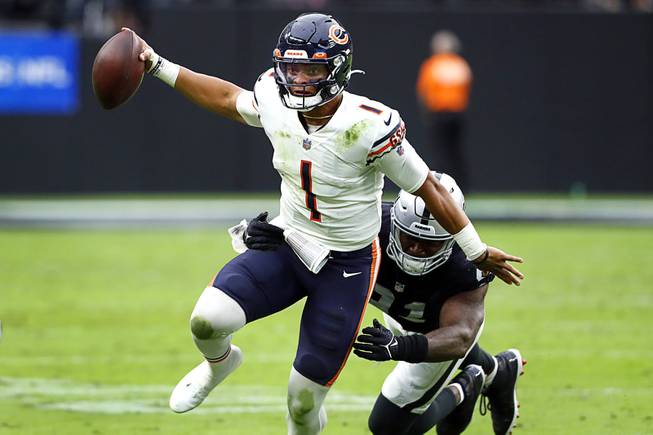 For the second straight week but also the final time of the season, a 14-hour marathon of NFL games awaits.

The league’s decision to schedule this year’s pair of London games around the local time overseas has been a popular decision for those starving for betting action all day long. The Miami Dolphins and Jacksonville Jaguars will have the main screen in sports around town all to themselves at 6:30 a.m. Pacific time when they kick off at Tottenham Hotspur Stadium.

For those wanting a bet who don’t see one on the side, let’s go with a bonus prop to start off this week’s Sunday Sweats. I’ll take Dolphins receiver Jaylen Waddle to go over 4.5 receptions at Even money at BetMGM.

The rookie has a great rapport with returning quarterback Tua Tagovailoa, and coach Brian Flores hasn’t hidden his desire to build the offense around the pair of Alabama products. I’ll have another prop bet in tomorrow’s Raiders’ preview story that will be tracked here as well as one below as part of the usual five categories.

I’m hoping the trio of plays can help turn around a section that’s been an anchor for the bottom line while the rest of the column excels.

Cleveland Browns defensive end Myles Garrett (95) runs off of the line of scrimmage during an NFL football game against the Pittsburgh Steelers in Cleveland, in this Sunday, Jan. 3, 2021, file photo. Garrett was selected Friday, Jan. 8, 2021, to The Associated Press All-Pro Team.

This total has shot down, but it may not have shot down enough. If the weather forecast remains unchanged, it’s going to shoot down more. Meteorologists have called for up to 30 mile-per-hour winds off of Lake Eerie at FirstEnergy Stadium all week, a trustworthy and annual deterrent of offense in Cleveland. Both these teams have been even better defensively than they’ve been offensively anyway. Some of the biggest money might be waiting to come in for confirmation of the weather conditions, but unless you’re playing at the limits, there’s no time to wait. Now is the time to act and make a slight risk for a potentially large amount of value.

Speaking of lines that may move, the Chiefs should close as at least a 7-point favorite in Washington. Late steam came in on Kansas City the last time it took on an overmatched opponent, Philadelphia, and a repeat is likely. Much of the concern on the Chiefs is overblown and a product of a rough schedule to start the season. I’m not certain which way the odds will trend in Minnesota at Carolina considering I never thought the road team would move to be favored by this much to begin with. But, now that they have, I’m happy to take advantage with a teaser that moves through both the 3 and the 7. The Panthers may not beat the Vikings outright, but they shouldn’t lose by more than a touchdown.

Do I expect Chicago to upset Green Bay? No. Do I think it has a better than a 33 percent chance? Absolutely. That’s why the Bears +210 to win outright — only +208 at Circa — is among my favorite moneyline plays on the board. I’ve hit this category in two straight weeks by tying together a favorite and an underdog where I show value, so the formula will remain. The hype on the Chargers has gone too far, as they should be a bigger underdog on the road to what’s been one of the NFL’s best teams over the last three seasons. Baltimore -140 is significant value. I expect the Ravens to win, and hope the Bears eke one out for a big payday.

This bet is correlated to the last, because if the Bears hope to beat the Packers, they should lean more heavily on the running ability of their rookie quarterback. And why would they not? Green Bay is 29th in the NFL in rush defense by Football Outsiders’ DVOA ratings. That’s worse than each of the teams Fields faced in his first two starts, the Lions and the Raiders, where the Bears mostly led throughout. That meant offensive coordinator Bill Lazor could keep things vanilla and not open up the whole playbook. I doubt he follows the same pattern here in an important divisional game. Chicago should have a big advantage in Fields’ legs, and it’d be foolish not to utilize them.

If it’s a track that utilizes the 550-horsepower package, as Texas Motor Speedway will for this weekend’s playoff race, then I’m finding a way to back the young Hendrick Motorsports driver. I’ve done it several times in this space, and there’s nothing to stop me from doing it again. This line doesn’t make any sense. Keselowski is still in the playoffs while Bryon is out, which is possibly why he’s the favorite in this matchup. But the non-playoff drivers don’t really start ceding to those in contention until the final round of four. This is the first race of 8-driver round, and Byron should still be hungry to win. He’s been one of the best drivers in this package all year with results that blow away those by Keselowski, who’s on his way out from Team Penske and has put up subpar results for months now. Keselowski barely slipped into the final eight as the last driver to advance, and that’s not a good enough reason for him to favored against a 550-horsepower specialist.