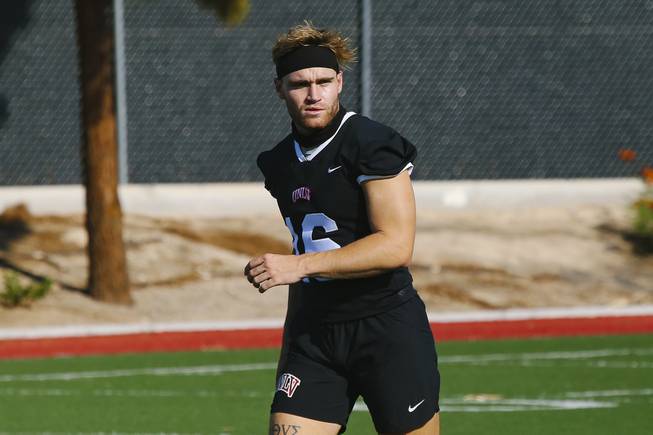 More uncertainty at quarterback for UNLV on short week

As it has been just about every week of the 2021 season, the biggest storyline for UNLV football coming off Saturday’s loss to Utah State is the health of its quarterbacks.

At his Monday morning press conference, head coach Marcus Arroyo sounded a cautious tone. Presumptive starter Doug Brumfield, who has missed the past two games with a back injury, is still day to day. That makes him unlikely to suit up on a short week as UNLV prepares to host San Jose State on Thursday.

True freshman Cameron Friel, who has emerged as a playable option in Brumfield’s absence (61.6%, 619 yards, one touchdown, four interceptions), had to leave in the fourth quarter against Utah State after suffering a knee injury.

Arroyo said he was still sore two days later and would be limited in practice this week.

“Cam is doing OK,” Arroyo said. “He’s a good example of why we need some extra time for recovery. He fell on that brace pretty hard. He’s got a knee. I think he’ll be limited we go, but he’s tough…We’re hoping to get him back for sure.”

That leaves UNLV in a precarious position with kickoff just two days away. The depth chart beyond Brumfield and Friel is a complete toss-up at this point in the season, and Arroyo would be faced with a difficult choice if neither of the top two options are available.

When Friel exited on Saturday, it was junior Justin Rogers who got the call in relief. Rogers opened the season as UNLV’s Week 1 starting quarterback but was quickly benched for Brumfield. Rogers takes an extraordinary amount of sacks (he was sacked once in four drop backs against Utah State) but after the game Arroyo said he went with Rogers because he has a better grasp of the playbook than No. 4 QB Tate Martell.

Martell, of course, is the former Bishop Gorman star who transferred to UNLV in the offseason. Injuries have plagued him since training camp, but Arroyo said he’s finally back to 100%. Arroyo installed a small package of plays for Martell against Utah State but only called one of them; Martell kept the ball and rushed for no gain.

With Martell fully healthy, he and Rogers figure to take just about all the snaps in practice this week. Though it’s a short week the additional reps should help immerse Martell in the offense, and given Rogers’ play this year (10-of-20 passing, 40 yards, one touchdown, one interception), could Thursday’s game be a situation where Martell sees his first extended action in a UNLV uniform?

The good news is that quarterback uncertainty is nothing new to the scarlet and gray, who have yet to have a passer play an entire game this season.

Arroyo credited his group of QBs for their preparedness and said he expects each of them to be ready when their name is called.

“Having to prepare multiple guys is always hard,” Arroyo said. “They’re working hard at that. It’s unfortunate but it is what it is. Life’s not fair that way. You’ve just got to work through it and try to get as prepared as you can.”