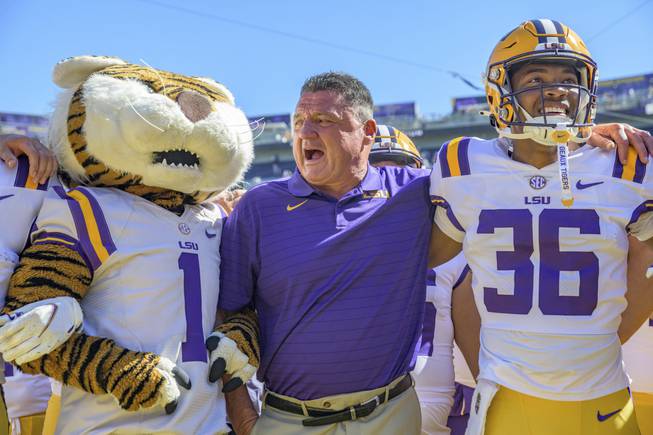 College football by the odds: Vegas preview and picks of every Week 8 game

No matter the odds, no college football parlay from last weekend could have been more improbable than LSU coach Ed Orgeron’s stretch from Saturday afternoon to Sunday morning.

“Coach O” hit the unprecedented combination of pulling off the biggest power-five conference upset of the week and then getting fired the next day. Oregon’s Tigers knocked off Florida 49-42 as 12.5-point underdogs — making the victory a hair more unlikely than Purdue’s 24-7 win over Iowa as the Boilermakers closed at +11.5.

Less than 24 hours later, the university announced that the two sides were amicably parting ways at the end of the season with the coach set to receive his full buyout of nearly $17 million. Orgeron’s six-year run in his dream job has been an unmitigated success, and not just because he won the 2019-20 College Football Playoff.

There’s a consensus that the rest of his tenure has been a letdown, but that’s not the case from a betting perspective. Orgeron has gone a highly profitable 39-26-1 against the spread as Tigers coach since taking over on an interim basis from Les Miles in 2016.

LSU is only 3-4 against the number this season, but if it winds up with a losing season by sports books’ standards, it would be the first under Orgeron’s watch. I haven’t really taken advantage as it feels like I’ve picked against LSU in the majority of those games, including last week when Florida contributed to a mediocre 23-27 record (6-5 on plays, 8-10 on leans and 9-12 on guesses) picking every game against the spread.

Read below for picks on every Week 7 game, with write-ups on the biggest contests and some of the strongest positions. Lines are the best currently available in Las Vegas on the chosen side. Picks are labeled in three separate confidence categories.

Oregon +2.5 at UCLA, over/under: 55.5. The Ducks’ talent level dwarfs every other team in the Pac-12, including UCLA, and they’ve started to channel it the last couple of weeks. Oregon played much better than the final scores in a 24-17 win over California and 31-24 loss to Stanford indicate and are likely inching toward a breakout. Lean: Oregon +2.5.

LSU +10 at Ole Miss, over/under: 75.5. Orgeron might be right when he calls Heisman favorite Matt Corral’s questionable status going into this game a “smokescreen,” but that’s no guarantee. But it’s also believable that Corral is significantly beaten-up given the number of hits he took in Ole Miss’ 31-26 victory at Tennessee as 1.5-point favorites. If there’s an even small possibility he misses this game, then the number is too high. Guess: LSU +10.

Oklahoma State +6.5 at Iowa State, over/under: 47. Iowa’s escape act ended last week with a loss to Purdue, leaving Oklahoma State as the most fraudulent undefeated team. The Cowboys have arguably been outplayed in half of their wins but keep eking out close victories — a formula that’s not going to work against the best team they’ve faced so far this season. Play: Iowa State -6.5.

Clemson +3.5 at Pittsburgh, over/under: 46.5. Pittsburgh quarterback Kenny Pickett has been outstanding and deserves more attention than he’s gotten, though his strength of schedule leaves much to be desired. Clemson’s defense is better than a hypothetical All-Star team of the first six opponents Pittsburgh has played, and as bad as the Tigers’ offense has played, this line has moved too much in the Panthers’ direction. Lean: Clemson +3.5.

Tennessee +27 at Alabama, over/under: 67.5. Tennessee outgained Ole Miss by nearly 1 yard per play in the aforementioned loss last week and continues to perform like a top 25 team that nobody notices. Some drop-off is merited if quarterback Hendon Hooker can’t go to force inaccurate Joe Milton to fill in, but not this much as the Volunteers shaped up more like a 21-point underdog here just a week ago. Lean: Tennessee +27.

Ohio State -19 at Indiana, over/under: 60.5. Ohio State’s offense has been the most explosive in the nation since the start of Big Ten play, and it’s not all that close.The schedule continues to conspire against Indiana, which is better than its 2-4 record but finds itself in a sacrificial-offering role here with Ohio State coming off a bye. Guess: Ohio State -19.

Boston College +6.5 at Louisville, over/under: 56.5. The Cardinals have one of the worst Power Five conference defenses, which makes it hard for them to pull away from anyone. Boston College bottomed out in a 33-7 loss to NC State as 3-point underdogs last week, but might be in a buy-low spot as it’s been solid the rest of the year. Play: Boston College +6.5.

San Diego State +4 at Air Force, over/under: 40. Air Force is getting too much credit for the optics of winning at Boise State 24-17 a week ago considering this is not a vintage Broncos team this year. San Diego State is in many ways a better version of Air Force — a defensively driven, ball-control team. Play: San Diego State +4.

UNR +3 at Fresno State, over/under: 62.5. This line was so far off from my number — Fresno State -6.5 — that I wondered if I had missed an injury or something. The Bulldogs have been more efficient on both sides of the ball and have a pair of performances — a win over UCLA and a narrow loss to Oregon — that hover above anything the Wolf Pack have done. Play: Fresno State -3.

New Mexico State +18.5 at Hawaii, over/under: 60. The market boosted the Aggies too much off a backdoor cover at UNR where the Wolf Pack beat them much worse than the 55-28 final score indicated. New Mexico State is the worst team in the nation by SP+ ratings and isn’t set up for success in its first trip to the islands in 10 years. Play: Hawaii -18.