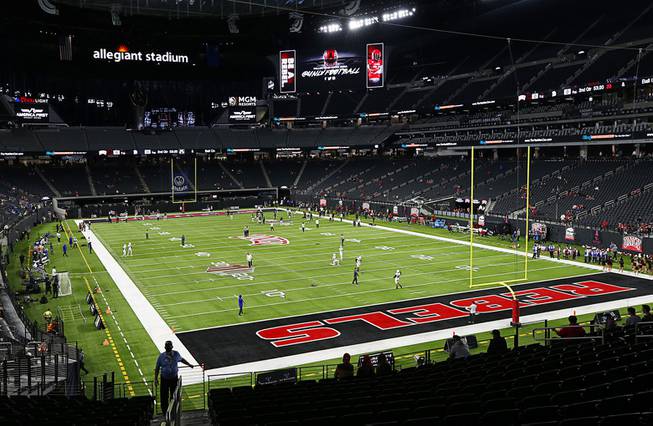 Players warm up before an NCAA college football game between the UNLV Rebels and the San Jose State Spartans at Allegiant Stadium Thursday, Oct. 21, 2021.

We’re still about 30 minutes from kickoff, but UNLV has already gotten some good news at it appears freshman Cameron Friel will be able to start at quarterback tonight against San Jose State.

Friel, who has started UNLV’s last two games in Doug Brumfield’s absence, had to be helped off the field late in Saturday’s loss to Utah State. He was able to practice in limited fashion this week, and now he’s on the field going through warmups, a strong indication that he’ll be the man tonight.

Quarterback consistency has been a huge issue for UNLV this season. Through six games, the scarlet and gray have yet to have one of their QBs last through an entire contest.

Could Tate Martell get the call vs. San Jose State?

The first half of the 2021 season did not go according to plan for UNLV football, as the team finds itself winless (0-6 overall, 0-2 Mountain West) despite playing four games down to the wire, including last week’s crushing loss to Utah State.

UNLV wasn’t able to capitalize on any of its winnable opportunities in the first half, but if the scarlet and gray have learned anything from their close losses perhaps those lessons can be applied tonight, when they host San Jose State (3-4, 1-2 MWC) in a contest that figures to be another tight one.

Could this be the week for Tate Martell?

UNLV’s quarterback situation is dire. Junior Doug Brumfield is out with a back injury and freshman Cameron Friel got knocked out of Saturday’s game with a leg injury. Junior Justin Rogers hasn’t shown much in his four appearances this season. So while Martell may not have a full grasp of the playbook after transferring in late in the offseason, head coach Marcus Arroyo may have no choice but to put the ball in Martell’s hands.

And based on the matchup, UNLV is probably going to have to ask its quarterback to make plays tonight. Running back Charles Williams is coming off a career game (221 yards, three touchdowns vs. Utah State), but it would be tough to ask him to handle 27 touches again just five days later. And San Jose State has the 31st-ranked run defense in the country (3.6 yards per carry allowed). Odds are, UNLV is going to have to sling it at some point tonight.

Martell has only attempted six passes this season (2-of-6, 27 yards). Rogers has attempted 20 (10-of-20, 43 yards). If those are the options, Arroyo is going to have to somehow devise a plan to make it work.

UNLV sports one of the very worst pass defenses in the country, as opposing quarterbacks have posted a rating of 171.1 against the scarlet and gray this season — the eighth-worst mark among FCS teams. But the beleaguered secondary should be competitive tonight.

San Jose State lost its starting quarterback Nick Starkel to an arm injury a month ago, and the Spartans’ passing game has seriously sputtered since then. They’ve scored just 14.7 points in three Mountain West games, and the aerial attack is non-competitive with backup Nick Nash at the helm; he hasn’t completed more than 50% of his passes in either of the last two weeks (both losses).

It was a rough first half of the season for UNLV’s defensive backs, but as it so happens, this could be a case of catching the right opponent at the right time.

If any UNLV defender is going to make a big play tonight, odds are it’s going to be junior linebacker Jacoby Windmon. His transition from edge rusher to inside linebacker has gone smoothly this season, and Windmon is coming off perhaps his best game as a collegian.

Against Utah State last week, Windmon made seven solo tackles and racked up 4.0 tackles behind the line of scrimmage. For the season he now has 6.5 tackles for loss, the best mark among UNLV players. He has taken over the defense to the point where he is involved in just about every play.

With San Jose State likely to focus on running the ball, look for Windmon to make his presence felt early and often.