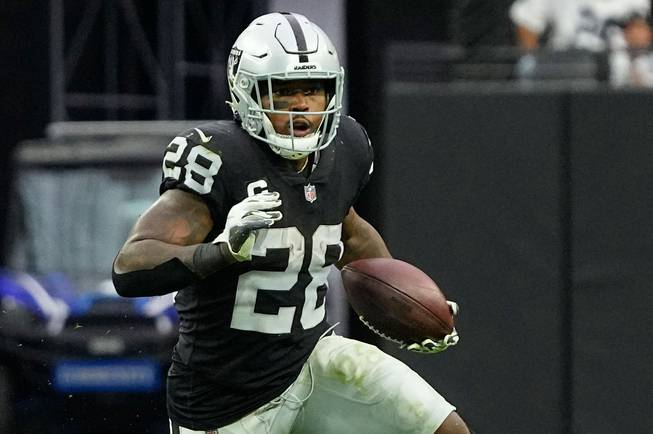 Raiders running back Josh Jacobs carries the ball against the Bears during the second half of the teams’ October 10 game at Allegiant Stadium.

The Raiders “got after each other,” in running back Josh Jacobs’ words, in a fully padded, highly intense practice on Wednesday to start preparations for Sunday’s Week 7 game against the Eagles.

The session was so physical, and Jacobs moved so fast, that he was surprised afterwards that he didn’t experience any ill effects or soreness.

“This is the second week,” Jacobs said. “I haven’t been two weeks in a row since I’ve been in the league where I came out of games with nothing like no scratches, no nothing. This is the first time I’ve felt good.”

That positivity extends to the entire Raiders’ run game. Las Vegas has struggled on the ground all season, ranking last in the NFL at 3.3 yards per rush attempt, but believes it turned a corner in a 34-24 victory at Denver last week.

The Raiders’ total of 82 yards on 23 carries was still modest, but it was their second-highest total of the year. Jacobs said running lanes felt noticeably wider.

Much of the success came because of improved play along the offensive line. The Raiders changed things up front two weeks ago by moving rookie Alex Leatherwood from right tackle to right guard and sliding tackle Brandon Parker into the starting lineup.

The switches didn’t make much of a difference in a loss to the Bears, but seemed to pay off against the Broncos. Jacobs was able to grind out first downs in short-yardage situations, and Kenyan Drake registered the second-longest rush by a Raider running back this season with an 18-yard touchdown.

No one was happier on the sideline for Drake’s breakout than Jacobs.

Jacobs ranked third in the league with 273 carries a year ago, and 13th with 254 carries in 2019, but those workhorse days might be behind him. They also may have contributed to wearing him down going into this season as Jacobs was on the injury report for the first five weeks with ankle and toe ailments that forced him to miss a pair of games.

Recent free-agent signing Peyton Barber did well in Jacobs’ place, especially during a 111-yard rushing performance against the Dolphins, but the Raiders now have their full complement of running backs healthy.

In addition to Drake breaking out last week, veteran Jalen Richard came off injured reserve before the Bears game and has caught a pass in each of the last two contests.

“For every player, we develop a package for them that will accentuate their strengths and have a chance for them to get the ball and do what they do best,” offensive coordinator Greg Olson said.

Olson wasn’t ready to join in on the optimism for the running attack out of one game, noting he’s still “not happy with where it’s at.” But, with Las Vegas dismantling its offensive line in the offseason and then suffering injuries to both starting guards, improvement was bound to be a long process.

Jacobs mentioned after the Bears game that he would watch film and feel helpless, like there was nowhere for him to run. One week later, he came away a lot more encouraged after rewatching the Broncos win.

“We’re finally getting a lot of guys who are getting a lot of movement,” Jacobs said. “There were a couple plays where we weren’t getting touched for five yards, things like that. It was definitely a step in the right direction.”