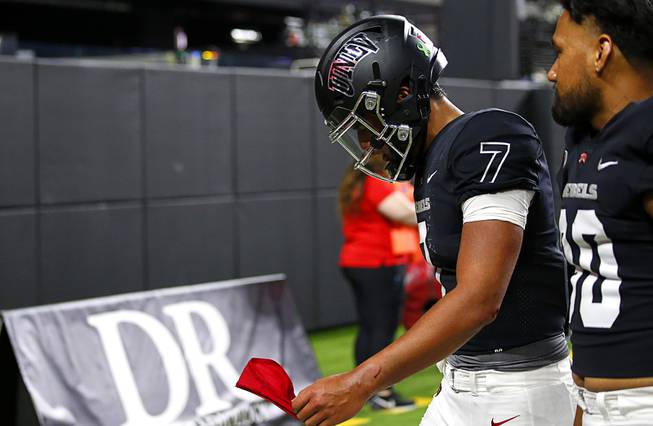 There’s no way to make sense of the way UNLV fumbled with 16 seconds left in the first half, leading to a SJSU touchdown with two seconds remaining. There’s no precedent for a potential game-tying drive to start with more than seven minutes on the clock and still run out of time. There’s simply no way to explain how UNLV could give away a two-touchdown lead to such a bad team.

It was, truly, inexplicable, even for a program that is now 0-7 on the season and riding a 13-game losing streak.

UNLV has now lost four consecutive games by a single possession, and there’s no question that this one hurt the most.

After the game, which ended with UNLV 11 yards away from a tying touchdown, head coach Marcus Arroyo seemed to be weighed down by all the achingly close defeats.

“I think that our guys are down about not making those plays,” Arroyo said. “I know we are. I know we’re crushed, to be candid.”

San Jose State spent most of this game trying to hand UNLV its first victory since the 2019 season. It started on the opening kickoff as SJSU fumbled the return, allowing UNLV to take possession deep in Spartans territory. Four plays later, quarterback Cameron Friel hit Steve Jenkins in the back of the end zone for a 6-yard touchdown.

UNLV extended its lead to 17-3 midway through the second quarter after SJSU quarterback Nick Nash fumbled at his own 18-yard line. Cornerback Bryce Jackson recovered for the scarlet and gray, setting up Charles Williams for a 1-yard touchdown run with 5:51 left in the half. At that point the game appeared to be unlosable for UNLV.

San Jose State showed a faint pulse by driving for a field goal with 1:07 on the clock to make it 17-6, and that’s when things truly unraveled for the home team.

After a touchback, UNLV handed off to Williams twice for 12 yards, clearly attempting to run out the final seconds of the half. But with 16 seconds left, Williams had the ball poked out of his arms and SJSU recovered at the UNLV 37-yard line. The next play was a deep heave by Nash, and Spartans tight end Derrick Deese outjumped a number of UNLV defenders to make the catch at the 1.

Tyler Nevens then scored a rushing touchdown with two measly seconds remaining to cut UNLV’s lead to 17-13 at the half.

Arroyo’s explanation for handing off and not kneeling on the ball was that he harbored hope Williams would break a run, allowing the offense some breathing room to open up the attack and go for a field goal before the buzzer.

“Uncharacteristic of Charles,” Arroyo said. “That’s our breadwinner. We hand him the ball and move the ball and see if we can get something going close enough to where we can try to possibly take some shots and get into field goal range. Uncharacteristic.”

Arroyo was faced with another huge decision on a 4th-and-1 with the score tied 20-20 and nine minutes left in the fourth quarter. With the ball at the SJSU 23, Arroyo opted not to go for it, trusting his kicker and his defense to make three points hold up the rest of the way.

The kick was blocked, and the defense then allowed a 78-yard touchdown drive in just over two minutes.

Isaiah Holiness broke a 54-yard run to move the Spartans across midfield, and Nash finished it off with a 15-yard scramble to put San Jose State ahead, 27-20, with 7:14 to play.

An illegal block on the ensuing kick return forced UNLV to begin its potential game-tying drive from the 9-yard line. They’d have to go a long way, but with more than seven minutes on the clock and three timeouts at their disposal it hardly seemed consequential.

Eighteen plays and three timeouts later, Friel took a shotgun snap from the SJSU 11-yard line with 14 seconds left. San Jose State linebacker Kyle Harmon blitzed off the edge and slammed Friel to the turf before the freshman could even finish his dropback. The rest of the offensive players tried to line up for one final play, but time expired before they could get off another snap.

It was a confusing finish to a game that UNLV should have won several times over.

“Down by seven, that close to the end zone, I thought we had a great shot,” linebacker Austin Ajiake said. “It’s frustrating losing these close games. At the end of the day, we’ve got to find a way to finish.”

Friel completed 20-of-28 passes for 240 yards and one touchdown. Kyle Williams caught seven passes for 117 yards. Charles Williams posted 94 yards and a score on 24 attempts. It all should have added up to that elusive first win, but somehow it didn’t.

UNLV, which has lost its last four games by a combined 26 points, will head to Reno next week to take on in-state rival UNR.