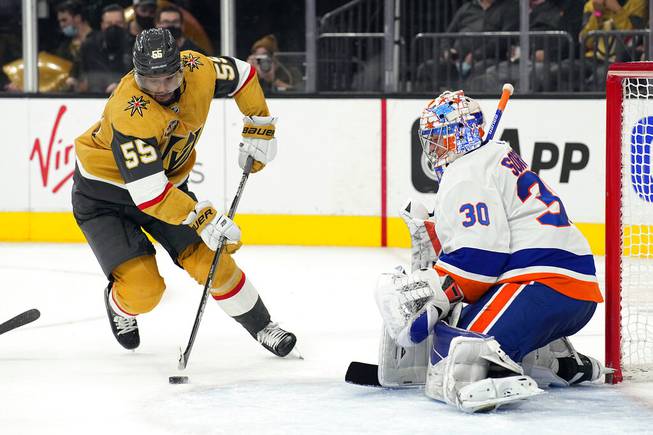 The chant of “Let’s Go Islanders” rang out in the closing minutes of Sunday’s game, a rarity for T-Mobile Arena as the spattering of empty gray seats revealed just how many Golden Knights fans had already walked out the doors.

The Golden Knights are navigating mostly uncharted territory after their 2-0 loss to the Islanders to the point that William Karlsson said following the game that he wasn’t aware that they’ve started a season before with the same 1-4-0 record.

Losing streaks aren’t common with this team, which magnifies the current four-game skid that ties a franchise-worst.

“It sucks losing. No one likes it,” goalie Robin Lehner said. “But you know what, it’s a bit of adversity that this team hasn’t gone through yet, and good teams, they dig themselves out.”

Twice in team history has Vegas lost five in a row, though both of those occasions included an overtime loss that garnered the Golden Knights a standings point. They’ve never gone pointless in four straight under coach Pete DeBoer, and the last time they did resulted in the firing of Gerard Gallant in the middle of the 2019-20 season.

As bad as the record is right now — and it matches the team’s worst start in 2018-19 — things aren’t quite that bleak. The Golden Knights had a stinker last week against the Los Angeles Kings, but each of the three losses since have been closer contests.

They were tied in the third period against both the Blues and Oilers, and spent most of Sunday trailing by the goal the Islanders’ Josh Bailey scored 2:16 into the game.

It’s one thing if they were losing 6-2 every night like they did against the Kings. But they’ve lost the last three games by a total of four non-empty-net goals, which shows they’re closer to turning the corner than the record would suggest.

“It’s definitely encouraging because today we had a lot of good chances and it would have felt even worse to sit here and have a horrible game kind of like that LA game,” Karlsson said. “I’m liking where we’re going. We’ve just got to get that win. Hopefully we score some goals, we get that win and we start rolling.”

It’s true they aren’t scoring, and that’s a problem.

Since the four-goal outing in the season-opening win, Vegas has managed six goals during the four-game losing streak, and three of them came in one game.

That’s a common refrain for when the team struggles. Think back to the last two playoff exits, when scoring droughts booted the Golden Knights from the league semifinals.

It’s also true that the Golden Knights are without six regulars in the lineup, a list that now includes forward Nolan Patrick who was a late scratch with an upper-body injury and is listed as day-to-day. That’s in addition to Mark Stone, Max Pacioretty, Alex Tuch, Alec Martinez and Zach Whitecloud, who combined for 74 of the team’s 191 goals last season (39%). Of course every team goes through injuries and the team won’t use it as an excuse, but you can see why the scoring has dried up.

And Sunday’s lack of goals wasn’t for a lack of chances. Vegas had a season-high 79 shot attempts (42 on goal) against the Islanders, making for season-bests in scoring chances (34), high-danger chances (17) and expected goals (3.97), according to the analytics site Natural Stat Trick.

The issue was the man in net. Ilya Sorokin is regarded as one of the top young goalies in the league, and fresh off a shutout last night in Arizona kept the momentum rolling. He made all the routine saves, but also padded his personal highlight reel at the expense of Vegas forward Keegan Kolesar, who he robbed twice with the left pad.

But the “hot goalie” justification only goes so far. While there’s some truth to it, there’s also the thought that if you get 42 shots on goal like the Golden Knights did, some of them should end in the net. They are missing their best finishers in Pacioretty and Stone, but too often a shot ended up in Sorokin’s chest for an easy save.

The Golden Knights have recorded at least 130 shots the last three games, and have just the four goals to show for it — a shooting percentage of 3.1%.

“Offensively I though both those nights (the last two games) I we created enough looks to score some goals,” DeBoer said. “Did we hit really hot goalies both nights? Is that what happened, or did we make them look good, or is it a combination of those two things? I think it’s probably a combination.”

Another night, another step in the right direction. The defensive issues that plagued the team in the first few games have improved, while the offense is back to controlling the puck like it does when the team is really humming.

The Golden Knights have led teams in a lot of key stats the past few games. They’re just waiting for the score to reflect it.

“We’re in the winning business,” DeBoer said. “It’s not training camp. While those things are great, we still have to find a way to win games. That’s where we’re at.”

Back-to-back wins have seen Raiders rise up, not melt down, in face of adversity

Analysis: Raiders turn in most complete performance in win over Eagles