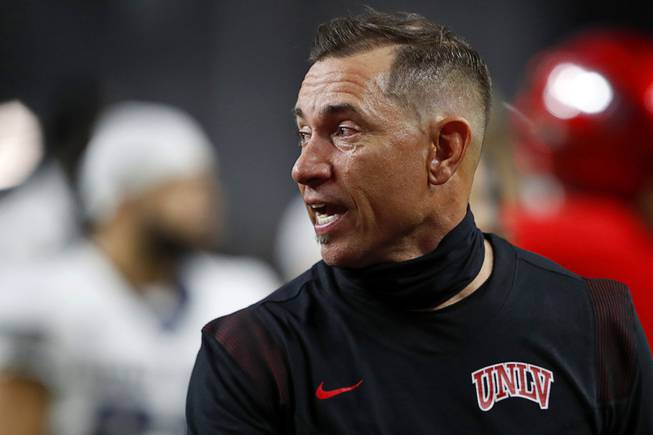 With Fremont Cannon on the line, it’s a ‘big week’ for UNLV football

Played amid the pandemic, UNLV hosted in-state rival UNR in an empty Allegiant Stadium on Oct. 31, the second contest on the schedule for both teams. It was the first time the scarlet and gray had taken the field at their new home and just their second game under new head coach Marcus Arroyo, and the result was a blowout win for UNR, 37-19.

Almost exactly a year later, the cannon will be on the line again Friday when UNLV travels to Reno under slightly different circumstances.

One thing that hasn’t changed since then? UNLV’s win total. The scarlet and gray have lost all 11 games since then, running up an 0-13 record under Arroyo. One thing that has changed? UNLV’s program-wide understanding of the rivalry.

It starts with Arroyo, who in his Monday afternoon news conference acknowledged that the 2020 edition of the rivalry was missing something.

There figures to be an actual fan presence on Friday, which should help this meeting feel more like a real rivalry game. The last time the teams played in Reno, the announced attendance was 16,683; a similar turnout on Friday would be much preferred to the 2,000 socially distanced spectators who were allowed in cavernous Allegiant last year.

And rather than being intimidated by the crowd, UNLV can actually draw on some positive experience: The program’s last win came in Reno, when the scarlet and gray went north for the 2019 season finale and came home with the cannon via a 33-30 overtime victory.

Running back Charles Williams has fond memories of that game, as he had an 80-yard touchdown run and finished with 138 yards, so the sixth-year senior can tell his teammates all about what it takes to win in Reno.

Although for Williams, it’s something of a personal rivalry, too.

He didn’t know much about the rivalry before he got to UNLV, but he knew he didn’t like UNR. The Wolf Pack recruited him in high school, but much like his hometown Fresno State, never offered him a scholarship.

“I didn’t know too much about it,” Williams said of the Battle Born rivalry. “It was kind of funny; Reno, they came to my school and I met the former head coach, Brian Polian, so it was kind of weird how they came up there and they acted like they were going to offer me. We had a camp at my school and everything, still didn’t offer me. So I kind of treated it like Fresno — it was a slap in the face. It’s a great program, a great school and all, but I just felt disrespected because they were showing a lot of love but they never pulled the trigger.”

On the field, UNLV will have its work cut out against a solid UNR team that is currently 5-2 and appears headed to a bowl game for the fourth straight season. But emotionally, the scarlet and gray expect to match their intensity.

Arroyo said his team is invested in the rivalry and painting the cannon red.

“I know well enough what this is about,” Arroyo said. “It’s been going on for a long time. This is the best trophy in college football in my opinion. It’s a big week, man.”

Back-to-back wins have seen Raiders rise up, not melt down, in face of adversity