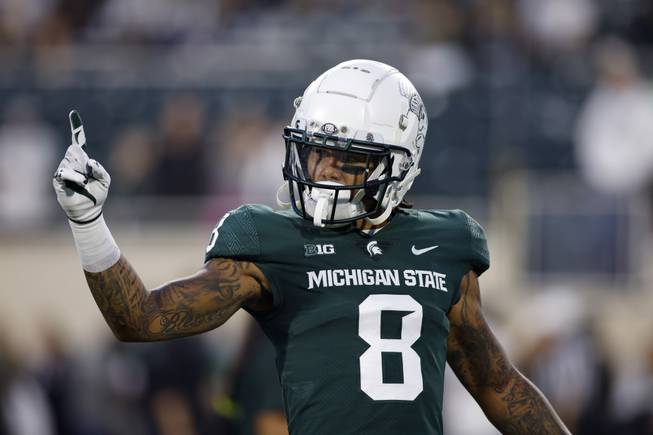 College football by the odds: Vegas preview and picks of every Week 9 game

The Big Ten so far has felt like a particularly slow-developing Game of Thrones season.

The powers that be have been marching past overmatched opponents but mostly haven’t encountered each other. But winter, or in this case, unavoidable confrontation, is coming and it’s starting this weekend.

The six Big Ten teams the betting market has rated as the best for most of the season — Ohio State, Michigan, Penn State, Wisconsin and Iowa — are all playing each other. The conference championship picture is guaranteed to gain some long-awaited clarity.

The Big Ten sits with the SEC as the only conferences all but guaranteed to get at least one team in the College Football Playoff. The former league hasn’t quite had the consistency of latter in recent years in terms of quality, but when it’s been good, it’s been really good and this looks like one of those years.

Nine teams are currently priced as legitimate contenders to make the College Football Playoff at less than 100-to-1 in the futures to win the title at Westgate Las Vegas SuperBook. The Big Ten is the only conference with three representatives in the group — Ohio State (6-1), Michigan (40-1) and Iowa (60-1).

That’s partly because the biggest battles haven’t happened yet, but they won’t be long now. I’ll break down and pick all three aforementioned games from a betting perspective below, as well as the rest of the Week 9 college football schedule.

Read below for picks on every game. Lines are the best available at publication time in Las Vegas on the chosen side. Picks are labeled with three separate confidence categories.

Michigan -4.5 at Michigan State, over/under: 50.5. Michigan State’s schedule has been significantly easier than Michigan’s — the former’s ranks No. 102 in the nation by the FEI ratings while the latter’s is No. 69 — and yet all of the Spartans’ advanced numbers pale in comparison to their rival’s. Michigan should win, but the spread has climbed after opening as low as -3 and now might be priced too steeply in what should be a low-scoring game. Guess: Michigan -4.5.

Iowa +3 at Wisconsin, over/under: 36.5. Iowa has a coaching edge here, as Kirk Ferentz has consistently gotten the most out of his players the last few years in stark contrast to Wisconsin’s Paul Chryst, but perhaps no other advantages. The Badgers have a higher talent index and much more efficient offense and defense on a per-play basis. Lean: Wisconsin -3.

Texas +2.5 at Baylor. Both offenses are capable of producing at a high clip, but Texas’ defense has been a liability all season. Baylor’s defense has no such limitations, and an athletic, hybrid defensive back/linebacker like Jalen Pitre is exactly the type of player needed to slow Texas stars like Bijan Robinson and Casey Thompson from getting into open space. Lean: Baylor -2.5

Georgia -14.5 vs. Florida in Jacksonville, over/under: 51. The Gators are third in the nation against Football Bowl Subdivision opponents in gaining 7 yards per play — somehow an entire yard better than anyone Georgia has played this season. The Bulldogs have gotten healthier since the start of the season, but still have a lengthy injury list as opposed to the Gators, which will reportedly come out of the bye week with a cleaner sheet. Play: Florida +14.5

Ole Miss +2.5. at Auburn. These teams project pretty evenly before factoring in the situation, one that’s strongly in the home team’s favor. The Rebels are playing a grueling, fifth-straight SEC game while the Tigers are coming out of a bye. Play: Auburn -2.5.

Penn State +18.5 at Ohio State. Reports are that Penn State came out of last week’s nine-overtime loss to Illinois relatively unscathed and that many of the lingering injuries to their best players, most notably quarterback Sean Clifford, worsened. If that’s true, then this number is a few points too high for a team that’s at full strength and ready to throw everything at a last-ditch effort to get back in the conference race. Guess: Penn State +18.5.

Purdue +7 at Nebraska, over/under 52.5: Nebraska is extremely unlucky to have lost five games, with all of the defeats coming by a touchdown or less. Purdue is nowhere close to the home team in terms of efficiency and has seen its perception thrown out of whack by one near-perfect game against Iowa that represented the absolute of its range. Play: Nebraska -7

Texas Tech +20 at Oklahoma, over/under: 66.5. Texas Tech has shown an ability to score on anyone, and that’s not going to stop with the dismissal of coach Matt Wells. In fact, it may even intensify under well-liked offensively minded interim coach Sonny Crumbie. Play: Texas Tech +20

Wyoming +3.5 at San Jose State, over/under: 41. Yes, the Cowboys haven’t scored a touchdown in two straight weeks, but the market has overreacted to the embarrassment. San Jose State’s offense hasn’t been much better and Wyoming’s defense will be the best unit on the field. Play: Wyoming +3.5

SMU +1.5 at Houston, over/under: 61.5. These teams may look similar, but SMU has a major edge in one key area — coaching. I much prefer coach Sonny Dykes and the well-rounded Mustang offense to coach Dana Holgorsen and the Cougars’ big-play-or-bust offense. Play: SMU +1.5

Washington +2.5 at Stanford, over/under: 48. Washington hasn’t covered in more than a month, but the market may have moved too far trying to catch. It’s time to buy low. Stanford hasn’t played a defense as stingy as Washington’s yet this season. Play: Washington +2.5