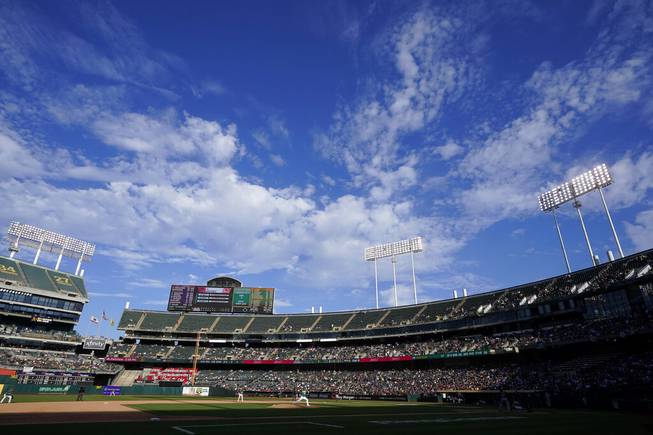 In a decisive vote this week, elected officials in the San Francisco Bay Area pushed forward a plan to build a new ballpark for the Oakland A’s.

In recent months, A’s officials have flirted with the idea of moving the Major League Baseball club to the Las Vegas area, though no detailed plans have been released for a facility here.

On Tuesday, members of the Alameda County Board of Supervisors voted 4-to-1 on a resolution to help finance the Howard Terminal Project, which calls for a $1 billion, 35,000-seat ballpark surrounded by a mixed-use development.

The resolution would secure future tax revenues to help the A’s pay for affordable housing options and other pieces of infrastructure key to the development.

In a tweet late Tuesday, Oakland Mayor Libby Schaaf said the vote to progress the plan for “a world-class waterfront ballpark district” has provided “a clear path to keep the A’s rooted in Oakland.”

A’s President Dave Kaval and other team officials made numerous trips to Southern Nevada over the summer to scout possible locations for a new ballpark in the Las Vegas Valley.

“Wherever the Oakland A’s end up, they need a new ballpark as RingCentral Coliseum opened its doors all the way back in 1966,” Las Vegas Mayor Carolyn Goodman said in a statement today. “We’ve had good meetings with the team, and we wish them the best of luck in their pursuit of a new ballpark wherever it may be located.”

The NFL’s Raiders last year moved from Oakland to Las Vegas, while the NBA’s Warriors departed Oakland for a new basketball arena in San Francisco, leaving the A’s as Oakland’s only remaining major professional sports franchise.

The A’s have expressed their desire to leave the aging RingCentral Coliseum in Oakland, widely viewed as one of the worst ballparks in baseball.