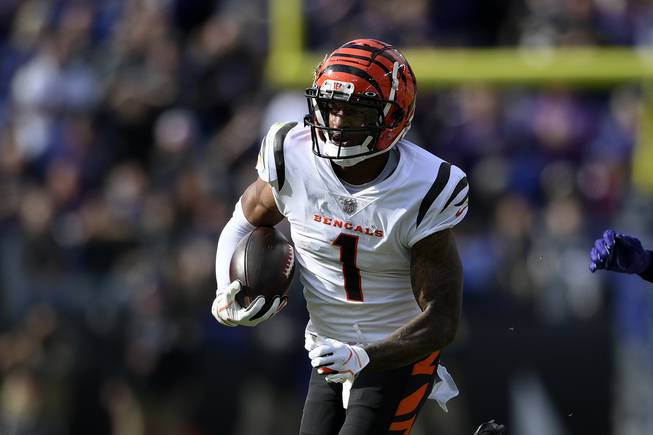 Cincinnati Bengals wide receiver Ja’Marr Chase (1) in action during the first half of an NFL football game against the Baltimore Ravens, Sunday, Oct. 24, 2021, in Baltimore.

Two of the three unlikeliest AFC teams to make the playoffs according to preseason betting odds sit in the conference’s top two spots through seven weeks of the season.

If the postseason started today, the Bengals would be the AFC No. 1 seed after their big 41-17 win over the Ravens as 6.5-point underdogs last week. The Raiders would be the No. 2 following back-to-back wins going into their bye week.

The Houston Texans were the only team priced as a longer-shot to make the AFC playoffs two months ago, as they were 7-to-1 at William Hill sports books. The Bengals were 4-to-1 while the Raiders were 3-to-1.

Both Cincinnati and Las Vegas are favored to reach the playoffs now, but not to the extent history would indicate a 5-2 team should be. The Bengals are -190 to make the playoffs, with the “no” coming back at +170 — implying about a 64% percent chance they make it.

The two teams play at Allegiant Stadium in Week 11, a game that may have looked insignificant at the start of the season but now could loom large if they stay at their current pace. The Bengals are currently a 2-point favorite on the lookahead line in the game.

But there are a lot of games to pick before then — including a slate of 15 Week 8 games. The plays are on a nice run in the pick’em with back-to-back winning weeks but the other categories have plummeted after a 4-9 overall record last week to bring the season total to 52-54-1 picking every game against the spread.

Read below for picks on every Week 8 game. Picks are separated into three confidence categories and listed in rough order of confidence. Lines are the best currently available in Las Vegas on the chosen side.

Minnesota Vikings +2.5 vs. Dallas Cowboys Sentiment is against the Vikings after two straight narrow wins against bad teams, the Panthers and the Lions, but look closer and neither of those games were as close as the final score makes them appear. The Cowboys are the slightly better team, but they’re also more beaten-up and on the road in a primetime game.

New Orleans Saints +5.5 vs. Tampa Bay Buccaneers The Saints’ defense flummoxed Tom Brady and the Buccaneers in two of three meetings a year ago, and has been even better this year. New Orleans’ offense has been inconsistent but still has a high ceiling, a big reason why the team is being underrated by the betting market.

Indianapolis Colts pick’em vs. Tennessee Titans Sell high on the Titans, which are still a highly-flawed team — especially on defense — despite back-to-back wins over the Bills and Chiefs. Indianapolis has been the more efficient team by almost any advanced rating, including EPA per play and Football Outsiders’ DVOA ratings, and familiar enough with the divisional opponent to attack its weaknesses.

Carolina Panthers +3 at Atlanta Falcons Carolina is at -0.3 net yards per play, .2 yards better than Atlanta, despite playing a tougher schedule. The Falcons have faced the second easiest slate in the NFL per Football Outsiders including not encountering any defense as strong as the Panthers’ formidable unit.

Denver Broncos -3 vs. Washington Football Team Despite sitting at a league-worst 1-6 against the spread, Washington continues to take money every week. The phenomenon is especially baffling this week considering Denver has been better by any measure including sitting neutral net yards per play to Washington’s -0.4 on the season.

Pittsburgh Steelers +3.5 at Cleveland Browns The market moved more than three points against the Browns last week, but now is back to steadily shifting towards them after a 17-14 victory over the Broncos as closing 1.5-point favorites. The 180 might be a little premature, as although the Browns will likely be healthier this week, they’re still one of the more beaten-up teams in the league.

New York Jets +11.5 vs. Cincinnati Bengals Does one admittedly impressive beatdown of the Ravens immediately lift the Bengals to the top tier of NFL teams? The betting market implies so, as the lookahead line on this game was -3.5. That’s as large of a one-week move as you’ll ever see — injury situations included — and feels too drastic regardless of who’s playing quarterback for the Jets.

Seattle Seahawks -3 vs. Jacksonville Jaguars The Seahawks have a positive net yard per play in their last two games combined, both of which they’ve lost by a total of six points. In other words, they’re not near bad as conventional wisdom. They also have one of the biggest home field advantages in the NFL, especially when accounting for travel in this situation.

Green Bay Packers +6.5 at Arizona Cardinals This line moved 3.5 points since it was announced that Packers wide receiver Davante Adams tested positive for COVID-19 and could miss Thursday Night Football. No receiver, not even potentially the best one in the league, should cause that big of a shift. And now it sounds like he could play anyway if he has another negative test.

Miami Dolphins +14 at Buffalo Bills Buffalo has been the most efficient team in the league, but it’s still a little uncomfortable to lay big numbers with it considering the offense is slightly below average with an explosive play rate of less than 10%. The Dolphins were only 3.5-point underdogs during the teams’ first meeting this season.

Philadelphia Eagles -3 at Detroit Lions Detroit put everything into last week’s game at the Los Angeles Rams, and still could barely manage a cover in a 28-19 loss. It’s fair to wonder how much the beaten-down Lions have left and at least enough of a question to pick off some of the few remaining 3s in town. Most sports books are at Philadelphia -3.5, which is the fair price.

Houston Texans +15 vs. Detroit Lions If Tyrod Taylor returns for the Texans, and it’s looking increasingly likely the veteran quarterback will, then this number is about a point too high. It therefore feels like an obligation to pick the Texans, even though actually betting on a team as overmatched in every area as they will be against the Rams would be a bridge too far.

San Francisco 49ers -4 at Chicago Bears This spread has jumped up a key number since news came out that Khalil Mack would miss the game with a foot injury. That seems slightly excessive, but it might be worth paying a premium to avoid counting on the Bears’ offense. Chicago is averaging 4.4 yards per play, the worst mark of any NFL team in the last three years.

New York Giants +10 at Kansas City Chiefs The number looks right, but giving the Chiefs the benefit of the doubt when I have no real opinion on their games has helped torpedo my overall record. The Giants are just frisky enough on offense to stay within single digits, even if it potentially comes via backdoor cover.