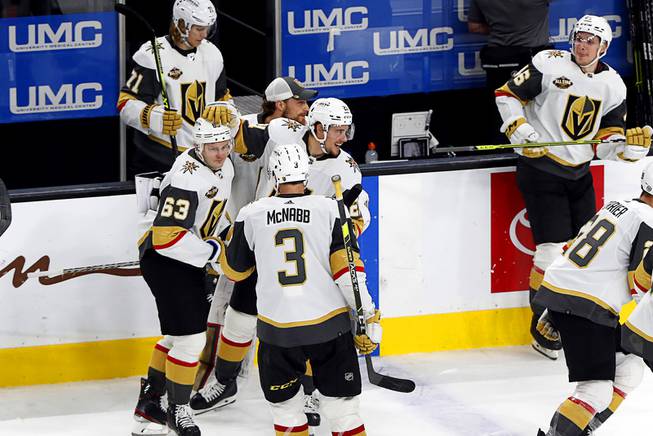 Golden Knights coach Pete DeBoer quickly pored over some analytics on the bench to decide which player to send out for his team’s fourth penalty shot as part of a shootout against the Ducks Friday night at T-Mobile Arena.

He hadn’t yet come to a conclusion when assistant coach Ryan Craig chimed in with an option that wasn’t under consideration — Evgenii Dadonov.

“Ryan said, ‘He’s scored two games in a row,’” DeBoer recounted. “He’s historically been a streaky scorer, so we put him out there.”

Make it three games in a row — and two straight game-winners from Dadonov. The Russian role player went right after Ducks goalie John Gibson and shot the puck through his legs to lift the Golden Knights to a 5-4 victory, giving Vegas a three-game winning streak.

Dadonov scored in overtime Wednesday in Dallas to allow Vegas to survive a lackadaisical performance. On Friday, he made sure a much livelier start didn’t go to waste because of a late slide that saw the Golden Knights give up three goals in the final 10 minutes of regulation.

Dadonov, acquired in a trade from the Senators this offseason, has been a wholly unlikely savior as the 32-year-old veteran himself didn’t expect to be put into the shootout. He wasn’t lobbying DeBoer or the staff to take the extra frame after both teams made one of their standard first three attempts.

“He just put me in there,” Dadonov said of DeBoer. “I think in a game, a penalty shot, I’ve scored a couple but after a game, in a shootout, that’s my first in the NHL.”

Dadonov is now 1-for-4 lifetime in shootouts. He managed what a pair of more obvious Golden Knights’ penalty-shot choices, Jonathan Marchessault and Chandler Stephenson, couldn’t in beating Gibson.

The shootout was only extended after Nicolas Roy scored on Gibson on Vegas’ third chance. Vegas goalie Robin Lehner, who’s traditionally struggled in shootouts, turned away three straight shots after the Ducks’ Trevor Zegras beat him on the first attempt.

“I’ve been working quite a bit on it this season,” Lehner said of his ability to stop penalty shots.

The shootout heroics of Lehner and Dadonov further helped the Golden Knights avoid what DeBoer described as “an absolutely potentially disastrous start.” Hamstrung by injuries, Vegas fell to 1-4 on the year in its last home game on Sunday before now bouncing back to win three straight. They’ve returned to the thick of the Pacific Division race with a .500 record and eight early standings points.

DeBoer has preached a stick-to-itiveness to his players to weather the early troubles and an ability to “get up off the mat” when things go wrong. Perhaps no one has personified the mindset better than Dadonov.

Vegas probably had its best offensive game of the year against the Ducks with Stephenson, Marchessault and Nick Hague each chipping in two points apiece, but Lehner and the defense couldn’t hold onto the lead. The Ducks scored the initial two of their three third-period goals with shots right outside the crease on Lehner.

On the third, Lehner helped knock a deflected puck from Adam Henrique into the net.

“It’s that time of year: You look around the league, a lot of blown leads,” DeBoer said. “Teams don’t have things locked down yet. I think you combine that with five games in eight nights this week and it’s some tired guys.”

“I really do believe fatigue played a role in the second half of that game, so you’ve got to be careful from a coaching perspective critiquing that too much.”

That might be true, but it’s a lot easier to say after a victory. Blowing a game to Anaheim, who was playing on a back-to-back and considered one of the worst teams in the league, would have hurt and potentially reopened wounds that Vegas endured with the rough start to the year.

One point in the standings for an overtime loss would have been no consolation, as Marchessault made clear with his characteristically stern postgame comments.

“We were a little lucky to hold onto the win tonight,” Marchessault said. “As a team that wants to make the playoff and go far in it, we can’t let a team come back in the game when we’re up 4-1, 4-2. It’s disappointing but for us with what’s happening right now, we’ll take the win like that.”

The Golden Knights mainly brought in Dadonov with hopes that he could help repair what had been one of the league’s worst power-play units. That hasn’t happened — Vegas had no opportunities against the Ducks to score on the man advantage for the first time this year — but Dadonov may have done one better by emerging into an endgame pillar.

It’s a surprise, and something he can’t even explain.

“I don’t know,” Dadonov said when asked for his mindset during the game-winning penalty shot. “I just went in there, tried to keep an eye on the goalie and find the hole to shoot.”

With cannon on the line, UNLV turns in rock-bottom performance