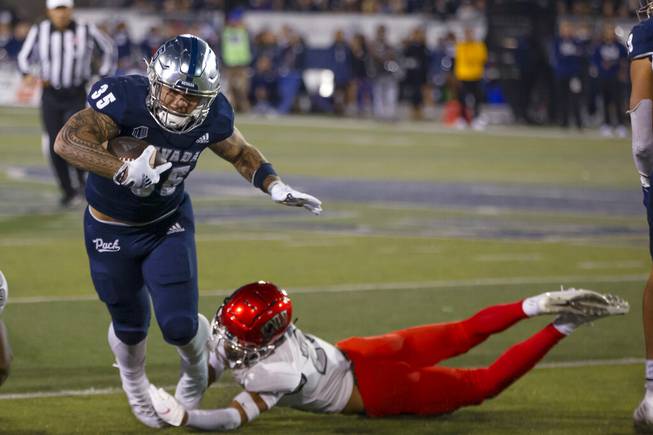 With cannon on the line, UNLV turns in rock-bottom performance

Nevada running back Toa Taua (35) is tackled by UNLV’s Cameron Oliver (25) during the first half of an NCAA college football game in Reno, Friday, Oct. 29, 2021.

If you look at the UNLV football schedule for the 2021 season, it will show four games remaining. But it’s hard to imagine the scarlet and gray having much left in the tank for those final contests after the way they appeared to sleepwalk through a humiliating 51-20 loss at UNR on Friday.

UNLV is now 0-8. The program is 0-14 over the last two seasons. The Fremont Cannon is still blue. If there’s anything else left to play for — maybe that elusive first win qualifies — the team sure didn’t show it in falling behind 34-0 against a clearly superior Wolf Pack squad.

The final score wasn’t the most concerning aspect of the loss; given the talent mismatch in UNR’s favor, a blowout was always the probable outcome, which is why the Wolf Pack went in as 20-point favorites.

But for maybe the first time all season, UNLV failed to fight. Marcus Arroyo’s crew put forth a lifeless performance in all facets of the game. There were defensive players on the field who obviously shied away from making tackles. Offensive players jogged on plays when the ball went to the other side of the field. And the players weren’t alone in their lack of want-to; trailing 20-0 with four minutes left in the first half and facing a 4th-and-7 at his own 48-yard line, Arroyo elected to punt.

It was a noncompetitive side of this UNLV team that, despite the winless record, Arroyo hadn’t seen this season.

“We’re obviously disappointed to come in here and play the way we played,” Arroyo said. “We’ve got to play better to beat a team like that.”

UNLV’s Brennon Scott (22) is held back by team members after being call for a personal foul against Nevada during the first half of an NCAA college football game in Reno, Friday, Oct. 29, 2021.

Perhaps an emotional letdown was to be expected. Humans can only have their hearts torn out so many times before it takes a toll, and after losing four straight games in the final minutes, Arroyo voiced his concern earlier this week that UNLV might hit that wall at some point.

It was evident from the opening kickoff that UNLV did not come to play. UNR marched down the field with ease, led by quarterback Carson Strong, who hit passes of 44 and 20 yards to get the Pack inside the five. Then he tossed an easy 4-yard score to Cole Turner to make it 7-0 just minutes into the game.

For a UNLV team that has started strong in most of its games this season — they’ve lost five contests in which they led at the half — it was surprising to see them get bulldozed so thoroughly and so quickly.

Arroyo felt his team was off from the beginning.

“You could just see we were out of rhythm in all facets,” Arroyo said. “I’ve got to do a better job, we can all do a better job of getting ourselves in a rhythm from the run game, the pass game, up front and making sure we’re ready to come out swinging. We had too slow of a start, and that hadn’t happened to us very often, so we’ve got to look at what really caused that.”

UNLV received the ball to start the second half, and that turned out to be a disaster. On the second play of that drive, quarterback Cameron Friel was intercepted and UNR cornerback Tyson Williams returned it 50 yards for a touchdown to make it 27-0.

UNLV finally did get on the board late in the third quarter via a meaningless touchdown pass from Friel to Kyle Williams.

Friel completed 27-of-41 passes on the night for 283 yards. Kyle Williams caught five balls for 60 yards and a score. Steve Jenkins had a nice statistical game with 12 catches for 133 yards and a touchdown. Most of their production came long after the game had been decided.

Charles Williams, who came into the game 75 yards short of breaking UNLV’s all-time rushing record, came up well short of that benchmark. The senior carried 17 times and managed just 30 yards against the UNR defensive front.

On the opposite sideline, Strong finished with 417 yards and four touchdowns. As a team, UNR gained 6.4 yards per play while UNLV was held to 4.5 yards.

UNLV will now try to regroup not from a heartbreaking defeat, but from the kind of demoralizing loss that can erase a team’s will to compete. They have seven days to figure it out before traveling to take on New Mexico on Nov. 6.

Jenkins believes he and his teammates are capable of getting up from this knockout punch.

“Just going to practice, going into film, starting off trying to win that day,” Jenkins said. “Not worrying about who we play next, just going in tomorrow and watching film. Be 1-0 in film, then 1-0 the next day and just keep stacking that, and it’s all going to put itself together.”