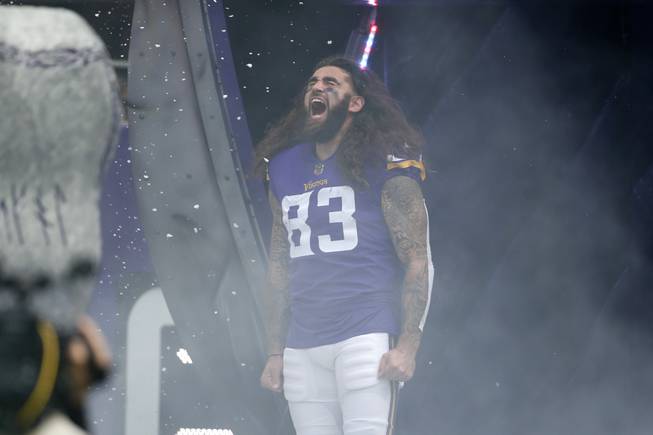 Minnesota Vikings tight end Tyler Conklin (83) reacts as he walks onto the field before an NFL football game against the Detroit Lions, Sunday, Oct. 10, 2021, in Minneapolis.

Last week, it was Kyle Pitts and the Atlanta Falcons who spoiled the column’s hopes of a big payday. The Falcons’ late game-winning drive over the Dolphins was the only thing to prevent a near 12-to-1 moneyline parlay from cashing.

To deal with the beats, it’s important to remember what you do have more than what you could have had. And, all in all, Sunday Sweats got a lot out of Week 7, namely a fourth straight winning week for the column with the bottom line continuing to climb in the right direction.

The goal for Week 8 is to make it five straight winning columns, regardless of what route it takes to get there.

Despite some recent games indicating the opposite, both of these teams are more trustworthy on defense than offense. Buffalo seems unlikely to give up 34 points like it did in a loss to Tennessee two weeks ago for the rest of the year, let alone off a bye week. As a divisional opponent, Miami should have some clue by now as to how to slow Buffalo with a talented defense that hasn’t lived up to its ability level yet this season. As a bonus, the weather forecast is calling for wind and rain in Orchard Park, N.Y. A lot of factors are pointing towards the under, and South Point has a better-than-market price on it.

My confidence level for this one is pretty low, but the teaser pickings are slim this week. The Vikings were a great 6-point leg earlier in the week when they were +1.5 or +2.5, but Dak Prescott ruined that option by sounding uncertain about whether he would play on Sunday Night Football. The market went reeling and the favorite flipped in that game. The Titans now remain as the only textbook through-the-3-and-7 option at +2.5, but that proposition scares me so I’m going with a different strategy — picking two sides to go through the 7 and 10. The Saints and Patriots both have terrific shots at an upset — over the Buccaneers and Chargers, respectively — so getting them at double digits is appealing.

BetMGM’s current moneyline on Eagles at Lions — with the road team favored at -175 and the home team coming back at +155 — implies only a 61.5% chance of a Philadelphia win. The Eagles must have a higher probability than that. They’ve been underachievers on the year, but still have a roster that should overpower the Lions. On the contrary, I’m not expecting the Saints to necessarily beat the Buccaneers, but I do think they have a better shot than the 33% their +180 line currently implies. New Orleans’ defense should be a challenge for Tampa Bay and give it a chance to win a close game. Not much stands out on the moneyline front this week, but these two may both hold some value.

Dallas’ defense has made big strides this season and deserves all the credit it’s gotten, but covering tight ends is still an issue for it. The Cowboys rank dead-last in the league in defending tight ends according to Football Outsiders. That means this could be a great spot for the Vikings’ slightly under-utilized tight end. Conklin has only scored one touchdown so far this season, but he drew rave reviews out of Vikings’ training camp and had his best game a week ago with three catches for 71 yards. Minnesota has targeted him frequently when it senses it has a matchup advantage. It will have a matchup advantage here.

The Ducks must still think we’re playing in last year’s shortened season with how condensed their schedule has been. Anaheim will be playing its fourth game in six nights on Sunday, a daunting slate even for a team like the Ducks that has a relatively young roster. The Canadiens are on a back-to-back themselves, but Saturday’s game was an afternoon tilt down the street against the Kings. Their fatigue shouldn’t be as much of a factor. Montreal has started the season terribly, but it’s still more talented than Anaheim. The Ducks are in a rut having lost six in a row including back-to-back defeats in overtime. That adds even more miles. The situation should have Montreal as a slightly larger favorite.

Injuries, analytics and a strong goalie: Early takeaways from the Golden Knights’ season