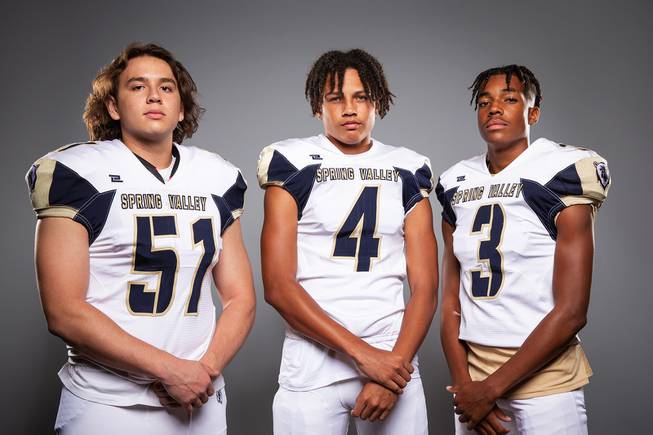 Members of the Spring Valley High School football team are pictured during the Las Vegas Sun’s high school football media day at the Red Rock Resort on August 3rd, 2021. They include, from left, Carlos Reza, Jalen Humphrey and Kameron Robins.

The Silverado, Las Vegas, Coronado and Shadow Ridge football teams will open the playoffs Friday after receiving a bye in the first round. That brings up a great question: Is receiving a bye into the second leg of the playoffs a good thing or bad thing in high school football? What about momentum? Could that be lost for say Coronado, which has won its last five meetings. We discuss that and more on other edition of Prep Sports Now.

The high school football playoff bracket in the class 4A was abruptly altered Tuesday when Clark was forced to forfeit its win last week over Spring Valley for a roster issue.

Two players who were called up to the varsity squad from the junior varsity weren’t probably added to the roster, forcing the Chargers out of the postseason on a technicality. Clark’s result over Spring Valley would have been the program’s first playoff win since the 1990s.

“I really feel bad for the kids. We worked extremely hard to get to this point,” Clark coach Deumaine Reeder messaged the Sun.

Spring Valley agreed to fill the spot in the state quarterfinals against Silverado, meaning they could have the dubious honor of closing the season with back-to-back postseason defeats.

That also happened in 2019 when Arbor View lost its playoff opener to Canyon Springs, which was later determined to have used an ineligible player. Arbor View took Canyon Springs’ spot in the next round, only to be eliminated by Desert Pines.

Will Spring Valley make the most of its second chance? Read below for our weekly picks, which are 128-29 on the season.

Liberty beat Arbor View in the season opener by 28 points despite penalties, interceptions and surrendering a kickoff return to open the game. Patriots won’t be as careless this time. Liberty 50, Arbor View 14

Yes, it’s tough to beat a team twice in three weeks. But don’t except the result to change when Foothill tries to upset the Gaels. Gorman, after all, hasn’t been scored on since mid-September. Gorman 52, Foothill 0

This has the makings of a low-scoring, physical game — just like when they met earlier this season. Shadow Ridge 21, Durango 20

Basic enters on a three-game winning streak and has plenty of momentum after playing last week. Coronado had a playoff bye, and that’s problematic. Listen to our Prep Sports Now podcast for the debate. Higher-seeded Coronado wins, but it’s a struggle. Coroando 27, Basic 25

Traveling from Southern Highlands to the Sunrise Mountain area of east Las Vegas on a school bus during Friday rush hour — and through construction on Nellis Boulevard — is a massive disadvantage for Sierra Vista. Las Vegas 34, Sierra Vista 19

This is Virgin Valley’s fourth trip for to Pahrump in the last six months, as the schools also played twice in the abbreviated spring season. Virgin Valley has won the previous three meetings. I just don’t see the Bulldogs winning a fourth. Pahrump is the most physical team left in the class 3A — even more physical than state favorite Moapa Valley. Virgin Valley won’t be able to slow down Pahrump’s misdirection rushing attack. Pahrump 22, Virgin Valley 20

Nobody wins against Moapa Valley in Overton in November, but SLAM won’t be a pushover. It is 8-3 on the season with wins over Virgin Valley and Boulder City. It only lost by two points to Pahrump. This game will be much closer than many think. Moapa Valley 30, SLAM 22