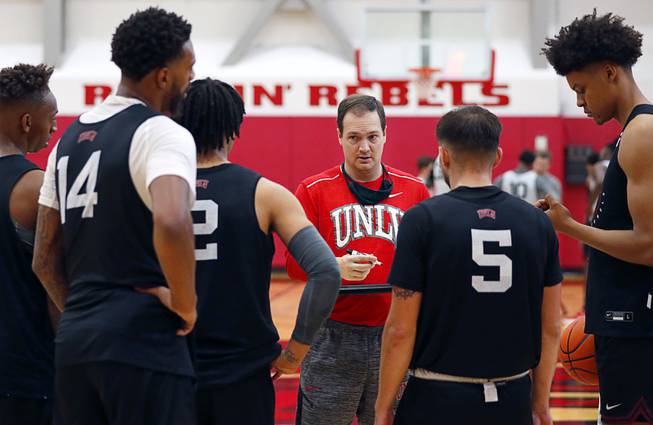 Kevin Kruger can tell the start of the regular season is drawing closer just by listening to his team.

The nonstop din of chatter and wisecracks that usually permeates any team gathering — film sessions, breaks in practice, etc. — has dwindled significantly since UNLV played its second and final closed-door scrimmage over the weekend. With no exhibition contests lined up, the next date on the calendar is the season opener against Gardner-Webb on Nov. 10.

The players have noticed, and the mood has changed as the team shifts its focus from the offseason to the real thing.

All of a sudden, the Mendenhall Center sounds like the library.

“It’s quieter,” Kruger said. “That’s part of the season coming closer. When you’re a month and a half out things are still pretty lighthearted. Closer to the season you see things get tighter — not in a bad way, but they can kind of see the game [approaching] now and that brings a different level of intensity and focus.

“It just has a different feel to it,” he continued. “The first game is a week away and it feels more real.”

In addition to less hooting and hollering during downtime, Kruger also senses that his players have increased their intensity on the court. UNLV played a scrimmage against Northern Arizona on Saturday, and while NCAA rules prevent Kruger from commenting specifically on that matchup, he liked the way his players have turned up their effort level in going from intrasquad practices to live game action.

That especially applies to the defensive end of the floor.

“As I’ve said from Day 1, this isn’t a group that is going to struggle with effort,” Kruger said. “That’s going to be our M.O., being a group that plays hard and understands the value of each possession.”

Kruger doesn’t think UNLV is ready for tipoff quite yet, but given another week of practice he sounds confident they’ll get there.

“I wouldn’t say we’re ready yet,” he said, “but at the same time we’re not far from where we want to be. This is a group that has made strides and gotten better throughout the offseason, and in the past week. I’m excited about the progress that has been made.”

The players aren’t the only group preparing for the regular season. As a first-year head coach, the two scrimmages gave Kruger and his staff an opportunity to work out the kinks on the sideline. Calling timeouts, getting in and out of huddles and communicating substitutions are just a few of the coaching responsibilities that are usually glossed over and taken for granted, but Kruger thinks he and his staff have all the technical details worked out.

He also enjoyed it.

“It went well,” Kruger said of his first time in charge. “I thought it was definitely exciting and fun.”