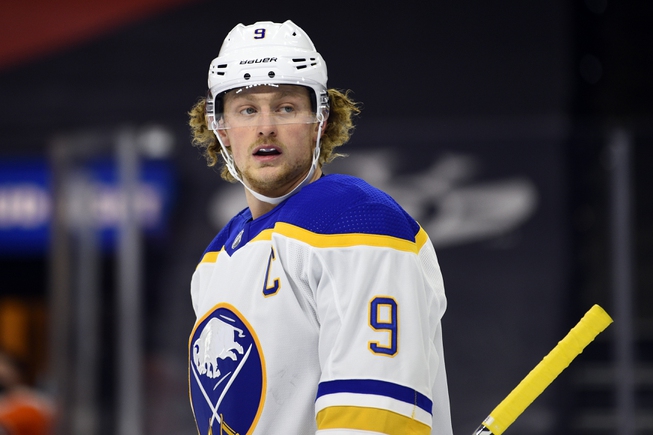 The Jack Eichel puzzle: What questions remain for the Golden Knights?

FILE- In this Jan. 19, 2021, file photo, Buffalo Sabres’ Jack Eichel looks on during a stoppage in an NHL hockey game against the Philadelphia Flyers in Philadelphia. (AP Photo/Derik Hamilton, File

In a vacuum, acquiring one of the best hockey players on Earth is a cause for unbridled celebration. Jack Eichel is a Golden Knight, acquired early this morning for Alex Tuch, Peyton Krebs and a first-round pick, let it be sung throughout the Las Vegas valley.

But the reason Eichel was available at all is worth keeping an eye on, and actually getting him on the ice is going to cause a massive financial headache.

Eichel is injured and not expected back for months after he undergoes neck surgery. He’s also expensive, and fitting in his massive cap hit is going to cause some disruptions to the team soon, even if it didn’t today.

“I’m trying to process it all still. Just really excited,” Eichel said in a televised interview with ESPN. “Just excited to get back on the ice and get back to doing what I love, and that’s play hockey.”

Let’s start with the money. Eichel carries a cap hit of $10 million this season and for four more after it, making him the highest-paid player in team history, surpassing Mark Stone’s $9.5 million figure.

Tuch and Krebs carried a combined cap hit of just over $5.6 million, meaning Vegas added about $4.4 million in net salary.

That’s significant. Vegas was over the cap when the season began, placing Tuch on long-term injured reserve to get in under the number.

Since the season began, they’ve also placed Stone and Max Pacioretty ($7 million) on long-term injured reserve. Eichel will join them there, allowing them to hold off on addressing more specific issues until everyone returns to health.

When fully healthy, the Golden Knights’ roster is about $10 million over the salary cap, which can be trimmed to just over $7 million by moving off Jonas Rondbjerg, Jake Leschyshyn, Michael Amadio and Ben Hutton.

Where does that $7 million-plus come from? That’s the question that will shape the rest of the season.

Some have made the comparisons to last year’s Tampa Bay Lightning, which kept former MVP Nikita Kucherov on long-term injured reserve all season and brought him back for the playoffs, where the salary cap does not apply.

That seems unlikely to apply to Vegas’ situation, which would require Eichel, Stone or Pacioretty to miss the entire season. That’s not likely for Stone or Pacioretty, and it would be unique, though not unheard of, for a player to make his team debut in the postseason.

“It’s an ongoing dance that capologists around the National Hockey League have to be adept at,” General Manager Kelly McCrimmon said. “You do have to ask yourself what happens if we return to full health, and yet sometimes you never return to full health. We’ve never experienced anything quite like what we’re going through right now. One of the downsides of injuries like we have currently is they sometimes lead to more injuries from overuse of players and that type of thing.

“If and when that poses a challenge for us, we’ll address it at that time. All things considered, we’re happy to have Jack Eichel as part of our organization and prepared to deal with that if need be.”

There are a lot of factors that could make things more complicated, but assuming full health, one of the $5 million right wingers could be a casualty.

Both Reilly Smith and Evgenii Dadonov have the same cap hit, and Smith is set to be a free agent at year’s end, while Dadonov is also signed for next season. Moving one of those players would get most of the way to solving the cap puzzle.

The rest of it could come from a player making a little less. Mattias Janmark and his $2 million would almost get them there, and moving Janmark and Brett Howden would do it. But moving four forwards off the roster when factoring in Krebs is a tough ask.

Instead, the Golden Knights could turn to the blue line and look to move someone like Brayden McNabb. He makes $2.5 million against the cap and like Smith is an unrestricted free agent at the end of the season.

Here’s how the Golden Knights’ lineup could look, with cap figures in millions, if they were to move Dadonov and McNabb and everything else worked out. All numbers are courtesy of CapFriendly. Of the below, Janmark is the only one who is an unrestricted free agent this summer.

Now onto Eichel’s surgery. He will undergo what is known as an artificial disk replacement (ADR), a procedure never performed on an active NHL player before but not uncommon in the world outside hockey.

McCrimmon was quick to point out other athletes, including combat athletes, have undergone this operation in the past with promising results.

The Sabres did not want Eichel to have the surgery, preferring the more-standard fusion surgery. It led to a falling out between the player and team, where Eichel publicly (through his agents) requested a trade, and Buffalo stripped him of the captaincy.

The Golden Knights will permit Eichel to have his preferred surgery, and the hope is to have him back on the ice in three to five months. McCrimmon, however, cautioned that is far from a certainty based on the unknown nature of the procedure on hockey players. The Stanley Cup Playoffs begin at the end of April, about five months from now.

“Why wouldn’t his people want what’s best for him? So none of us in this room have the level of expertise that would be required for an opinion,” McCrimmon said. “I defer to the people that he’s entrusted himself and his health to to make that decision and we’ll obviously have a hand in next steps — rehabilitation, return to play, those types of things. But the decision of the surgery is one that we respectfully defer to Jack and his representatives.”

The surgery will almost certainly keep him off Team USA’s Olympic roster, where he was projected to be one of the top centers. Even if he is in game shape by mid-February — an ambitious timeline — the Golden Knights might not be comfortable with him getting his first action in more than a year playing for someone other than them.

And when he does return, the Golden Knights are getting the bona fide No. 1 center they haven’t had since William Karlsson scored 43 goals in the inaugural season. He’s nearly a point-per-game player over his six NHL seasons and had 36 goals in 78 points in 68 games in his last fully healthy season of 2019-20. He had two goals and 19 points in 20 games before his injury last season.

Eichel is a superstar, one of the best centers in the world when he’s healthy. The Golden Knights expect him to be just that by the end of the season, and they’ll have him for four more years. Still just 25, he’s the kind of player you accept the ensuing cap headaches for if the alternative is not having him on your roster.

That is, after all, why you trade for Eichel. Figure out the specifics later.

“We were not in the market for another centerman. But this isn’t just another centerman,” McCrimmon said. “This was interest that was solely determined by the quality of the player that was available. I believe if you look at Stanley Cup champions, an elite center is certainly a big, big part of that.”