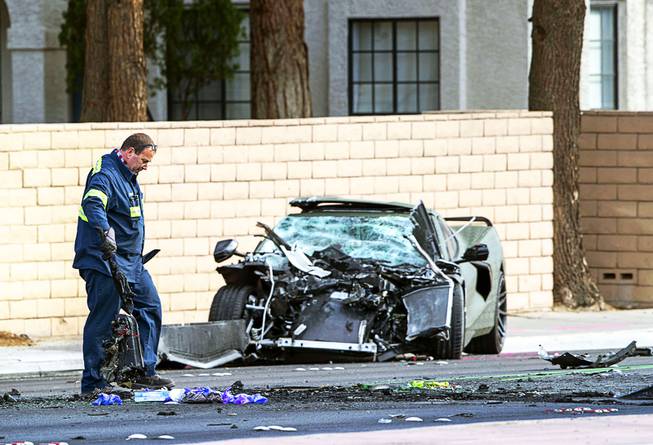 A tow operator carries car parts near a Chevrolet Corvette at the scene of a fatal crash on South Rainbow Boulevard between Tropicana Avenue and Flamingo Road Tuesday, Nov. 02, 2021. The driver of a Corvette, identified as Henry Ruggs III, a wide receiver for the Las Vegas Raiders, will be charged with DUI resulting in death, police said.

Derek Carr touched on and eventually listed off several emotions the Raiders were experiencing Wednesday at the team’s Henderson headquarters regarding the death of Tina Tintor in a fatal crash allegedly caused by former teammate Henry Ruggs III.

“We like to talk about this being a family and we are a family atmosphere here with our team and your guilt of not knowing what maybe was going on when Henry left the building, or not being there to have somebody be the adult in that situation and stop those series of decisions from happening,” Olson said. “That’s the guilt you feel as a coach and as a teammate.”

The Raiders had their last full practice of the week Thursday. They’ll hold a shorter session before a flight to Newark, N.J., scheduled for today ahead of Sunday’s game against the New York Giants.

Although coaches characterized the practice as a successful one for the second straight day, the tragic events that occurred early Tuesday morning continued to loom over everything. Carr remains the only player who’s spoken publicly on the fatal crash, as otherwise no one on the roster was made available to media.

Olson repeated many of the same thoughts shared by interim coach Rich Bisaccia the day before, emphasizing a focus on the victim. He became the first Raider official to mention Tintor by name, referring to her multiple times during a nine-minute news conference.

“The entire Raider organization’s thoughts and prayers are with the family of Tina Tintor,” Olson said at the onset. “We are deeply saddened by this tragedy, and it’s affected a number of people. A life has been taken and we can’t get it back.”

Carr on Wednesday described being haunted by wondering if he could have helped, and both Olson and defensive coordinator Gus Bradley shared a similar thought process on Thursday. In addition to Carr having publicly offered in a news conference to be there for any teammate at “3 a.m.” or whenever they need weeks ago, Bisaccia had also addressed the team with the same safe-transportation message going into the bye week, according to Bradley.

“That’s why it’s even more unfortunate,” Bradley said. “It was brought up and talked about, and then a situation like this occurs, but I think that’s brought some thought to everybody on it. I think you pause and think about the people involved — an unfortunate death and then Henry. And then I think you pause and there are lessons for us to teach our kids and our family and that’s the string of emotions that you need a little time to go through.”

The Raiders committed to giving their players the resources to go through that string of emotion even though they proceeded with a normal game-week schedule.

“We’ve offered counseling to all our players,” Olson said. “I think everyone manages it and deals with grief in their own way, but from what I’ve witnessed this week, as difficult as it was, it was a good week of work.”

Ruggs was “a very popular player” among his teammates, according to Olson, which means the feeling of guilt likely extends to others beyond the coach. Other players may wish they could have done something to prevent Tintor’s death and help Ruggs, and the coaching staff are encouraging them to not suppress such feelings.

To move forward, the Raiders need to handle their emotions.

“I think there is some very hard, strong feelings about what took place and they’re dealing with it the best they can,” Bradley said. “But it’s not a situation where I look at our team and I go, ‘Woah, we’ve got some work to do to help pull everybody out of this.’ I think they are helping each other to do that.”

The Jack Eichel puzzle: What questions remain for the Golden Knights?