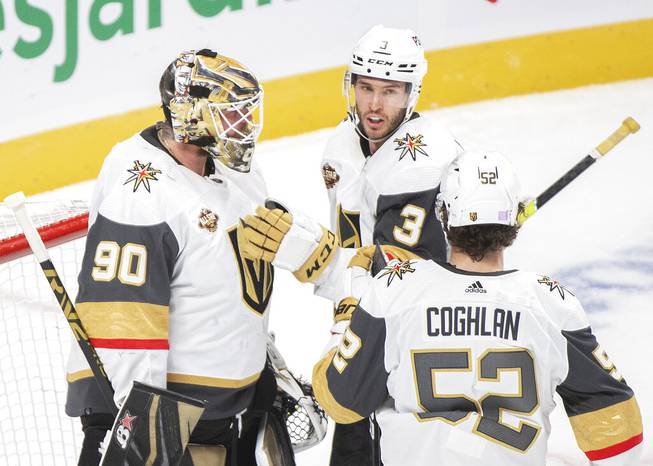 There was nothing about the first period Saturday that suggested the Golden Knights would beat the Montreal Canadiens. It was perhaps the worst 20 minutes in team history, as Vegas registered fewer shots than Montreal had goals.

But the Golden Knights power play, which had not converted all season, was the unlikely hero.

The Golden Knights scored two power-play goals and another at even strength in the second period, wiping away an ugly first period and allowing them to leave Bell Centre with an impressive, albeit surprising, 5-2 victory.

“We knew it was going to be an opportunity to show what we could do after a period that we didn’t like,” defenseman Alex Pietrangelo said. “You’ve got to be proud of the effort of us coming out in the second playing the way that we did.”

The ability to overcome the disaster that was the first period was nothing short of extraordinary. Vegas didn’t record its first shot on goal until 10:58 of the frame, a Pietrangelo offering from 68 feet away.

That held up as the Golden Knights’ only shot on goal of the period, marking a franchise record for fewest in a frame. The Canadiens meanwhile had 20 shots, the largest differential in any period by any team in the league this season. Montreal scored twice, and managed a 99.5% expected-goals rate (by Natural Stat Trick) that doesn’t seem possible.

“Tonight was not just a poor start, it was a horrendous start, so there’s a whole different level of how we started that game,” coach Pete DeBoer said. “Thankfully our goalie was our best player early and we’ve got a lot of character in that room and our guys fixed it.”

Vegas was scoreless on its first 19 tries with the man advantage this season and the only team in the league without a power-play goal. Pietrangelo quickly changed that, blasting home a one-timer to end the streak. Later in the frame Dylan Coghlan roofed one by goalie Jake Allen, as Vegas finished the night 2-for-2 on the power play.

“Sometimes you’ve just got to simplify it and take the shots when they’re there. That’s pretty much all we did tonight,” Pietrangelo said. “We’ve been looking at a lot of different things, lot of different ways that we can score, but sometimes you just need a bounce or two to kind of kick-start it.”

Between power-play goals, Jonathan Marchessault scored his third goal in the last two games. When Coghlan scored his goal to put Vegas on top, the Canadiens led 25-7 in shots on goal.

The Golden Knights had two empty-net goals, by Chandler Stephenson and Brayden McNabb, in the third period to bring the game to its final margin. Vegas has won five of six and in the last two, both victories, outscored opponents by a combined 10-2 in the second and third periods.

Like in several of the victories this season, Lehner was the reason Vegas had a chance for a late push. In the first period alone he stopped Montreal’s first 17 shots before conceding two goals. He finished with 36 saves, a game after making 38 saves which marked his personal high with the Golden Knights.

“Obviously we weren’t happy how we came out. It’s been a little bit of a trend that we obviously have to take a look at,” Lehner said. “You know what, we stepped up in the locker room — leaders, coach, everyone — said that’s enough and after their 2-on-1 that they had we played excellent the rest of the game.”