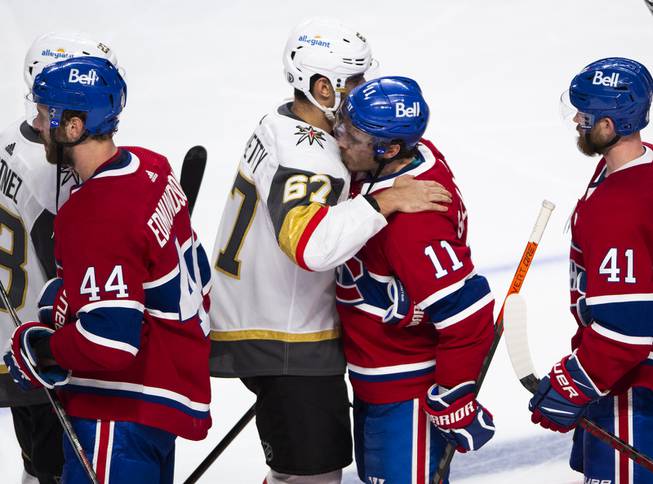 The last time the Golden Knights were in Montreal, they watched the Canadiens celebrate their trip to the Stanley Cup Final, having just beaten Vegas in the league semifinals.

The Golden Knights make their return trip today at 4 p.m., with an admittedly different cast of characters. Captain Mark Stone won’t play due to injury, nor will Max Pacioretty or Zach Whitecloud, while the Canadiens are without their own captain, Shea Weber, and starting goalie Carey Price.

Regardless, wounds like that don’t go away easily. The Golden Knights believed they could win the Stanley Cup last season before the Canadiens ended that goal. The stakes aren’t nearly the same, but expect an extra jump from the Golden Knights at Bell Centre tonight.

When they last met, the Golden Knights and Canadiens were among the league’s final four as two of the top remaining teams in the NHL. That’s not the case tonight. Both teams have struggled this year, and with everyone who is out, tonight’s tilt will hardly resemble the Game 6 from June.

The Golden Knights’ struggles have been well-documented. They’ve been slammed with injuries, as only nine players on the roster have appeared in every game this season. Stone and Pacioretty, Vegas’ top two forwards, have only played two games. It’s led to a 5-5-0 record and some of the worst defensive metrics in the league.

The Canadiens, though, have been worse. Down Weber and Price, they’ve started the season 3-9-0 with a minus-16 goal differential that both rank last in the Eastern Conference. They’ve allowed 40 goals (also last in the conference) and are coming off a shutout loss to the Red Wings and a 6-2 shellacking by the Islanders, both at home.

While the Golden Knights did win Game 4 at Bell Centre last season, they’ve lost all three regular season games in Montreal, one of three NHL teams they have not beaten on the road. On their last trip, Pete DeBoer’s second game as head coach in January 2020, they trailed 3-0 after a period and rallied to force a shootout before falling.

Even with an ugly loss Tuesday in Toronto, Vegas has won three out of four, and a victory would send the Golden Knights back over .500 for the first time since opening night.

And while it wouldn’t erase the sting of last June, it will give the Golden Knights a nice boost heading into their final game of their eastern swing in Detroit on Sunday. But tonight, it’s all about the Canadiens.