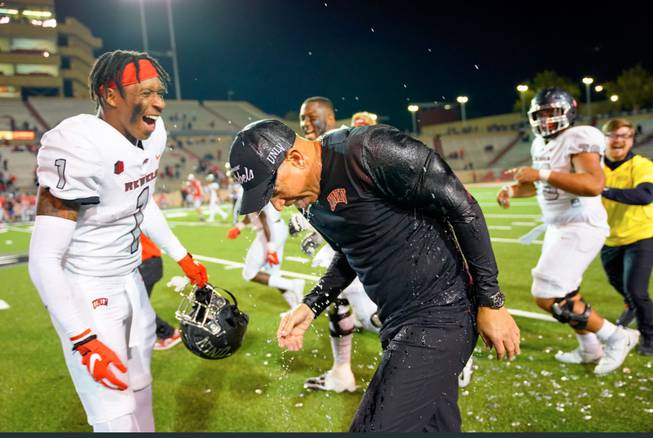 UNLV football coach Marcus Arroyo celebrates with wide receiver Kyle Williams (1) after the Rebels defeated New Mexico, 31-17, on Nov. 6, 2021. It was the program’s first win since 2019, and the first win in Arroyo’s coaching tenure.

There it is. The clock just hit zeroes on UNLV’s 31-17 victory at New Mexico, assuring the scarlet and gray won’t go winless for the second straight season.

The win has to be a huge relief for Marcus Arroyo, who steered UNLV to an 0-6 record last season in his first year as a head coach. He is now 1-14 at the helm of the program.

UNLV will head home to host Hawaii next weekend as it attempts the unthinkable—a winning streak.

Charles Williams just walked in a 2-yard touchdown to extend UNLV’s lead to 31-17 with 11:34 left in the fourth quarter. Given that New Mexico has gained just 27 yards of offense in the second half, that feels like a pretty insurmountable lead, even for the 0-8 scarlet and gray.

Williams now has 63 rushing yards and two touchdowns on the night, and he also broke the UNLV record for career rushing yards. If UNLV can close this one out and get the win, this will end up being a pretty memorable night for the sixth-year senior.

UNLV may have enjoyed bigger leads this season, but the scarlet and gray haven’t been in the driver’s seat like they are tonight. They’ll head into the fourth quarter with a 24-17 lead over New Mexico and a real shot at ending their longest-in-the-nation 14-game losing streak.

The New Mexico offense has simply collapsed since starting quarterback Isaiah Chavez departed the game in the first half. Since the break the Lobos have averaged just 2.3 yards per rush, 2.5 yards per play and have not scored.

New Mexico currently has the ball, facing a 2nd-and-12 from its own 18-yard line. If UNLV can force a punt and add on a field goal, this one should pretty much be a wrap.

Let’s see if the scarlet and gray can execute over the final 15 minutes with a win at their fingertips.

The sixth-year senior broke Tim Cornett’s career record with a 7-yard carry midway through the third quarter, breaking the mark by five yards. Williams’ next carry lost four yards, however, and his next tote gained just one yard. So for now, Williams has two more career yards than Cornett.

The drive ended in a field goal and UNLV has extended its lead to 24-17 with 7:12 left in the third quarter.

For the fifth time this season, UNLV has a lead at halftime. Will they finally be able to hold on?

After an explosive first half that saw both teams score 75-yard touchdowns (on consecutive snaps) and both teams average more than 7.0 yards per play, UNLV is up 21-17 at the break.

The scarlet and gray had a chance to possibly extend their advantage, as they drove across midfield in the final seconds. But with the ball at the New Mexico 40-yard line and 15 seconds on the clock, UNLV chose not to attempt a Hail Mary pass on fourth down; instead they let the clock run out, content to head into the locker room with a lead.

Cameron Friel has been a big-play machine, completing 10-of-19 passes for 156 yards with two touchdowns and no turnovers.

The defense has struggled to contain New Mexico’s option attack, allowing 250 rushing yards in the first half.

We are barely 20 minutes in and this game already promises to be the wildest of the year for UNLV.

The teams just traded 75-yard touchdowns on consecutive plays, and with 10:34 remaining in the second quarter, UNLV has a 21-14 lead.

New Mexico struck a devastating blow when Bobby Cole took a handoff and raced 75-yards untouched to knot the score at 14-14. After the Lobos kicked off for a touchback, Cameron Friel dropped back and launched a deep bomb to Kyle Williams; Williams caught it in stride and motored into the end zone to give UNLV the lead again.

We have already seen 318 yards of total offense combined between the two teams, and neither defense seems particularly inclined to stiffen up. This could very well turn into a back-and-forth fireworks show for the next 40 minutes.

Just as badly as things started for UNLV, that’s how fast they turned around. With 13 minutes left in the second quarter, UNLV now has a 14-7 lead.

Marcus Arroyo chose to punt on 4th-and-2 from the UNLV 48-yard line, a puzzling decision with his team trailing, 7-0, but three plays later New Mexico quarterback Isaiah Chavez was strip-sacked and UNLV recovered at the 4-yard line.

On the next play Charles Williams slammed into the end zone to knot the score, but the momentum didn’t stop there. Two plays into New Mexico’s next drive the Lobos fumbled again; UNLV linebacker Kylan Wilborn recovered, giving possession at the UNM 26.

Cameron Friel capped things off by firing a 15-yard touchdown pass to Marcus Phillips and the scarlet and gray are suddenly in business.

This game could not have gotten off to a worse start for UNLV.

New Mexico took the opening kickoff and marched 91 yards for a touchdown, running for 86 yards on the drive. Isaiah Chavez capped it with a 1-yard touchdown pass to Lobos tight end Trace Bruckler.

After the defense got blown off the field, the UNLV offense didn’t fare much better. A pair of carries netted the scarlet and gray nine yards, and on 3rd-and-1 and attempted wide receiver screen was broken up incomplete, forcing a punt.

Both teams came up empty on their second possessions, and New Mexico now has the ball again, starting at its own 11-yard line, up 7-0 with 2:13 left in the first quarter.

Cameron Friel will once again start at quarterback for UNLV. The true freshman is leading the QBs through on-field warmups, while sophomore Doug Brumfield is not in uniform.

Brumfield’s status is a bit of a surprise, as he dressed and went through pre-game warmups last week at UNR. Marcus Arroyo said during the week that Brumfield won’t play again until he is 100-percent healthy, so he may have suffered some kind of setback in practice this week.

We will learn a lot about UNLV’s resolve today, when the scarlet and gray attempt to bounce back from a humiliating loss and pick up their first win of the season at New Mexico (4 p.m., Stadium).

Marcus Arroyo had his squad playing relatively well in the four games prior to last week’s blowout defeat at UNR, suffering close losses in each contest. But at 0-8 and with a second straight winless campaign now squarely on the table, can the team rally and find that competitive spirit in time for an eminently winnable matchup against New Mexico?

True freshman Cameron Friel was on a nice trajectory throughout the 2021 season, improving on a weekly basis until he slammed into a brick wall at UNR. He was picked off three times in Reno, including two that got returned for touchdowns, and he now sports a touchdown-to-interception ratio of four-to-seven.

Now the question is when can incumbent starter Doug Brumfield get back on the field? The sophomore has battled leg and back injuries through most of the season and has yet to play a full game, but he has looked like UNLV’s most dynamic quarterback when healthy.

Brumfield has practiced in a limited manner the past two weeks, but Arroyo continues to say he won’t play in a game until he is completely 100% healthy.

“You’ve got to be able to evaluate a guy full speed,” Arroyo said. “He’s got to be 100%. Hopefully we get to the point where we can say OK, Doug’s moving full-speed and can adapt to all the stuff we’re going to ask him to do. That’s what I’m really waiting for, is to see him to 100%. He hasn’t been 100% yet. He’s been able to move and get around and do some things, but game speed is a different deal.”

There’s no doubt UNLV’s best chance to secure a victory this season would be this week with a healthy Brumfield at quarterback for every snap. Whether that’s going to happen remains to be seen.

With just four games left in the season, true freshmen around the country are getting ready to make their college debuts, as NCAA rules allow frosh to play in four contests while maintaining redshirt status.

That’s not going to be as much of a factor for UNLV down the stretch, however, as Arroyo said any freshmen who are capable of helping the team win have already been on the field.

“Most of those guys are playing, and they have been,” Arroyo said. “There’s only a handful of guys that we’ve gone through that are at the four-game stretch.”

The two most obvious freshmen contributors are Friel, who has already appeared in six games, and cornerback Cameron Oliver, who has played in all eight contests. Oliver has shown promise, with two interceptions and a pass defensed. Receiver Johnathan Baldwin has logged four appearances, meaning his next game will void his redshirt status.

Two heralded freshmen have yet to see the field: Offensive lineman Anthony Rosas, the team’s highest-rated offensive recruit in the Class of 2021, has not participated despite the play of the O-line sinking to depths not seen since before Tony Sanchez’s tenure, and top-rated defensive recruit Nick Dimitris has not been active for a game yet.

Neither Rosas or Dimitris traveled with the team to Albuquerque this week.

“If we’ve got a chance to get some of these young guys who haven’t played and still preserve their redshirt year, you can do that,” Arroyo said. “But it’s still got to be to the point where they give you a chance to win and you’re not just doing it to evaluate. So there’s a couple guys we put stars next to, but most of the guys we feel that can give you a chance, they’re playing.”

It’s been a rough year for UNLV’s secondary, as the team’s pass-defense unit has been brutalized on a weekly basis. It reached a nadir last week, when UNR quarterback Carson Strong completed 37-of-49 attempts for 417 yards and four touchdowns and barely broke a sweat while doing it.

The defensive backs should get a bit of a breather this week, as New Mexico averages just 144.7 passing yards per game and 5.6 yards per attempt, ranking the Lobos bottom-10 in the nation in both categories. Last week UNM attempted just 11 passes in a 14-3 win over Wyoming, though Isaiah Chavez was efficient with his throws (10-of-11 for 112 yards). For the season, New Mexico QBs have tossed eight touchdowns to six interceptions.

Look for the Lobos to pound the ball on the ground and limit their passing attempts. If UNLV’s front can hold up against the run, they’ve got a chance to get a good number of stops.