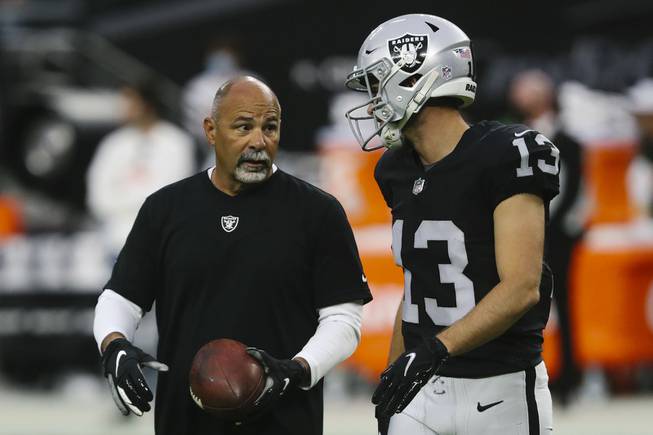 During his introductory news conference after being promoted to interim coach of the Las Vegas Raiders last month, Rich Bisaccia mentioned only one other NFL franchise — the New York Giants.

The 61-year-old’s lifelong dream of becoming an NFL head coach largely began with the Giants as a young kid growing up outside of New York City.

“My dad was the head football coach of the New York Giants, he just never told anybody,” Bisaccia said.

Bisaccia’s father wasn’t really the coach of the Giants. He said so with a straight face and caused some confusion at the time but admitted this week that it was all a joke.

“I don’t think anybody got that,” Bisaccia said with a laugh. “I think they were googling to see if my dad was the head coach of the Giants.”

Bisaccia presumably meant that his father thought he should be the head coach of the Giants given his passion, and the resulting strong opinions that come out of such diehard fandom. It was a love the interim coach also developed, and one that’s surely crossing his mind this weekend as he returns home for the first time in charge of an NFL team.

The Raiders take on the Giants at 10 a.m. Sunday about 20 minutes from Bisaccia’s hometown of Yonkers, N.Y., at MetLife Stadium in East Rutherford, N.J.

“Fortunately for me at this particular point of my career personally, we’ve played them so many times that I’ve had an opportunity to just treat it as another game,’ Bisaccia said. “Maybe that’s fortunate for me, but I do love the Giants as long as we’re not playing them.”

Bisaccia’s affinity for the Giants might have as much to do with personal connections to the coaching staff as it does sentimental reasons these days. Before he joined the Raiders, Bisaccia’s last job was a five-season stint as special teams coordinator and assistant head coach of the Dallas Cowboys under current Giants offensive coordinator Jason Garrett.

Bisaccia has also known Giants coach Joe Judge for many years dating back to the latter’s time as a special teams assistant with the Patriots.

“The special teams coaches in this league, we kind of have maybe a special bond or certainly a connection because we go through the same obstacles,” Bisaccia said. “So, the only thing I could say about Joe is he’s a tough guy and he comes from detailed coaches, which makes him an extremely detailed head football coach.”

Judge and Bisaccia couldn’t be in much different positions right now. Mired in a second straight disappointing season since taking the helm with the Giants at 2-6, Judge’s job security is waning.

Bisaccia, meanwhile, is thriving in his new role as the Raiders have played their two best games of the season since he took over. Judge has not been surprised while watching Bisaccia’s success from afar.

“He’s very situationally aware,” Judge said of Bisaccia. “He’s very fundamentally sound, in terms of how he coaches. He believes in a good, balanced offensive attack, good complementary football. That’s showing up in the couple games he’s been in charge.”

Bisaccia would likely need, at minimum, a playoff appearance to keep the Raiders’ job long-term but the team is currently on track with a 5-2 record. Bisaccia has made an even bigger impact with his leadership than his coaching, though.

He’s been a steadying force throughout a season of turmoil off the field. First, he successfully navigated the Raiders through the Jon Gruden email scandal and now he’s tasked with the working through this week’s tragic events involving former receiver Henry Ruggs III.

“There is no handbook that they give you for the obstacles that occur, whether you’re a parent, whether you’re a teacher, whether you’re, my dad drove a truck, there’s no blueprint for these things,” Bisaccia said. “So I just think we all lean on each other in there and there is a lot of other coaches on the staff that have a lot of experiences. We have players that have gone through other things, so I think we’ve done a good job of communicating with each other.”

That communication starts at the top, and Bisaccia has drawn upon his 38 years in the football coaching industry to make sure it flows smoothly. He’s made eight different stops throughout his career split between college football and the NFL, but never been on the Giants’ staff — or with any team based in his native Northeast part of the country.

But the region is still meaningful to Bisaccia, and so are the Giants.

“If I told you about my history with the Giants,” Bisaccia said, “you’d laugh.”