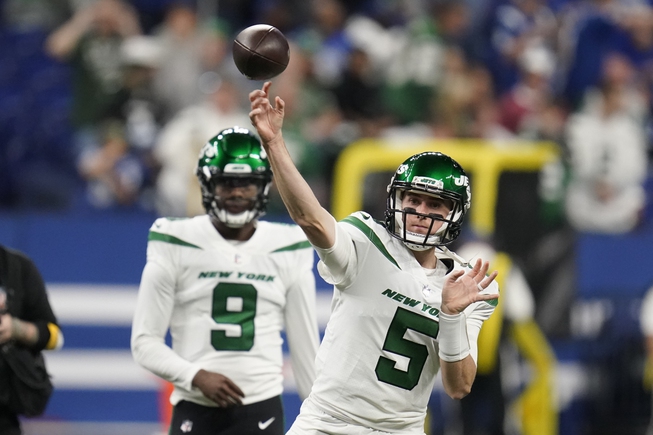 Last Sunday, the Jets put a dent in survivor pools everywhere — including Circa Sports’ $6 million version where they wiped out more than 40% of the field — by beating the Bengals outright 34-31 as 11.5-point underdogs. No other team getting more than a touchdown on the point spread had won a game this season.

They nearly continued haunting gamblers by getting inside the 10-yard line at the end of this week’s Thursday Night Football game against the Colts before an interception stymied a massive backdoor cover. Indianapolis, which led by 32 points in the third quarter, held on for a 45-30 win as 10.5-point favorites.

Neither game played any role in last week’s Sunday Sweats, which kept trucking along with another profitable showing — going 3-1 and banking $314.24. Luckily, the lack of major upsets and the always-present danger of bad beats haven’t affected the column too much thus far.

I’ll knock on wood and hope it continues for Week 9.

Both of these teams’ offenses are ahead of their defenses – yes even the Broncos, despite a perception to the contrary. Denver is 13th in offense by Football Outsiders’ DVOA, and 25th in defense. That split may only move further move in the offense’s direction with Denver getting healthier in the skill positions and the defense losing veteran leader Von Miller in a trade. The Cowboys’ offense should be able to have its way against the Broncos. Denver also isn’t as outmatched against an improved-but-still-flawed Dallas defense. Maybe it’s a different story if this game was in Denver with weather elements to factor in, but that’s not the case at AT&T Stadium. This total should be at 51.

These were already two of my favorite sides of the week, and it’s an added bonus that they both fit into standard teaser strategy by going through the 3 and the 6. I’d recommend locking this teaser in immediately because it might not be available by Sunday morning. The market seems to be slowly moving in Cleveland’s direction, and I thought this AFC North game would close around pick’em all week. Philadelphia may also flip from a slight underdog to slight favorite if recent history repeats. The Eagles have taken money right before kickoff when limits are at their highest in almost every game this season, indicating that someone or some betting syndicate sees them as consistently undervalued.

I’ve been aggressive in this category all year, so let’s try something new and go relatively conservative. Here are nine words sure to backfire: I don’t see how either of these teams lose. I think both their win probabilities are better than Circa’s market-low moneyline prices — Kansas City is -325 and Pittsburgh -275 — imply. The absence of Aaron Rodgers should be worth even more than the eight points the line has currently moved for Packers against the Chiefs. And the Steelers’ defense remains one of the best in the NFL; it’s hard to envision the Bears scoring more than two touchdowns maximum. The other two moneylines I like best and considered utilizing here are Cleveland and Philadelphia but I’ve got enough exposure with both those teams above. So let’s play it safe for once and get back to chasing bigger payouts next week.

Tennessee says its maintaining its identity as a run-first team even after the loss of Derrick Henry to injury, and there’s no reason not to believe it. To run the ball most effectively, it will need to rely more on the 25-year-old McNichols than the 36-year-old Adrian Peterson. The former, Boise State product is more than capable behind a bruising Titans’ offensive line. The Rams’ rush defense hasn’t been nearly as effective as its pass defense so McNichols is likely to find holes. I’d be surprised if he doesn’t get to at least 50 yards, let alone 32. Don’t forget to check the Raiders’ gameday preview section tomorrow morning for another prop bet.

Are the Hornets the surprise team of the NBA that won four of its first five games or the afterthought that’s plummeted with three straight, mostly noncompetitive losses? This line hints at the latter, but I think it’s somewhere in between. The Hornets are talented enough to sneak up on the best teams in the league on a good night and solid enough to beat anyone else at any time. The Clippers fall into the “anyone else” category. From a roster-strength perspective, they’re not any better than the Hornets, which should also be more accustomed to the west coast from a body-clock standpoint considering they’ve now been in California for nearly a week. The Kings and Warriors had otherworldly hot shooting nights against the Hornets in their last two games, and it’s unlikely they run into a third-straight avalanche. The Clippers should be a slightly smaller favorite here, something like -4.