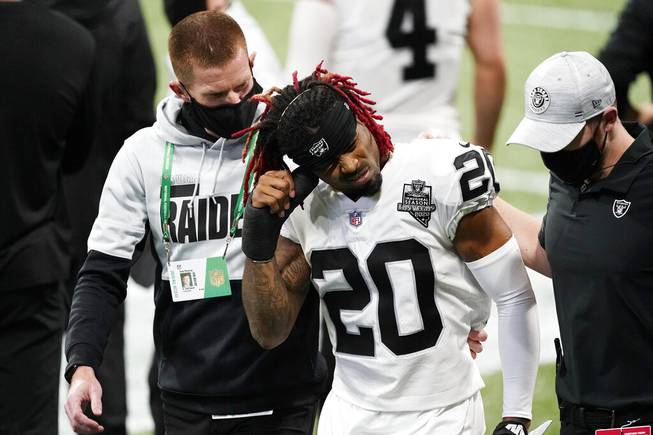 Las Vegas Raiders cornerback Damon Arnette (20) walks off the field after injury against the Atlanta Falcons during the first half of an NFL football game, Sunday, Nov. 29, 2020, in Atlanta.

The Raiders have now cut both of their first-round choices from the 2020 NFL Draft within a week.

Las Vegas was quick to release wide receiver Henry Ruggs III after his arrest following a fatal car crash last Tuesday and now have done the same with cornerback Damon Arnette, who was taken seven picks later. A video circulating on social media this weekend showed Arnette, who was on injured reserve, flaunting guns while threatening to kill someone who was messaging him.

Raiders general manager Mike Mayock announced the move on a conference call this morning, describing it as a “very painful decision.”

“We spent significant time, effort and resources trying to help in facets of his life,” Mayock said of Arnette. “There have been a series of bad decisions over the last year or so, but we cannot stand for the video of Damon with a gun, threatening to take a life. The content was unacceptable, contrary to our values and our owner Mark Davis has been very clear and very consistent that this is not how we will conduct ourselves in the community.”

Arnette had also recently been accused of a hit-and-run, and it apparently wasn’t an isolated incident. According to NFL Network’s Ian Rappaport, Arnette crashed four rental cars within a month last season.

Arnette was not considered a first-round pick going into last year’s draft, partly because of character concerns off the field that were well-known around the league from his time at Ohio State, according to Mayock. He said the Raiders only made the pick after digging more into Arnette’s background than any other player they had ever chosen under the general manager’s three-year watch.

“We spent an awful lot of time trying to understand his behavior and really what kind of tilted everything in the direction of, ‘O.K., let’s go ahead and draft him,’ was that we knew that coaching staff pretty well,” Mayock recalled. “We knew what they had asked him to do his last year at Ohio State. They felt very strongly that they knew who we had on our staff and that we’d be able to work with this young man and not only help him on the football field, but help him in his life. Obviously, in hindsight, we weren’t able to do it.”

Arnette won a starting job with a strong training camp heading into his rookie season but then had a “tough year” in Mayock’s words. He was unproductive on the field before suffering a thumb injury and testing positive for coronavirus.

His excessive social media presence also sometimes suggested he wasn’t taking the NFL’s strict pandemic policies during last year’s lockdown season seriously. Mayock hinted there were more issues than are being reported, as he said he unsure “what may or may not come out.”

Arnette lost his starting job this year but improved and became a key reserve before getting injured in a Week 4 loss to the Chargers.

Interim coach Rich Bisaccia declined comment on the hit-and-run allegation on Friday but did indicate Arnette was among a group of players on injured reserve the Raiders hoped to get back in two weeks for a home game against the Bengals. The death-threat, gun video started spreading the next day, ensuring Arnette’s time in the silver and black had come to an end.

“The bottom line, the Raiders will not tolerate this type of behavior,” Mayock said. “On a personal note, I’ve talked to Damon, his dad, a couple others in his life. From my perspective, he’s a very talented young man with a good heart. If he cleans up his life, I know he can make a living in the NFL. But not now with the Raiders.”

Raiders say mistakes, not emotions, led to loss in first game since tragedy