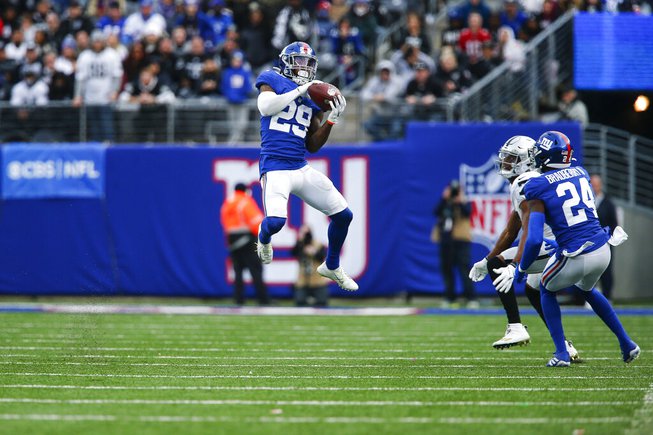 Raiders say mistakes, not emotions, led to loss in first game since tragedy

A folded brim on a black hat couldn’t cast a large enough shadow over Derek Carr’s face to conceal a frown at the end of the Raider quarterback’s postgame news conference Sunday evening at MetLife Stadium.

Frustrated certainly by his play in a 23-16 loss to the Giants and potentially by a line of questioning about his team’s response to this week’s tragedy allegedly caused by former teammate Henry Ruggs III, Carr made a request.

“It’s all about (taking care of) the ball — that’s why we lost. Please, just talk about me turning the ball over,” Carr said to the media while the Giants still celebrated their win about 10 yards away from the interview room on the field.

Carr committed three turnovers, including one that ended the game and another that proved the difference in it, as the Raiders lost in the first contest out of their bye week for the fifth consecutive year. But this one seemed different than the previous seasons’ defeats considering the circumstances.

The Raiders were playing with the weight of the situation that saw Ruggs, their leading receiver on the year, charged with several counts including DUI and reckless driving after a fatal crash that killed a woman Tuesday morning. And, whether it was ultimately a factor or not, the Raiders didn’t play as well as they’ve become accustomed to this season in the first game since the devastating event.

They had minimized mistakes and overpowered two straight opponents, the Broncos and Eagles, but made a number of gaffes and weren’t physically dominant against the Giants.

“We come out, fight at the end, get a touchdown and win the game, we’re talking about different stuff,” Carr said. “Certain emotions and all that kind of stuff, at the end of the day, we’re football players. We play football. You just can’t turn it over.”

The Raiders were in good position at halftime, leading 13-10 despite a fairly even start to the game, before Carr’s first interception on the opening drive of the second half. He thew a pass behind Hunter Renfrow that Giants safety Xavier McKinney picked off and returned 40 yards for a touchdown.

McKinney — a former college teammate of Ruggs’ at Alabama who said he had a “tough week” and prayed for both the victim’s family and his friend — intercepted Carr again late in the fourth quarter. Carr was looking for Jones down the sideline and again underthrew his receiver.

That allowed the Giants to burn some clock and add a field goal to go up a touchdown. Raiders coach Rich Bisaccia maintained the same message as Carr, emphasizing that turnovers were the culprits of the loss — not distractions.

“We’ve all been emotionally impacted by what happened in that particular situation, but again, as the week on, I felt like the men that were in that locker room right now collectively and individually — what they do best is play football and I feel like they came here today and they played football and they played it well,” he said. “We just didn’t execute to the point that we have been the last two weeks or the place we’d like to.”

Apart from the turnovers, the Raiders’ offense played well. They were much more efficient than the Giants, racking up a 403-235 total yardage edge and 6.0-4.5 yard per play advantage, and marched right back down the field in their final possession after Carr’s second interception.

Las Vegas got into the red zone on a pass to Darren Waller — who led the team with seven receptions for 92 yards — but another target to the star tight end proved its undoing. Carr dropped back from the 13-yard line with 50 seconds remaining and thought he could get the ball to Waller in the corner of the end zone.

But before Carr released it, Giants rookie edge rusher Quincy Roche hit him from his blindside and forced a fumble that veteran defensive lineman Leonard Williams recovered.

Neither Bisaccia nor Carr’s teammates let him take blame for the loss alone. The defense played well but extended a couple scoring drives with penalties that Bisaccia lamented.

Edge rusher Yannick Ngakoue kept up his tear and looked like the team’s best player with a pair of sacks, including one that forced a fumble the Raiders recovered in the second quarter, but even had his own regrets. He wished he could have done more on the Giants’ opening drive, which culminated with a 30-yard score from Daniel Jones to Evan Engram — the only touchdown by the New York offense on the day.

Ruggs’ absence was undoubtedly discernible from a football perspective. Bisaccia pointed out a lack of explosive plays as one of the biggest reasons for the loss, and Ruggs had been the Raiders’ biggest provider of explosive plays on the year.

In Ruggs’ vacated starting spot, Jones managed only one catch for 20 yards. In search of adding a top-line speed, big-play element back to its offense, Las Vegas signed released Rams receiver DeSean Jackson after the game according to an NFL Network report.

Perhaps the veteran will help stabilize a suddenly-thin Raiders’ receiving corps. For now, the team admits it’s still grappling with the loss of life and adjusting to playing without Ruggs even if the tragedy didn’t directly contribute to the loss.

“It is shocking,” Waller said. “It does hurt a little bit, but we all can do is do the best we can to move forward and focus on football. Nobody asked for this, but at the same time, as far as adversity, I feel like we’re getting the best practice, training possible.”