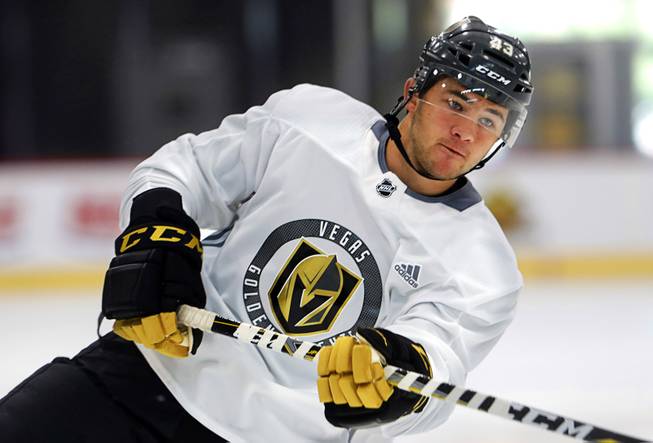 Paul Cotter (43) is shown during the first day of the Vegas Golden Knights’ rookie camp at City National Arena in Summerlin Friday, Sept. 6, 2019.

When the Vegas Golden Knights’ Paul Cotter saw his name on the lineup card this morning for the first time in his NHL career, he excitedly rushed to call his parents and give them the news. There was just one problem.

“I guess parents find out before the players nowadays,” he said with a smirk.

Cotter will make his league debut tonight, becoming the fifth Golden Knight to play his first game this season. A 21-year-old forward, Cotter will look to make his impact on an injury-depleted Vegas squad when the team hosts the Seattle Kraken at 7 p.m. at T-Mobile Arena.

The game will be streamed exclusively on ESPN+/Hulu with no local blackout. It will not be televised.

“I’m going to try and treat it like every other day, but in the back of my head, it’s always going to be my first NHL game,” Cotter said. “I don’t know if there’s too much preparing to do. I’ve been in the organization; I know the system; I know the coaches, so I think it’s more of what I’m expected to do.”

That Cotter is the fifth rookie to play his first game is a statement on where the Golden Knights are as a team. They’ve been decimated by injuries, as key forwards Mark Stone, Max Pacioretty, William Karlsson and the newly acquired Jack Eichel are all out long-term. Only nine players have appeared in every game this season.

Naturally, the Golden Knights aren’t where they want to be in the standings. They’re 6-6-0, out of a playoff spot for now and have yet to reach even two games above .500 this season. But they’re not out of the race, a testament to finding ways to win games and stay relevant in the postseason hunt while some of their best players heal.

“It’s nice to be able to see them (but) if I had my preference, I think I’d rather see them in a different situation or one a month,” coach Pete DeBoer said of the young players debuting. “We are keeping our head above water so far.”

Now is a good time for the Golden Knights to make a push. Tonight, they welcome the last-place Kraken, who have just one road victory in seven tries this season and lost in Vegas on opening night last month. It’s also a battle of struggling power plays: Seattle has the worst-ranked unit with a 7.9% success rate, and Vegas is the next-worst at 8.3%.

It’s the start of a six-game homestand for the Golden Knights, tied for their longest of the season. They just finished a two-win, two-loss road trip and are looking to surge in the Pacific Division with a couple of victories at T-Mobile Arena this week and next.

“We talked about that. We’re not happy being around .500,” DeBoer said. “We want to separate ourselves from the group here a little bit. We don’t want to be happy just winning one, losing one.”