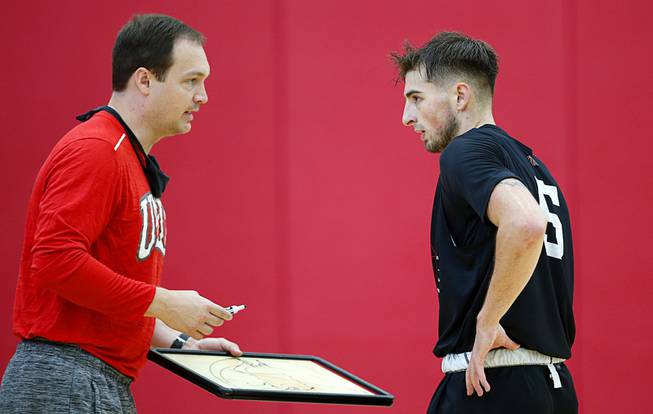 It’s time for another season of UNLV basketball, and for the third time in six years the program is undergoing a complete rebuild.

When the season opens today against Gardner-Webb (7 p.m., Mountain West Network), things are going to look completely different than the last time the scarlet and gray took the floor. Your new head coach? Kevin Kruger. Your new roster: Composed of 10 newcomers. Your new team identity: Defense and toughness.

How it all comes together? It’s anyone’s guess.

1. Who will be UNLV’s leading scorer? Bryce Hamilton, 15.9 points per game.

2. Will Bryce Hamilton shoot 45 percent? Yes. Hamilton has been a volume scorer at UNLV, having only cracked this milestone once in his three collegiate seasons (45.3% in 2019-20). But an improved outside stroke will allow him to bump his accuracy to the 47% range as a senior.

5. Will UNLV defeat a ranked team? Yes. The scarlet and gray will have several chances to score a quality upset; Michigan and UCLA will be Top-10 teams and San Diego State will likely break into the rankings at some point this season. UNLV won’t beat any of them, however; their win over a ranked team will come when they defeat Colorado State at home on Feb. 19.

7. What will be the longest losing streak? Two games (three times).

8. Which newcomer will have the biggest impact? Mike Nuga. The Kent State transfer is coming off an ACL injury that ended his 2020-21 season, but at practice on Tuesday he declared himself 100% healthy with no restrictions. And Nuga has performed well in intrasquad action, flashing a strong ability to get to the basket and a nice shooting touch. Look for the 6-foot-2 guard to be a key contributor.

9. Will Kevin Kruger get a technical foul? No.

10. Will the 3-point streak survive the season? Yes.

11. Who will lead the team in dunks? Royce Hamm. The 6-foot-9 transfer from Texas will have competition, however. Unlike last year’s team, which was quite unathletic, this squad has plenty of players who can get above the rim, like junior wing Donovan Williams, junior forward Victor Iwuakor and Nuga.

12. Will UNLV beat UNR? Yes. UNLV hasn’t beaten its in-state rival since 2018, when Jovan Mooring led them to an 86-78 win in Reno. The Wolf Pack have claimed eight straight in the series since then, but UNLV will end that streak with a road win on Feb. 22.

13. Which team will finish the season with a higher KenPom rating, UNLV or Iowa State? Iowa State. UNLV fans would love to outpace former coach T.J. Otzelberger after the way he jumped ship to Iowa State in the offseason, but it’s not going to happen this year. UNLV opens the season ranked No. 130 by KenPom.com, while Iowa State is No. 112. ISU’s schedule is tougher, with more opportunity to rise.

16. What home game will have the highest attendance? vs. UCLA (Nov. 27, Thomas & Mack Center). Not only will the Bruins be a draw due to geographical and historical reasons, they’ll also be ranked in the Top 10. Oh, and UNLV legend Freddie Banks will have his jersey retired that night. Expect a lively crowd at the Mack.

19. Will UNLV finish in the top half of the conference in offensive efficiency? No.

20. Will UNLV finish in the top half of the conference in defensive efficiency? Yes.

22. What will be the season high single scorer? 35 points, Bryce Hamilton at Utah State (Feb. 5).

23. What will be the starting five on opening night? Marvin Coleman, Mike Nuga, Bryce Hamilton, Donovan Williams, Royce Hamm. Nuga, Hamilton and Hamm are locks to start and figure to be cornerstone players. Coleman gets the nod at point guard because he brings the best blend of leadership, shooting and defense. At forward, Williams starts because Victor Iwuakor is likely out due to a shoulder injury. Expect the lineups to be fluid for the first month of the season.

24. Where will UNLV finish in the Mountain West standings? Fourth place (12-6 record in conference).

26. Will Keshon Gilbert win Mountain West Freshman of the Year? No. Gilbert claimed this honor in the preseason poll, and by all indications he has had a strong preseason. He’ll earn minutes due to his defensive toughness, but voters tend to put more emphasis on scoring and offensive contributions. Gilbert won’t average double figures, which will cost him FOTY even if he has a nice debut campaign.

28. How many starting lineups will UNLV use? Nine.

29. Will UNLV add any high school recruits during the season? No. UNLV has one commitment from the Class of 2022 in Texas swingman KyeRon Lindsay and that’s going to be the extent of their recruiting efforts this year. Kruger will wait until after the season and focus on building his team through the transfer portal.

32. Which player is in line for a breakout season? Donovan Williams. The 6-foot-7 wing is oozing with potential, but his shooting percentages and overall raw skill set kept him from earning consistent minutes at Texas. If nothing else, this UNLV coaching staff will turn him into a disruptive defender and scary transition threat.

34. Will UNLV get swept by any conference opponents? Yes, San Diego State.

35. Will a UNLV player be named to the All-Mountain West First Team? Yes, Bryce Hamilton.

37. Who will lead the team in double-doubles? Bryce Hamilton, six.

College football by the odds: Vegas preview and picks of every Week 11 game