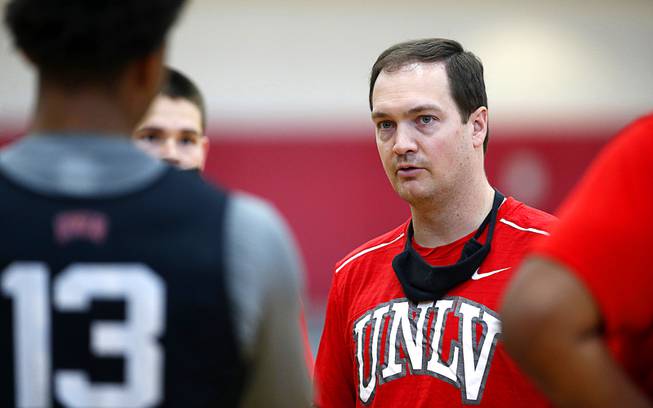 UNLV basketball tips off the 2021-22 season today with a home game against Gardner-Webb, and it’s (yet another) new beginning for the program.

A look at what to watch as Kevin Kruger’s scarlet and gray take the court for the first time:

After an accomplished collegiate playing career, a six-year pro career and seven years as an assistant coach, Kevin Kruger is raring to lead UNLV onto the court tonight in his first game as a head coach.

Along with that excitement are sure to come some nerves. Kruger had a couple closed scrimmages to work out some of the kinks, but he expects some anxiety early on as he gains his bearings on the sideline.

“I’d be lying if I wasn’t probably a little nervous,” Kruger said. “The first time you ever do something with that responsibility, it’s going to be unique.”

Kruger said he’s never been more nervous than he was when watching his father, Lon Kruger, coach in big games.

“As long as it doesn’t reach that level, we’ll be OK,” Kruger said. “I’m just really looking forward to something I’ve wanted to do since I can remember. Hopefully we put them in the right spots and we give them the ball in the right situations and we get a win.”

We still don’t know what style of play UNLV is going to employ under Kruger in terms of X’s and O’s, but it’s a pretty safe bet that defense will be the foundation.

Kruger imported a bunch of defensive-minded players over the offseason and spent the last month of practice preaching the gospel of stops. He even went so far as to torture his players with a continuous loop of a Will Smith song in order to prompt his guys to “Switch” properly.

That attitude has even permeated Bryce Hamilton, who has been a pretty offensive-minded player his first three years at UNLV.

After practice at the Thomas & Mack Center on Tuesday, Hamilton was asked what he thinks will be the strength of this UNLV team. Kruger surely approved of his answer.

“Defense,” Hamilton said. “That’s something that we really take pride in and I think we’re going to be a real good defensive team.”

Hamilton sounds like a true convert, saying he put in the work over the offseason to become a better individual defender.

“Just mentality, really,” Hamilton said of his focus on the defensive end. “More of me taking that pride in playing defense. That’s something I’ve really been focusing on this summer and that’s something I’m ready to do.”

It sounds like the scarlet and gray have bought into the defense-first message. A strong showing at that end against Gardner-Webb would drive home the message even more.

One of the most intriguing position battles during practice has been at point guard. Returning senior Marvin Coleman opened last year as the starter but missed most of the season due to injury. Kruger brought in senior transfer Jordan McCabe to shore up the position, and new recruit Keshon Gilbert was named Mountain West Preseason Freshman of the Year, so there are options.

We won’t know who has emerged as UNLV’s primary playmaker until the lineup is announced on Wednesday.

And no matter who gets the nod in the starting lineup, there’s a chance it might not matter so much. Kruger could always opt to play with multiple wings and big men, eschewing a “true” point guard, something that could be intriguing from a defensive standpoint.

Nuga, one of the team’s primary wings, said he and his fellow swingmen teammates are capable of running the offense if there’s no point guard on the floor.

“We work on that in practice,” Nuga said. “Different people bringing up the ball and getting used to running the offense. We’re prepared for that. If we go without a true point guard, we’re prepared to move around with each other and play off each other.”

College football by the odds: Vegas preview and picks of every Week 11 game