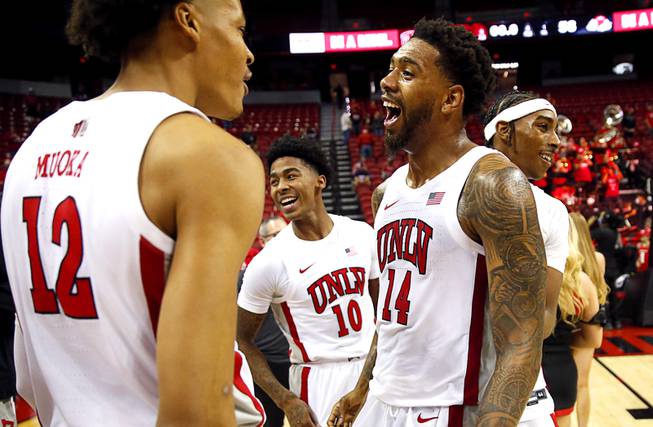 UNLV opened its season with a closer-than-expected 64-58 win over Gardner-Webb on Wednesday at the Thomas & Mack Center, earning a victory in the first game of Kevin Kruger’s tenure as head coach.

It wasn’t beautifully played, but after an offseason of the unknown, those 40 ugly minutes gave us a better understanding of the 2021-22 scarlet and gray.

The defense is tough

New head coach Kevin Kruger went about restocking the roster with defensive-minded players in the offseason, and then the coaching staff spent the preseason drilling that end of the court. It paid off on Wednesday, as UNLV held Gardner-Webb to 38.1% from the field and 3-of-20 from 3-point range.

Royce Hamm was the man in the middle, as the 6-foot-9 center grabbed 17 rebounds, blocked four shots and discouraged several others. As a team, UNLV forced 16 turnovers.

And UNLV needed every bit of that defensive effort on a night when shots weren’t falling for the home team.

After the game, leading scorer Bryce Hamilton seemed more excited to talk about the team’s defensive performance than his own offensive exploits.

“We take pride in our defense,” Hamilton said. “We have the athleticism and the experience to play great defense. Even though we played terrible on the offensive end, we found a way to win. That shows how good of a team we can be.”

Expect UNLV to continue to lean on its defense as they use the early part of the schedule to find an offensive rhythm.

“This is a great example that we go out there and play with the mindset of keeping them from scoring, even if we’re not making [shots],” Kruger said.

Bryce Hamilton can get hot

Hamilton had a rough start to his senior season. He missed 16 of his first 20 shots and seemingly couldn’t buy a bucket — until winning time.

With the game tied, 51-51, with 4:20 on the clock, Hamilton pulled up and nailed a mid-range jumper to give UNLV the lead. He followed up on the next possession by driving and earning two free throws, which he made.

Then, coming out of a timeout, Kruger drew up a play to get Hamilton free on the right wing for a 3-pointer — despite the fact that he was 0-of-8 from long distance.

Hamilton drilled the triple to give UNLV a 58-51 lead, then scored a layup on the ensuing possession. His nine straight points gave UNLV some breathing room and ultimately decided the game.

Hamilton said his slow start didn’t dent his confidence with the game on the line.

“Just staying confident,” Hamilton said. “My teammates give me that confidence every day, they tell me, ‘Keep shooting, keep shooting.’ I put in the work too, so I trust my work.”

Hamilton finished with a game-high 22 points on 8-of-25 shooting.

Much like Hamilton maintained his confidence level, Kruger never wavered when it came time to draw up that 3-point shot for his star scorer.

“We talked as a staff about what we wanted to run and we came to the conclusion that we’re going to go through him,” Kruger said. “Night in and night out we’re going to put a lot of the offensive responsibility on his shoulders. And we sat down in the huddle, asked him if he was going to make the shot, he said, ‘Yeah,’ so we ran one for him.

UNLV is committed to putting the ball in Hamilton’s hands at the most important moments.

“We’re going to go through Bryce.”

Royce Hamm is a stud

Royce Hamm didn’t get much of an opportunity to showcase his skill set at Texas, as he spent four years backing up an assembly line of future NBA centers. But now he’s getting a chance to play extended minutes, and he came through in a big way on opening night.

Needless to say, if he can keep up that level of play — if not the box-score production — UNLV will be formidable in the paint.

“I definitely want to try to keep being consistent, doing whatever it takes, whatever the team needs me to do to win,” Hamm said.

Hamilton believes Hamm can deliver on a nightly basis.

“He’s amazing,” Hamilton said. “Royce works hard. He’s probably one of our hardest workers on the team. We expect that from Royce. He does that every single day, so that’s not a big surprise to us. Royce is going to keep doing it.”

The offense is a work in progress

Some of the offensive struggles can be blamed on cold shooting. Guards Mike Nuga, Josh Baker and Justin Webster combined to shoot 0-of-12 from the field and 0-of-9 from 3-point range, and their track records indicate they’ll heat up significantly.

After the game, Kruger took some of the blame for working his players harder on the defensive end in practice.

“Offensively, we’ll take this one as a staff because we didn’t maybe put as much emphasis on the offensive side of the ball until a little more recently because we felt we could really make an imprint with this team defensively,” Kruger said. “As they continue to play together and start to learn each other’s instincts and movements, I think the offense will just get better.”

It was an ugly game, but the offense should get better.

Kruger expected to be nervous for his first game as a head coach, and after the game he admitted to some nerves in the early going.

The biggest change from being an assistant? Making the final decision, Kruger said.

“There’s definitely some differences,” Kruger said. “When they’re going on that run there’s a little different feel, because you’re thinking do we take a timeout now? Do we wait to see what happens? Do we make a substitution? Do we have the right people on the floor? And you know that you’re the final decision-maker on those, so it’s a little different.”

Kruger eventually settled in, and his players seemed to draw from his level-headed approach on the sideline.

The result? A 1-0 record and good reviews from his team.

“He did a good job,” Hamilton said. “I’m happy that we were able to get a win for him in his very first game.”

DeSean Jackson: ‘I’m not asking to get the ball 100 times’ with the Raiders