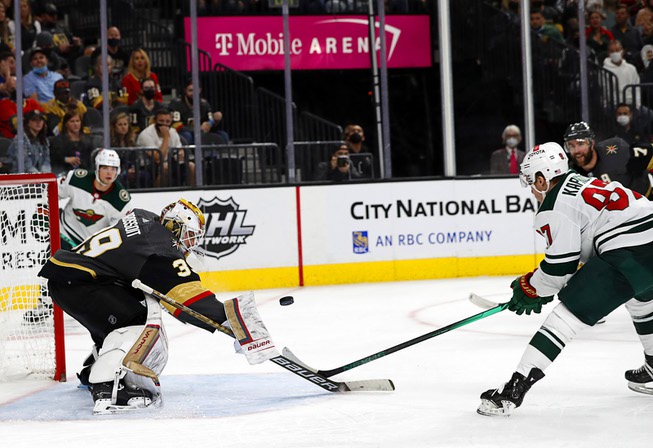 The Golden Knights stared down their biggest test of the game in the second period and didn’t blink. Facing nearly two full minutes of a 5-on-3 penalty kill, Vegas didn’t allow the Minnesota Wild back into the game, and added a goal of their own to take a 2-0 lead after two periods at T-Mobile Arena on Thursday.

Vegas took three penalties in the span of 2:08. Shea Theodore went off for hooking, then as his penalty was about to expire Nicolas Hague flipped the puck over the glass and gave Minnesota 13 seconds of a two-man advantage. But when Alex Pietrangelo also sent the puck into the stands, the Wild had 1:39 of a 5-on-3 power play.

The Golden knights killed it off, allowing just three shots to reach Laurent Brossoit with most of the attempts coming from the outside. Brossoit had the best save of the game on Minnesota’s best chance, turning away Joel Eriksson Ek from in close.

As a reward for their penalty-killing prowess, the Golden Knights extended their lead with seven seconds to go in the period. Reilly Smith made a nice turnover in the neutral zone, then made an even nicer play to slide the puck over to Jonathan Marchessault through traffic. Marchessault didn’t miss, burying his team-best seventh of the season and giving Vegas a 3-0 advantage.

The Golden knights led 25-19 in shots on goal through two periods.

Defenseman Alec Martinez, who left the game in the first period after catching a skate blade to the face, did not return for the second period and appears done for the night

The first period was full of firsts for the Golden Knights, as two players netted the first goals of their NHL careers. Paul Cotter and Jonas Rondbjerg both had a period to remember, and Vegas led the Minnesota Wild 2-0 at T-Mobile Arena on Thursday.

Cotter, playing in his second NHL game, went first. He took an outlet pass from Nicolas Hague and turned on the jets, speeding down the right wing and around Minnesota defenseman Dmitry Kulikov. He went backhand, forehand then sniped, beating Cam Talbot clean and putting the Golden Knights up 1-0 at 6:08. It was his first NHL goal.

The Golden Knights spent much of the period in control, firing six of the first seven shots of the game and keeping Minnesota out of the dangerous areas. The Wild had one especially dangerous chance off the rush, but Laurent Brossoit made the first stop and Kirill Kaprizov fanned on a dribbler through the crease that would have tied the game.

Vegas even had the best look on Minnesota’s power play, as Reilly Smith sprung loose for a partial breakaway. He went five-hole on Talbot, but Minnesota’s goalie got just enough pad on it to deflect it away and allow Jonas Brodin to clear it harmlessly.

Before the period came to an end, Rondbjerg got in on the fun. He came down the right wing like Cotter did, and from nearly the same spot on the ice ripped it by Talbot at 16:41. It was the first goal, and third point of his career after assisting on Cotter’s goal.

Tonight will be just the Golden Knights’ 14th game of the season, but after facing the Minnesota Wild they will have faced all three of last year’s postseason opponents.

After defeating the Colorado Avalanche (second round) on Oct. 26 and the Montreal Canadiens (semifinal) on Saturday, Vegas welcomes last year’s first-round opponent for a 7 p.m. game at T-Mobile Arena. Vegas remembers the Game 7 victory last May, but so do the Wild, and the Golden Knights will look to avoid any sort of revenge game.

“They showed also from the start of the season who they are, I think, as a team. It’s going to be a tough battle,” forward Jonathan Marchessault said. “I think they’re well balanced everywhere throughout their lineup, they’re a heavy team and we’ve got to be ready for them.”

The Wild last season took a major step in their competitive window and haven’t slowed down at the start of the season. At 9-3-0, they lead the Central Division and are tied for the most points in the Western Conference. They have won four in a row and are coming off a victory last night in Arizona.

The usual suspects are producing points for Minnesota. Last year’s Calder Trophy winner as rookie of the the Years Kirill Kaprizov leads the squad with 10 points, while Matt Dumba, Mats Zuccarello and Marcus Foligno are right behind with nine each. Minnesota has scored 3.42 goals per game, tied for six in the league.

“Same identity. Big, heavy, hard to play against, four lines,” coach Pete DeBoer said. “They made that big trade in the offseason (buying out Zach Parise and Ryan Suter) and I think everyone thought, well are they going to take a step back? I think it’s kind of been the opposite when you look at them on tape. They look really good.”

The Golden Knights enter the game down yet another forward, as William Carrier did not participate in morning skate and will miss tonight’s game. The third and fourth lines are expected to consist of Mattias Janmark, Jake Leschyshyn, Michael Amadio, Paul Cotter, Brett Howden and Paul Cotter, who which only two — Janmark and Howden — started the season on Vegas’ NHL roster Only one of those played in last year’s postseason series, and Janmark had a hat trick in the decisive Game 7.

The Golden Knights have won six of their last eight games, and a victory could return the to a postseason position, based on how the other games this evening shake out.

Robin Lehner is expected to start in goal for the Golden Knights. He has started 11 of the 13 games this season, and has a .919 save percentage.