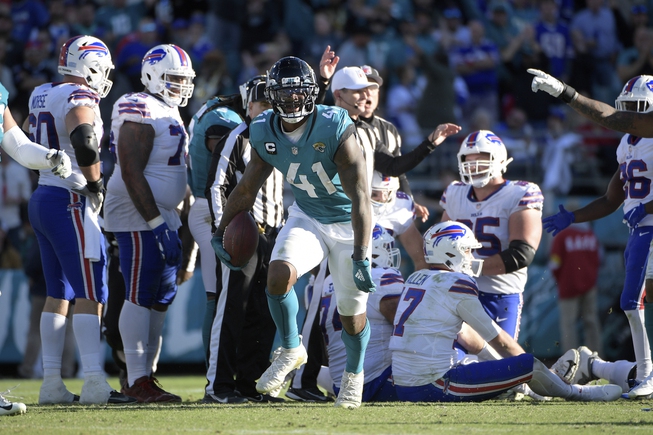 Jacksonville Jaguars outside linebacker Josh Allen (41) celebrates after recovering a fumble on a sack of Buffalo Bills quarterback Josh Allen (17) during the second half of an NFL football game, Sunday, Nov. 7, 2021, in Jacksonville, Fla.

So much for the whole talking point about the gap between the worst teams and the best teams in the NFL having never been wider.

That was a narrative over the last few weeks as the season neared its midway point without a single big upset. But for the first time in nearly 11 months — since the winless Jets shocked the Rams in Week 16 last year — an underdog of more than two touchdowns prevailed in Week 9.

The Jacksonville Jaguars beat the Buffalo Bills 9-6 as 14.5-point underdogs to resurrect the “any given Sunday” mantra. As if that wasn’t enough, the Broncos clobbered the Cowboys 30-16 while getting 10 points on the spread for a pair of double-digit underdogs winning outright on the same day.

It was quite the change from just two weeks prior, as before the Jets’ Week 8 upset of the Bengals, there hadn’t been an underdog of more than 7 points emerge victorious all season.

Will the craziness continue in Week 10? Let’s try to find out while building on the last week’s success of the plays (3-1) and trying to bounce back from a poor overall performance (6-8) to bring the season record picking every game against the spread to 69-66-1.

Read below for picks on every Week 9 game. Picks are separated into three confidence categories and listed in rough order of confidence. Lines are the best currently available in Las Vegas on the chosen side.

Seattle Seahawks +3.5 at Green Bay Packers The rest of the Seahawks’ team has improved in the absence of quarterback Russell Wilson, who’s now expected to return, while there’s still uncertainty regarding the status of Packers counterpart Aaron Rodgers. Best-case scenario, Rodgers gets cleared Saturday and returns with no practice. That made Seahawks +6 earlier in the week one of the best bets of the year, and though that number is long gone, they’re still playable to +3.

Tampa Bay Buccaneers -9.5 at Washington Football Team Last year’s playoff game between these two teams featured a closing number of Tampa Bay -10, which felt fair considering the 30-22 final score. The Buccaneers have been better this year than they were entering the playoffs last year, and the Football Team has been worse, so there’s no reason the line should be even a half-point lower.

New Orleans Saints +3 at Tennessee Titans The Saints continue to have a statistical profile — they rank in the NFL’s top 10 by both Football Outsiders’ DVOA and net EPA (expected points added) per play — that’s much better than conventional wisdom dictates. The Titans continue to have a statistical profile — ranking just outside the top 10 in both aforementioned measures — that’s much worse than conventional wisdom dictates.

San Francisco 49ers +4 vs. Los Angeles Rams Making one last attempt to buy low on the 49ers, which have deserved better results than the 3-5 record they’ve compiled this season. San Francisco is at 5.2 expected wins based on Football Outsiders’ efficiency metrics despite facing one of the toughest schedules in the league so far.

Buffalo Bills -11.5 at New York Jets The Bills’ offense is innately a high-variance unit, largely given quarterback Josh Allen’s intermittent accuracy issues, so resist the urge to put too much into the loss to the Jaguars. It would be no surprise if Allen bounces back a week later by being on point with his deep ball and the Bills light up the scoreboard against a Jets’ defense ranked dead-last in the league by DVOA.

Dallas Cowboys -9 vs. Atlanta Falcons Atlanta is 4-2 in games decided by a touchdown or less, including 3-1 in games decided by less than six points, meaning a lot of good fortune has gone its way to stay in the wild-card race. The Falcons are still one of the weaker teams in the league, and despite the Cowboys’ ugly 30-16 loss to the Broncos as 10-point favorites, they’re one of the best.

Las Vegas Raiders +3 vs. Kansas City Chiefs Anything below 3 — and Kansas City -2.5 is the more widely available price — would relegate this to a guess. The Chiefs, specifically their offense, may yet wake up and rediscover their greatness, but over the last month, there’s no disputing that the Raiders have been the more efficient and even more explosive team.

Denver Broncos -2.5 vs. Philadelphia Eagles This spread makes perfect sense based solely on both teams’ efficiencies so far, but Denver may still deserve a little extra boost for home-field advantage at elevation. The pick is much trickier at -3, so it would be wise to grab one of the couple remaining -2.5s while they’re available.

Baltimore Ravens -7.5 at Miami Dolphins The number looks exactly right, but it’s hard not to give the Ravens the benefit of the doubt in a plus matchup. Ravens quarterback Lamar Jackson threw for 324 yards and five touchdowns in a 59-10 win in his only career meeting against the Dolphins two years ago, and the home team’s defense, particularly in the secondary, isn’t all that different now.

Jacksonville Jaguars +10.5 at Indianapolis Colts The lookahead line on this game was an identical Indianapolis -10.5, meaning Jacksonville got no positive adjustment for its upset of the Bills. The victory may have merited at least a half-point.

Carolina Panthers +10.5 at Arizona Cardinals Last week’s line moved as much as 8.5 points away from the Cardinals as it became apparent that Colt McCoy would start at quarterback for the injured Kyler Murray. A lot went Arizona’s way to ensure a 31-17 victory over San Francisco including recovering all three of the game’s fumbles. The fact that there’s still little clarity on Murray’s status and the line is moving in Arizona’s favor this week might be an overreaction to a one-game sample.

New England Patriots -1.5 vs. Cleveland Browns This line opened at New England -2.5, and though a one-point move to -1.5 is usually insignificant, the initial price was more accurate in this situation. Cleveland’s offense has struggled against the top defenses its faced — namely Arizona and Pittsburgh — and New England might have the best one it’s seen so far this season.

Pittsburgh Steelers -8.5 vs. Detroit Lions Pittsburgh had an awful performance on Monday Night Football, getting outgained by 3 yards per play in a controversial 29-27 win over Chicago as 7-point favorites, but that’s making for a value price this week. If the Steelers maintained their 10-point fourth quarter and cruised to a victory, this number would likely be at 10.

Los Angeles Chargers -3 vs. Minnesota Vikings There’s not a single team-strength advanced metric that would paint the Chargers as a better team than the Vikings, but there’s also no quantifying the extent of the coaching edge between Brandon Staley and Mike Zimmer. The Vikings are also traveling to the west coast as part of back-to-back road games, a situation where NFL teams traditionally struggle.

DeSean Jackson: ‘I’m not asking to get the ball 100 times’ with the Raiders