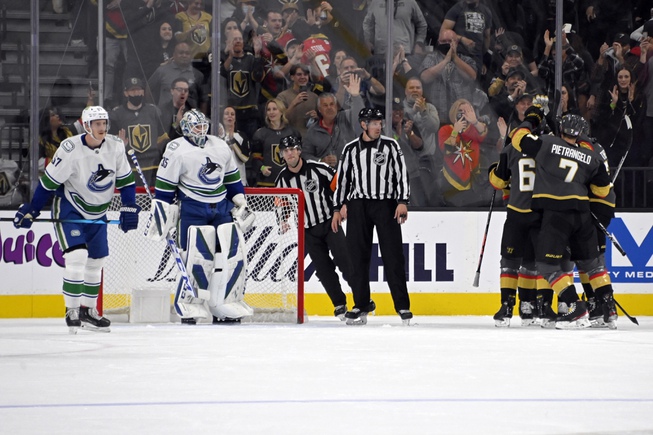 Marchessault on 100th Vegas goal, ‘VGK is the pride of my career’

The Vegas Golden Knights celebrate a goal against the Vancouver Canucks during the first period of an NHL hockey game Saturday, Nov. 13, 2021, in Las Vegas. (AP Photo/David Becker)

There are few players who mean more to the Golden Knights, or who embody the ethos they try to exude, than Jonathan Marchessault.

The brash and exuberant winger is one a handful of original Golden Knights left, who time and time again over the last five years has scored big goals to win games. He had another noteworthy goal on Saturday, scoring his 100th regular season goal for Vegas in the third period of a 7-4 victory against the Vancouver Canucks at T-Mobile Arena.

For good measure, he later added on his 101st goal.

“VGK is the pride of my career,” Marchessault said. “Obviously I want to always be here and work hard and win with that team and that franchise. That’s my main goal and I’m going to keep pushing toward that.”

It wasn’t long during the inaugural year of 2017-18 before Marchessault became one of the Golden Knights’ on-ice leaders is posting a career best 75 points. While he hasn’t hit that total again, he has been one of Vegas’ most consistent performers — no one has more goals (101), assists (137), points (238) or games played (295) with the Golden Knights.

Marchessault was hardly a household name before arriving in Vegas, which was his fourth organization in five years. He was coming off a 30-goal season with the Panthers, but even they were happy to give him away, as Columbus and Tampa Bay did before them.

“He’s a character. Everyone loves him in the room,” said inaugural year teammate Brayden McNabb. “He brings that energy to the team that it’s hard to find out there. It’s great to see him get rewarded so far.”

Coach Pete DeBoer applauded not just the quantity of Marchessault’s goals, but also the quality. He recalled the game-tying goal with 62 seconds left in Dallas last month, and even further back in Game 7 of the 2018 playoffs when Marchessault’s goal sent the game against DeBoer’s Sharks to overtime.

“Out of that 100 I’ve stood behind the Vegas bench and seen quite a few of them and I feel like I saw the rest in San Jose when I was there,” DeBoer said. “He’s been a big-time guy here right from Day 1.”

Coaches, veteran teammates, rookies — everyone seems to have something to say about Marchessault. First-year forward Paul Cotter said this week it was Marchessault who “roasted” him for wearing a fedora into the locker room, and Jake Leschyshyn said he admires him now that he’s here.

It was also a special night for Leschyshyn, who scored the first goal of his NHL career. He was drafted in 2017, about a week after Marchessault was taken in the expansion draft. Now that they’re teammates, Leschyshyn sees first-hand what Marchessault means to Vegas.

“He’s a leader on this team. On and off the ice he’s a guy that everyone looks up to,” Leschyshyn said. “He performs every night. He’s huge for this team. He’s been here from the start and he’s been a big piece, and a big, big piece going forward.”

Marchessault has been a major reason why the Golden Knights have a 9-6-0 record, surviving injuries to player after player. Mark Stone, Max Pacioretty and William Karlsson have all missed long stretches, and though Stone returned Saturday, the onus has fallen on other players to step up.

Enter Marchessault, whose two goals against the Canucks gave him a team-best nine on the season, a total that ranks sixth in the league. He has seven goals in his last six games, all but one of which were victories.

“I take a lot of pride in playing for the Golden Knights and being here since Day 1, and working hard every night trying to help my teammates win a hockey game,” he said.