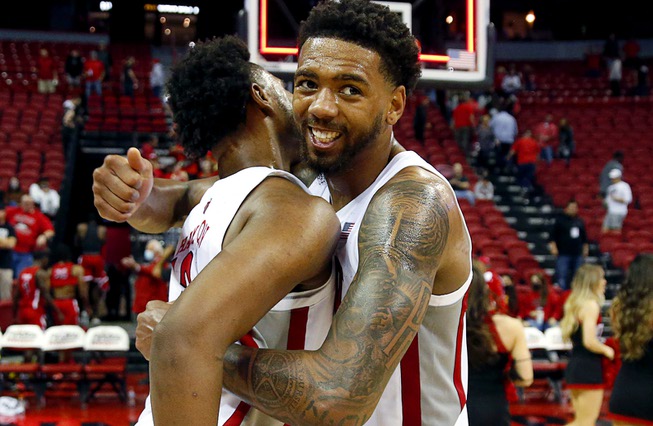 If you are looking for signs that the UNLV basketball program is heading the right direction, Saturday’s hard-fought 55-52 win against visiting Cal should provide plenty of evidence.

The Rebels connected on 10 of 29 attempts from 3-point range, a significant improvement from the 2 for 25 effort earlier in week against Gardner-Webb in the season opener.

They had 14 assists against Cal, or nine more than in the six-point victory against Gardner-Webb that featured too much individual play and — of course — poor shooting.

UNLV played lights out defense, like Royce Hamm soaring high to block a shot from Cal’s Jordan Shepherd near the basket with 26 seconds remaining to preserve a one-point lead and help the Rebels only surrender two points in the final 2:30. Earlier in the game, it was freshman guard Keshon Gilbert disrupting the Cal offense with pressure defense near midcourt.

“Keshon Gilbert just goes in and changes the flow of the game,” UNLV coach Kevin Kruger said. “It’s fun to watch. He plays hard and the city is going to love him – he just plays basketball the way it’s supposed to be played.”

UNLV also didn’t flinch in the final minute with the game in question, as Jordan McCabe calmly drained a pair of free throws with 12 seconds remaining to extend the advantage. Bryce Hamilton came up with a steal on Cal’s ensuing possession to seal the victory and a 2-0 start to the UNLV season.

Was the win a thing of beauty? Absolutely not, especially an 11-0 scoring run by Cal in the second half. But, without question, it was a step in the right direction.

“We are just really proud of the team,” Kruger said. “There were a number of times where things could have gone the other way, but we just continued to fight and battle.”

Remember, this is a team with 10 transfers who until earlier in the week had never played a game together. It’s going to take time to get everyone on the same page.

Take Hamilton, the most team’s most tenured player.

The senior was UNLV’s leading scorer with 12 points, including five straight points with less than four minutes remaining to put the Rebels ahead for good. But on the play before the scoring streak started, Hamilton got caught trying to dribble through the Cal defense and committed a turnover.

Hamilton needs to realize that he doesn’t have to be a one-person show like arguably at times in past two seasons. He’s got plenty of help, including capable teammates in the backcourt to feed him the ball.

UNLV got little production from its point guards last year, but seems to have found some answers in McCabe (an accomplished passer), Gilbert (an elite defender) and Marvin Coleman, who is back from a season-ending injury in 2020-21.

Mix in strong performances from Donovan Williams (eight points including a crucial 3-pointer) and Michael Nuga (10 points and six rebounds) and the Rebels have the makings of a capable team. You can argue, in fact, that this is most competitive team they have fielded in the past five or six seasons.

Two in a row: UNLV football wins ugly against Hawaii