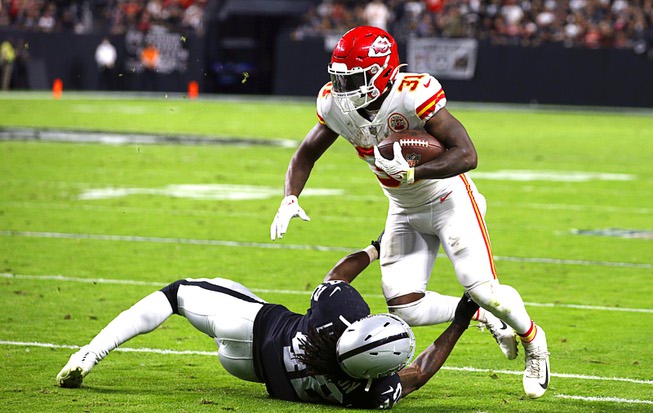 Instant analysis: Raiders no match for Mahomes in 41-14 loss

Las Vegas Raiders outside linebacker Cory Littleton (42) pulls down Kansas City Chiefs running back Darrel Williams (31) during the first half of an NFL football game at Allegiant Stadium Sunday, Nov. 14, 2021.

Is the Raiders’ season slipping away—again?

Sunday night’s 41-14 loss to Kansas City at Allegiant Stadium dropped Las Vegas to 5-4 on the year, and back-to-back defeats have this campaign taking on a similar feel to 2020, when a promising 6-3 start was wiped out by a disappointing 2-5 finish that left the silver and black on the outside looking in at the playoffs.

The Raiders’ off-field circumstances in recent weeks haven’t helped matters, but what went wrong between the lines on Sunday night?

Chiefs quarterback Patrick Mahomes has turned the big play into an art form during his five years in the league, and opposing teams thought they had caught on. “The book” on Mahomes posited that if the defense eliminated long passes and forced him to take shorter available throws, the former MVP wouldn’t be patient enough to sustain long scoring drives.

That blueprint may have worked earlier in the season, but Mahomes has apparently learned his lesson. The Raiders tried to throw the book at him on Sunday and Mahomes was all too willing to check down to underneath routes and throw screen passes all night, dinking and dunking the Las Vegas defense to death.

While the Raiders mostly rushed four defensive linemen and played deep coverage, Mahomes completed 10 passes to his running backs and numerous other short throws to his receivers and tight ends. His patience paid off, as he led extended touchdown drives of 11, 10 and 13 plays to grind the Raiders’ defense to dust. For the game, Mahomes hit on 35-of-50 passes for 406 yards and five touchdowns. So much for the book.

Mahomes and the Chiefs have adapted to how the league is defending them. The Raiders will have to mix up their game plan for the rematch in four weeks or suffer a similar fate.

After scoring 30-plus points in four of their first seven games (all victories), the Raiders have been held to 30 total points over the last two weeks (both losses). If that wasn’t enough reason to worry, Sunday’s performance against a Kansas City defense widely considered among the worst in the NFL should have fans reaching for the panic button.

The Raiders inability to establish any kind of ground game was especially egregious. Kansas City came in allowing 4.7 yards per rush, 29th in the NFL, and Raiders running backs produced a measly 32 yards on 11 carries.

A lot of the blame falls on the offensive line, as that unit failed to open consistent running lanes and also committed some harmful penalties. And the Raiders are clearly still adjusting to life without deep threat Henry Ruggs (see below). But this is supposed to be an offensive team, and 14 points against the worst defense in the league isn’t going to get it done.

Derek Carr had a so-so game (25-of-35, 261 yards, two touchdowns, one interception) but he can’t be expected to carry the offense by himself. A productive running game over the next seven games is a must if the Raiders want to make the playoffs.

For anyone who expected Desean Jackson to walk into Allegiant Stadium in his first week with the team and replace Henry Ruggs, Sunday’s game showed that it’s not as simple as an exact 1-for-1 substitution.

Jackson didn’t see a ton of snaps and was only targeted once in the passing game. The good news is that he still has his top-end speed, as he was able to pull away from the defense on a deep route and haul in a 40-yard pass from Derek Carr late in the third quarter. The bad news is that Jackson then fumbled the ball away to Kansas City, leading to a possible 10-point swing that ultimately put the game away.

Even at 34 years old, Jackson can still run and stretch the field. But despite his veteran status, he is definitely going to need some time to get acclimated to his role with the Raiders before he can be expected to make any kind of impact.