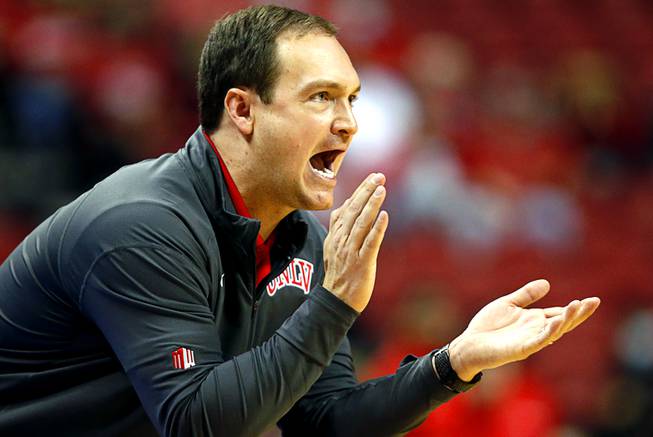 UNLV has started the season 2-0 for the first time since 2017-18, and Kevin Kruger and company will attempt to keep the early momentum going when the scarlet and gray host North Dakota State today (7 p.m., Yurview).

Keep Hamm on the floor

UNLV big man Royce Hamm has been a revelation in the first two games, averaging 12.5 points, 12.0 rebounds and 3.0 blocks, but he ran into some trouble on Saturday against Cal — foul trouble, to be specific.

After logging 30 minutes in the opener, Hamm picked up four fouls against Cal and was limited to 21 minutes. He still came up big down the stretch, including a game-saving block in the final seconds, but Kruger surely wants Hamm anchoring the defense for more than 21 minutes. With Hamm on the floor this season, UNLV is outscoring opponents 75-65; without him, the scarlet and gray have been outscored 45-44.

This is the first time in Hamm’s career he has been counted on to play extended minutes. He never averaged more than 12.3 per game at Texas, so perhaps he needs to gain some experience and learn how to play without picking up needless fouls. The sooner he figures that out, the better off UNLV will be because it looks like this team plays its best with Hamm in the lineup.

As he said in the preseason, Kruger is playing a large rotation, preferring to keep players fresh with frequent substitutions. He is also using the early part of the schedule to tinker with his rotation options.

In the season opener, Kruger employed 21 different lineups, which is tied for the most lineups T.J. Otzelberger used in any game last season. Against Cal, Kruger trimmed it to 17 lineups, but this is all being done with power forward Victor Iwuakor sidelined with an arm injury; once he becomes available he is expected to play a significant role.

Don’t underestimate North Dakota State as a non-conference opponent. The Bison are No. 127 in the KenPom rankings, which is two spots ahead of UNLV at 129, so this is a game that could go either way.

North Dakota State is a team that likes to play at its own pace (No. 335 in adjusted tempo), and much like UNLV they have struggled to shoot the ball in the early going (26.4 3FG%). It’s not hard to imagine this one turning into a slow, grind-it-out affair that comes down to the final possessions, but that kind of game seems to suit this new defense-and-toughness UNLV squad just fine.